20 People of the 20s is part of 20sPeople – our season to mark the release of the 1921 Census, connecting the 1920s and the 2020s. This story was researched by Keith Mitchell, Volunteer Projects Officer. 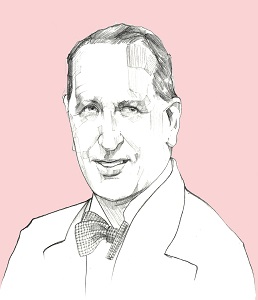 An illustration of Noel Curtis-Bennett, created from a photograph. By Sophie Glover.

Sir Noel Curtis-Bennett, son of Sir Henry Curtis-Bennett, the Chief Metropolitan Magistrate of his day, was educated at Tonbridge, and had some training in estate management before appointment as an Inspector under the Board of Agriculture and Fisheries in 1905. Between about 1910 and 1911 he served as the private secretary to Lord Lucas, Parliamentary Secretary to the Board. He was transferred to the National Health Insurance Commission in 1911, joining the Ministry of Health on its formation in 1920; this is his listed employer on his 1921 Census return.

Noel served in the Civil Commissioner’s Department from 1925 to 1930, before becoming Assistant Secretary of the Treasury in 1930. He was created Commander to the Royal Victorian Order (C.V.O) in 1926 and Knight Commander to the Royal Victorian Order (K.C.V.O) in 1932. He spoke on behalf of the National Savings Committee from 1939 until his retirement in 1942, touring the country and speaking to a great variety of audiences.

Noel will be remembered most of all for his work to improve the lives of others. In co-operation with a few colleagues who were unimpressed with the lack of co-ordination of sports in the Civil Service, the lack of competitiveness and the need for adequate facilities, he formed the Civil Service Sports Council in 1921. He was its first treasurer, but quickly took on the mantle of vice-chairman; he remained vice-chairman for 25 years, during which time he took a leading part in organising the work of the Council.

The Council flourished, and, when Noel became chairman in 1942, there was a membership of 50,000. Grounds had been provided in numerous centres, associations formed, and competitions arranged in all major sports. Representative games were regularly played (until the outbreak of the Second World War) against other Crown Services, and the standard of performance improved immeasurably. Noel became vice-president on relinquishing the chairmanship in 1944.

Just as his love for his colleagues led him to devote so much of his time to their wellbeing, his natural compassion led him to work in many areas outside the Civil Service, in particular improving sport facilities and healthy outdoor recreation as a means of furthering general welfare.

He was one of the founders and the first treasurer of the National Playing Fields Association, a role which he retained for over 20 years, when he became Chairman. He was also instrumental to the National Association of Boys Clubs, the Joint Committee of the National Trust, the National Council of Social Service, among many others. Despite these commitments, he found time to serve as Vice-Chairman of the British Olympic Council, a member of the International Olympic Committee, and a Governor of the London Hospital.

Noel was driven by his faith in the value of work as a contribution to national wellbeing, his hope for a better future for the nation, and his deep sense of compassion for all people; with the conviction to ‘strengthen the moral, spiritual and physical qualities of all men and women’.