20 People of the 20s is part of 20sPeople – our season to mark the release of the 1921 Census, connecting the 1920s and the 2020s. This story was researched by Vicky Iglikowski-Broad, Principal Records Specialist of Diverse Histories.

The dancer who hosted illicit parties 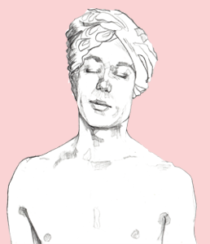 An illustration of Robert (Bobby) Hector Britt, created from a photograph. By Sophie Glover.

Robert Britt, often known to his friends as Bobby, was born on 9 February 1900 in Camberwell, London. At one year old, he is listed in the 1901 census as living at 56 George Street, Camberwell, with his parents Martha and Frederick Britt and his six siblings. The Britts’ were a working class family, with family members doing jobs ranging from bakers, bricklayers, zinc workers and even a ‘feather curler’ (someone who curled feathers for preparation in hat making).

By 1911 the family had moved to 77 Grosvenor Terrace, St Mary Newington. At this point Bobby was in school, two of his siblings seem to have moved out and two of his sisters had gained occupations, as a dressmaker and cigarette maker. 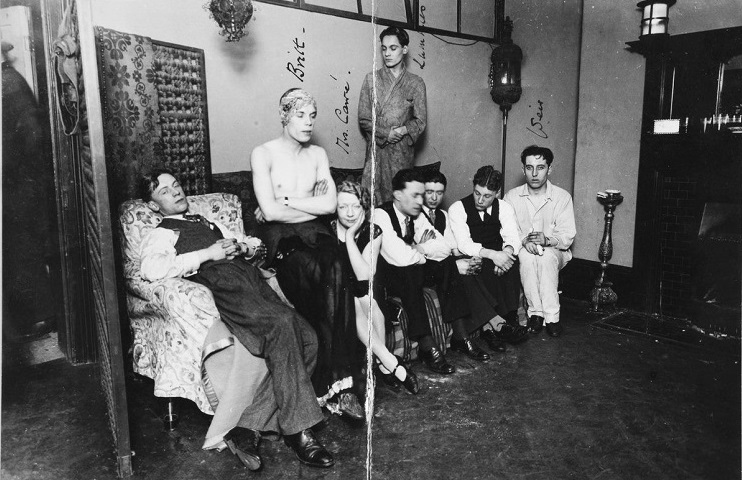 Robert Britt (Bobby, second left) with friends. Constance Carre is on his right. From the police raid on Fitzroy Square, used as evidence. (catalogue ref: CRIM 1/387)

In the early 1920s Bobby worked as a valet, which is the occupation listed against his name on the 1921 Census; but he grew tired of the long hours and unfulfilling work, so turned to his passion: the stage.

However, the primary reason Bobby is notable in our records is due to his relationships with other men. While many people would have had same-sex relationships in this period, they would most often have been forced to keep it secret; while it was not actually a criminal offence for women – such as Maud Allan and Marguerite Radclyffe-Hall – to enter into same-sex relations, it was a criminal offence for men. Regardless, both Maud and Marguerite were vilified for their sexual relations, despite no evidence of Maud’s orientation. In 1885, the legislation was extended under Section 11 of the Criminal Law Amendment Act, commonly known as the Labouchere Amendment. This act made “gross indecency” between men a crime, essentially extending the actions that were seen as criminal in the eyes of the law.

By 1926, Bobby was a dancer in the chorus of the West End hit show ‘Lady Be Good’, living in the basement flat of 25 Fitzroy Square, Fitzrovia, where he hosted illicit parties with his working class gay friends. Bobby lived here with Constance Carre, a French national, who seems to have owned the flat; at times they would pretend to be married, with Constance using Bobby’s surname.

The pair invited friends, and encouraged friends to bring others, to private performances of Bobby’s dances. Police monitored the flat in the winter of 1926 to 1927, noting that the male individuals in attendance were often dancing, singing, kissing and cuddling, sometimes naked. Most of these observations came from the street outside or from the basement roof. Bobby had even been observed by police at the time of his work at the Empire Theatre.

Eventually the flat was raided on 16 January 1927, after an extensive and lengthy observation.

The subsequent court case took place at the Central Criminal Court, on 8 February 1927. The individuals present, including Bobby, were accused of:

All the defendants pleaded not guilty. Bobby was charged with ‘keeping a disorderly house’, and received the most serious sentence of 15 months hard labour.

During the raid a number of illicit letters were found, written between men; some were love letters, others letters between gay friends, talking about their love lives with friends in America. Records show that shortly after their prison sentences, in 1929, both Bobby and his nephew Bert travelled to New York, possibly to meet these friends.

The 1939 Register describes Bobby as ‘single’, employed as a dancer and living in Paddington. Further records suggest that Bobby lived to be 100. He remained a professional dancer on the stage, appearing in a number of West End and Broadway shows throughout his life.
Bobby had been born in 1900 and would have lived through many changes in the law. For a significant period of Bobby’s life, the 1967 Sexual Offences Act would have been in force, which decriminalised private homosexual acts. Hopefully this enabled Bobby to live his life more openly.
All over the country the census will show men and women who loved, or were attracted to, people of the same sex. For many of these people we will never know about their sexuality, but cases like Bobby’s are a powerful reminder that they existed, whether it is now clear to us or not.