20 People of the 20s is part of 20sPeople – our season to mark the release of the 1921 Census, connecting the 1920s and the 2020s. This story was researched by Kevin Searle, Modern Domestic Records Specialist. 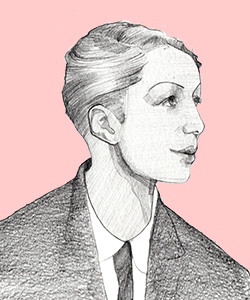 An illustration of Evelyn Dove, created from a photograph. By Sophie Glover.

The singer Evelyn Dove achieved a number of firsts throughout the course of her lifetime. Perhaps most notably, she was the first woman of African heritage to be broadcast on BBC Radio in 1925, three years after its launch.

Evelyn was born in London on 11 January 1902 to Francis Dove, a barrister from Sierra Leone, and a white British mother, Augusta.

References to Evelyn appear in a number of places at The National Archives. Evelyn, along with her mother and brother, Frank, is listed in 1910 among the passengers on the ship, Zungeru, where they disembarked at Plymouth in September of that year. It is likely that they were visiting Francis, who spent much of his life working in Ghana.

She then appears with her mother on the 1911 Census, living at 25a Barnard Road, Battersea, South London. This census entry also includes a servant, which attests to the Dove family’s middle class background – something which wasn’t entirely unusual among Britain’s Black Edwardian population [1]. Composer Samuel Coleridge-Taylor provides one of the best known examples, born to a Sierra Leonean doctor and white British mother.

Evelyn trained at the Royal Academy of Music as a contralto (the lowest female voice type, whereas soprano is the highest) and had aspirations to become an opera singer. However, she found the world of jazz and cabaret more accommodating.

By the time of the 1921 Census, she was performing in The Southern Syncopated Orchestra, a band largely comprised of Caribbean, West African and African American performers. Her name appears as Evelyn Augusta Luke, having married Milton Alphonso Luke in 1919. 1921 was also the year the ship that she was travelling on, the SS Rowan, sunk while travelling to Ireland. Thirty-five people, including nine members of the orchestra, tragically lost their lives.

Evelyn’s performances took her to many places, both in Europe and beyond. She wowed crowds in America, where she performed in New York at the legendary Connie’s Inn; dazzled audiences in Europe, including at The Casino de Paris, where she succeeded Josephine Baker; and even went as far as The Harbour Bar, at the Taj Mahal Palace, Mumbai.

Many of these performances were problematic. Despite Evelyn’s remarkable talent, there was a distinct pressure for Black entertainers to act out stereotypical roles for white audiences; production titles include ‘Chocolate Kiddies’, for example. Her own song and dance troupe speaks volumes about these racial tropes, named ‘Evelyn Dove and Her Plantation Creoles’, despite her being British and growing up in a middle-class family in Battersea.

The outbreak of the Second World War meant a change of focus for Evelyn, and although her entry on the 1939 Register lists her as a ‘travelling variety artiste’, much of this travelling was now done within the UK music hall circuit.

Evelyn also found work on BBC radio, appearing in numerous productions. In 1939, she was also given her own music series, ‘Sweet and Lovely’. She co-hosted ‘Rhapsody in Black’ with African American singer Elisabeth Welch in 1940, before hosting ‘Serenade in Sepia’, with Trinidadian folk singer Edric Conner in 1945; ‘Serenade’ ran for forty-five weeks, proving so popular that it was also aired on television.

Dove passed away in 1987. Despite her fame during the height of her career, she was little-known at the time of her death, and not commemorated in any obituary columns. Her trailblazing contributions to music, and legacy, have since been expertly documented by the historian Stephen Bourne, who wrote the biography Evelyn Dove: Britain’s Black Cabaret Queen, in 2016. Evelyn also featured as a ‘Google Doodle’ on the 117th anniversary of her birth, in 2019.

Read our blog to find out how Findmypast prepared millions of records just like Evelyn’s for digitisation: Conserving the 1921 Census