’20 People of the 20s’ is part of 20sPeople – our season to mark the release of the 1921 Census, connecting the 1920s and the 2020s. Researched by Paul Dryburgh, Principal Records Specialist at The National Archives. Dorothy Fahey was Paul’s maternal grandmother.

The baby born just before the Census 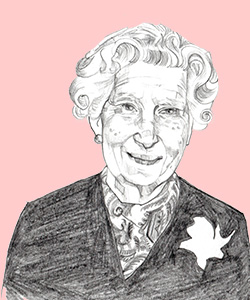 An illustration of Dorothy Fahey created from a photograph. By Sophie Glover.

Dorothy was born in April 1921 in Lincoln, the daughter of Herbert James Arthur Fahey and his wife Annie, née Fisher. When the census enumerators (those responsible for collecting census data) called on 19 June of that year, Dorothy would potentially have been one of the youngest individuals recorded, at barely 10 weeks old. In fact, it’s only because the census was delayed – it was due to be taken on 24 April – that Dorothy appears at all.

She is recorded as living at 4 Blundells Court, a street near the city’s corn exchange, now lost after clearance of the area in the interwar period. Dorothy was the third eldest of 10 children behind her brother Victory, himself born, not coincidentally, in June 1919 as the nation celebrated the defeat of Germany and her allies. 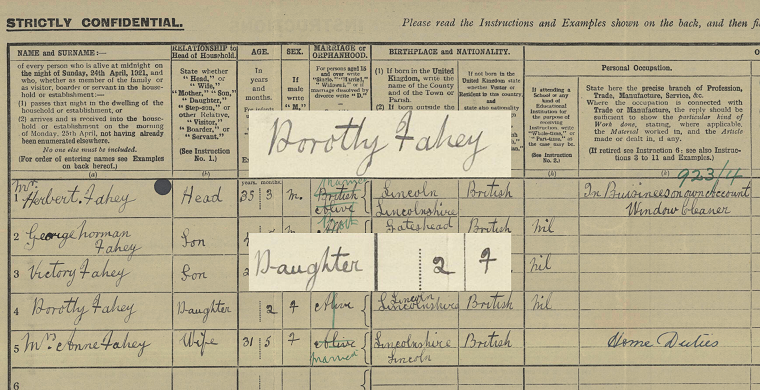 Dorothy Fahey’s 1921 Census record, showing her age as 2 months and 4 days. The field to the left of the two is the blank ‘year’ column.

Lincoln, a great medieval city at the centre of one of England’s most productive agricultural counties, was vital to the heavy industry of the recent war effort. The family appears to have taken employment in both sectors before and after Dorothy’s birth.

By 1939, Herbert was working as a general labourer, having previously worked as a merchant’s runner in the city’s corn exchange in his teens. Two of his sons are recorded in 1939 as working as lathe machinists in the city’s iron foundries. Dorothy herself, like her mother, is recorded as doing ’unpaid domestic duties’, perhaps helping her mother look after younger siblings. During the Second World War she worked in the city’s munitions factories helping the war effort. She also worked in the food industry, taking employment at a canning factory in Bardney, where she presumably first met her future husband, Cyril.

The Faheys were second-generation migrants from Ireland, and the family’s story is far from uncommon in late Victorian and early 20th-century Britain. They were a military and musical family. Herbert’s parents, Michael and Mary Anne, appear to have arrived in England at some point in the 1870s. Michael had served as a bandsman in the 89th Regiment based in Dublin before being posted to Athlone where their eldest daughter Dorothea, Dorothy’s aunt and probable namesake, was born in 1869. By 1881 Michael had moved the family to Bath, where he served with the Somerset Militia, and then, by the time of Herbert’s birth around 1886, to Lincoln.

By 1891, he and his wife are listed in the census as musicians. It seems that musical and creative talent ran in the family: Dorothy loved to play the organ and one of her younger brothers, Bert (aka Toot), is locally renowned in and around Lincoln for his Lincolnshire Ditties.

Although Herbert did not pursue his father’s military vocation, he did enlist as a private with the Sherwood Foresters following the outbreak of war in 1914. He entered the conflict in Egypt late in 1915 following the battalion’s service in Gallipoli. The battalion later arrived in France 10 days after the launch of the Somme offensive of 1916, so it is possible Herbert witnessed two of the most devastating campaigns of the First World War. Things are unlikely to have improved after he joined the Prince of Wales’ Own (West Yorkshire) Regiment for the assault on the Hindenburg Line early in 1917. He was awarded the Silver War Badge, the honour granted to servicemen invalided in war, being discharged permanently on 2 April 1917 on the grounds of ‘sickness’, a description covering a multitude of possible illnesses not caused by military wounds. Awarded to over 700,000 imperial troops, the badge also acted as a symbol that an apparently able-bodied man had fulfilled his patriotic duty and prevented accusations of cowardice or conscientious objection. 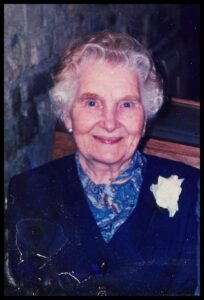 At some point after 1921, it appears the family lived in the Newport area of uphill Lincoln, just outside the ancient city walls and close to the city’s magnificent cathedral. However, between the wars, like tens of thousands of families across Britain, they were able to move into new, purpose-built council housing, in their case on the St Giles estate further north. The estate, inspired by the Garden Suburb movement and prompted by the Addison Act of 1919 – which aimed to build half a million new homes in short order – provided green spaces, front and rear gardens, and a more comfortable style of living. This is where they were living at the time of the next great population survey, the 1939 Register.

Like Dorothy almost didn’t feature, it’s possible people you expect to see will be hard to find. Read our blog to find out why this could be: Missing from the census?.

20 People of the 20s is a project where staff members at The National Archives have researched a story of someone from the 1920s. From family members and First World War service personnel, to famous performers and politicians, we hope these stories will encourage you to explore the breadth of experience in 1920s Britain. ’20 People of the 20s’ is part of 20sPeople – our season to mark the release of the 1921 Census, connecting the 1920s and the 2020s. Find out more here.