20 People of the 20s is part of 20sPeople – our season to mark the release of the 1921 Census, connecting the 1920s and the 2020s. This story was researched by Vicky Iglikowski-Broad, Principal Records Specialist of Diverse Histories.

The dancer, accused of participating in a ‘cult’ of women 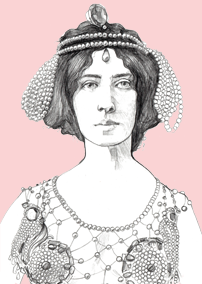 An illustration of Maud Allan dressed as Salome, created from a photograph. By Sophie Glover.

Maud Allan was born Ulla Maude Durrant in around 1873. Born in Canada, she travelled to Europe, and in the early 20th century, became a much-celebrated dancer on the West End stage. By 1906 she was attracting audiences in the headline role of a production of ‘Salome’, based on Oscar Wilde’s controversial play about the biblical figure. Salome was said to have danced before Herod with the head of John the Baptist on a silver plate. Allan quickly became renowned for her seductive dance based on this play.

By 1918 she had reprised the role, working with the Dutch theatre impresario J T Grein. To be an audience member of Allan’s private performance of Salome, spectators had to apply to ‘9 Duke Street, Adelphi, W6’. This was a way of escaping the censorship of the Lord Chamberlain, who had banned Oscar Wilde’s works in the aftermath of his trial. An advertisement for the performance was printed in the Sunday Times: 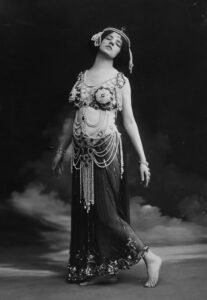 Unfortunately, this prompted a backlash from MP Noel Pemberton-Billing, who owned a right-wing newspaper called ‘The Vigilante’. In the pages of this publication, Pemberton-Billing wrote an article under the sensational headline, ‘The Cult of the Clitoris’. Pemberton-Billing used this article to harshly critique Allan’s upcoming performance and implied that Allan was a lesbian, and a member of a ‘cult’ of women who loved women. While relationships between women were never illegal, unlike homosexual acts between men, it was nevertheless socially unacceptable and attracted controversy. Marguerite Radclyffe-Hall, another of our 20 People of the 20s, arguably had her homosexual relations examined at the obscenity trial of her controversial book, ‘The Well of Loneliness’, to the same degree as the book itself. Even more shockingly, Pemberton-Billing accused Allan of having an affair with Margaret Asquith, the former Prime Minister’s wife. These accusations threatened to have a serious effect on Allan’s career, and so she took Pemberton-Billing to court.

The trial ran over six days; The National Archives holds the records for this case, as well as associated court records, Home Office files and correspondence around other unlicensed plays in this era. Pemberton-Billing made the trial even more of a spectacle by providing his own defence. 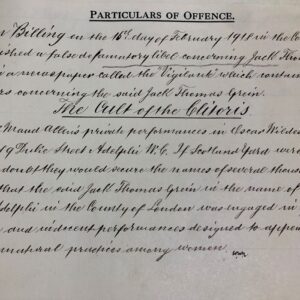 Rather than focusing on the libel accusation, the presiding judge seemed more concerned that the uncensored play was being performed on stage. In his closing statement, the judge noted that the costume Allan wore for her performance was ‘in fact …worse than nothing’. Despite being the plaintiff, Allan herself seemed to be on trial. Ultimately the jury found Pemberton-Billing not guilty, at which there was said to be a great outburst of cheering in the gallery.

Despite Allan’s strenuous denial of Pemberton-Billing’s accusations, Margaret Asquith paid for her apartment overlooking Regent’s Park, until Herbert Asquith’s death in the late 1920s. Furthermore, it was in this apartment that Allan lived with Verna Aldrich, her secretary and lover.

Allan eventually settled in Los Angeles during the Second World War and worked in the aircraft industry. She continued to take to the stage throughout her life. She died in Los Angeles at the age 83 in 1956.

If you have been intrigued by this story, you can learn about Maud Allan’s life here: LGBTQ+ history: Maud Allan and ‘unnatural practices among women’
If you are looking for records on LGBTQ+ history, this research guide is a great place to start: Sexuality and gender identity history research guide