20 People of the 20s is part of 20sPeople – our season to mark the release of the 1921 Census, connecting the 1920s and the 2020s. This story was researched by Mark Dunton, Principal Records Specialist. Mark’s research interests include British Prime Ministers of the 20th century. 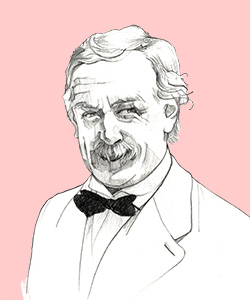 An illustration of David Lloyd George, drawn from a photograph.. By Sophie Glover.

David Lloyd George (christened David George) was born in 1863. His Welsh parents, William and Elizabeth George, moved the family to Pembrokeshire not long after Lloyd George’s birth, due to his father’s ill health. William died of pneumonia shortly after, when David was just an infant. Elizabeth moved the family again, this time to her native Caernarfonshire. His uncle, Richard Lloyd, lived nearby, working as a cobbler. He formed a close bond with Lloyd George, becoming a pivotal influence on him during this period. This led to his nephew adding his uncle’s surname to his own, and in so doing becoming David Lloyd George. He excelled in his studies and qualified as a solicitor, joining a firm in Porthmadog in 1884. 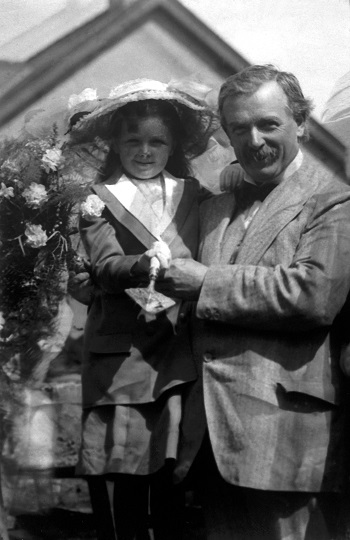 Lloyd George with his daughter, Megan (1911)

A few years later, in 1890, Lloyd George was elected as a Liberal MP for Caernarvon. Aged just 27 when elected, he held a seat he held the seat for 55 years, until his death in 1945. Lloyd George took no time in establishing himself as a radical in Parliament, his searing wit establishing him as an opponent to be respected. He gained further infamy for his stand against the Second Boer War (1899-1902). His radicalism was evidenced in his ‘people’s budget’ of 1909, which proposed to provide social insurance, in part through radical land and income tax changes for the upper classes. The bill was advocated for chiefly by Lloyd George and Winston Churchill, at that point a Liberal MP; the pair were dubbed the ‘terrible twins’ by some less favourable Conservative Party members. The bill passed in 1910, after initially being rebuffed by the House of Lords. His attitude in these instances led him to gain a reputation as ‘the man who got things done’. He sought to combat poverty, and presided over milestones that include the introduction of old age pensions in 1908 and National Insurance in 1911.

His views didn’t discourage his peers from entrusting him with high-profile roles; he was appointed president of the Board of Trade in 1905, Chancellor of the Exchequer in 1908, Minister of Munitions in 1915, and Secretary of State for War in 1916. The latter two were performed as part of H.H. Asquith’s wartime coalition, whom Lloyd George became increasingly critical of during the First World War, having been a stern supporter previously. Lloyd George was subsequently elected Prime Minister in December 1916 – the first and, currently, only Welshman to hold the title. His 1921 Census record, perhaps unsurprisingly, lists his residence as 10 Downing Street – the original of which can be seen at our exhibition, ‘The 1920s: Beyond the Roar’. 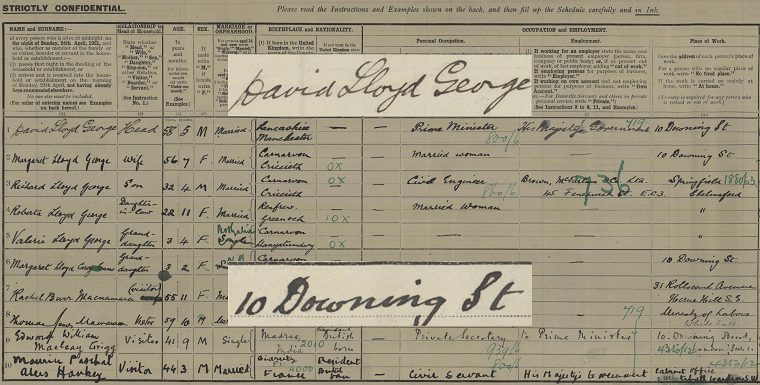 During the remainder of the war, he was highly successful in mobilising Britain’s resources. Post-war, Lloyd George was Britain’s primary representative during the drafting of the Versailles Treaty, as well as being instrumental in the creation of the Irish Free State following three years of war. Our replica Cabinet table, which features selected records of the 20 prime ministers of the 20th century, is a great place to find out more about Lloyd George’s premiership.

However, his reputation suffered after these milestones due to an honours scandal that came to light in 1922, in which he was implicated in a plan to sell knighthoods and peerages. The Conservatives – on which Lloyd George was reliant as part of his coalition government – withdrew their support over British foreign policy, leading to his resignation. He remained in Parliament until his death, although not the influential force he once was. He died aged 82, a year after being made Earl Lloyd-George of Dwyfor.

Lloyd-George is the last Prime Minister for 30 years to be captured in census records; discover why here: What’s interesting about the 1921 Census

Our exhibition tours are a great way to learn more about life in the 1920s, giving you the chance to ask questions as you get up close with David Lloyd George’s census return. Book a tour here: ‘Beyond the Roar’ exhibition tours Tickets, Multiple Dates | Eventbrite