20 People of the 20s is part of 20sPeople – our season to mark the release of the 1921 Census, connecting the 1920s and the 2020s. This story was researched by Eleanor, Reader Adviser at The National Archives, and Frank’s great-granddaughter.

The footballer and captain of the England team 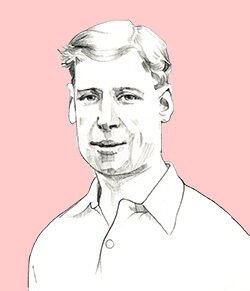 An illustration of Frank Moss, drawn from a photograph. By Sophie Glover.

Born in Aston in 1895 -the same year the original FA Cup trophy was stolen in Birmingham – Frank Moss grew up a stone’s throw from Villa Park.

Football had a strong influence on Frank Moss in school, his teacher being an ex-Aston Villa player. Frank dreamt of playing for Aston Villa and England, often neglecting his schoolwork to practice with any makeshift football he could find. He told of how on Saturday mornings he would play for his Burlington Street school team, and in the afternoon sneak into Villa Park by crawling between spectators’ legs. 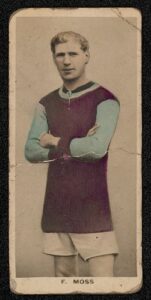 Although representing the England Boys and Aston Manor clubs by this time, on the 1911 Census, at the age of 15, Frank is listed as a canal boatman along with his father and elder brother. He signed professional terms for Walsall in 1912 and transferred to Aston Villa in 1914, before the outbreak of the First World War.

When play was suspended in 1915 – not to resume for the duration of the war – his dream was cut short. A year after his first match in the claret and blue of Aston Villa, he was fighting in France. His football career was further put in jeopardy when he was wounded in his left knee during the Third Battle of Ypres, causing him to be sent back to England to recover.

Irrespective of the fragment of shrapnel lodged in his left knee, Frank continued his footballing career. In 1920, he played in the first FA Cup Final since the First World War. After the horrors of the war, the return of footballing competitions brought a sense of normality, albeit sombre. He helped Villa win 1-0 against Huddersfield, in the first ever FA Cup Final won in extra time. 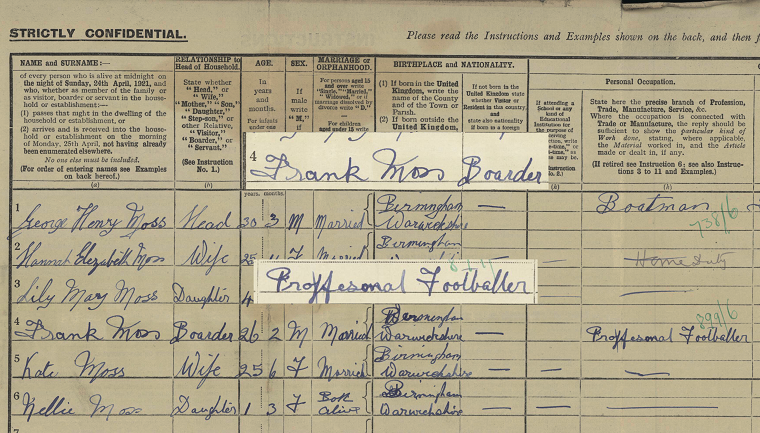 Frank Moss is listed as a Professional Footballer, employed by Aston Villa Football Club, boarding in Aston, Birmingham, on the 1921 Census.

Frank went on to become the first captain of the England team to lead his side out at the newly built Empire Stadium in Wembley, when they played against Scotland. Two weeks later, he captained Aston Villa at the same ground for the 1924 FA Cup Final, as part of the British Empire Exhibition. This time fans were ‘earnestly’ reminded to stay in their seats if the match continued past 90 minutes.

Frank Moss made a total of 283 appearances for Aston Villa and captained England five times up to the end of the 1920s, gaining a reputation as one of the best half-backs in the country. He wore one pair of football boots during his entire club career – a pair that had been discarded by another player. 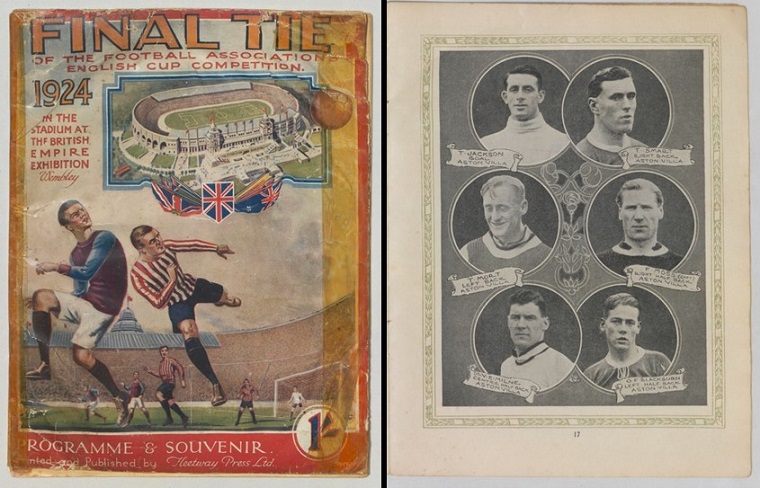 The original 1924 FA Cup Final programme cover and feature of Frank Moss (middle right). Due to the weather on the day, many spectators used their programme as an umbrella (from family’s own collection).

Ten years after being injured in the First World War, he underwent much-needed cartilage surgery on his knee. When the surgeon suggested it was a good opportunity to also remove the shrapnel, Frank declined and instead carried his war relic with him until his death in 1965.

Keen to get stuck in to our First World War records? Read our overview here: First World War research guide
Join our experts as they draw on our military collections and explore how to use them: Researching your family history: Military sources Tickets, Tue 15 Mar 2022 at 14:00 | Eventbrite