Home >  About us > Our role > Transparency > Record transfer report

Please note: This page refers to previous iterations of the Records Transfer Report (RTR) up till 2016. The RTR has now been replaced by the Information Management Report (IMR). You can find the latest information on the IMR here.

Government departments that transfer records to The National Archives provide data on the volume and transfer status of the records they hold. This data has been collected in Spring and Autumn each year, beginning in Autumn 2012. From 2017, departments will provide data once a year (starting from February 2017). The National Archives will use data collected from previous surveys to monitor compliance and assist departments in managing the transfer process and identifying need for additional resources. 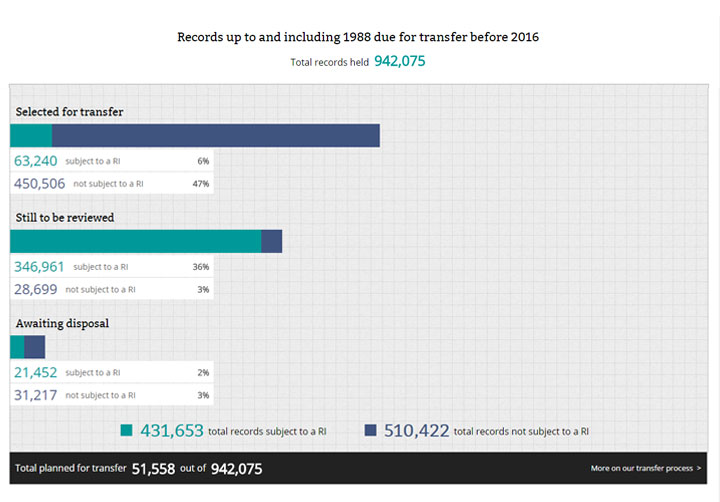 Visualisation of the record transfer report for Autumn 2016

Our data-driven visual display for the top 21 transferring government departments enables easier comparison between legacy, current and future forecasts of departmental record figures, and is designed to be easily viewed on mobile devices.

Government bodies that transfer records to The National Archives provide data on the volume of records they hold in the following categories:

Explanatory comments are given by departments to accompany the survey data with further information provided by some departments on their websites. The number of records shown as being planned for transfer is a forecast of how many records will be transferred to The National Archives by the end of the calendar year.