Home >  About us > Our role > Transparency > Information Management Report

Through the Information Management Report (IMR), The National Archives drives compliance with the Public Records Act (PRA) and Section 46 Code of Practice and monitors the transition to the 20-year rule. On an annual basis, we ask bodies that transfer records to The National Archives to provide data on volume and transfer status of the records they hold. We are currently publishing the data collected in early 2021. This data reflects the position as it was at the end of the calendar year 2020.

The PRA requires central government departments, and certain other public bodies, to identify records of historical value. They will then transfer these records for permanent preservation to The National Archives, or to another appointed place of deposit, by the time they are 30 years old. The Government is reducing this timeframe from 30 to 20 years through the transition to a 20-year-rule taking place over ten years. The transitional arrangements were introduced in 2013. They envisaged public records bodies transferring two years’ worth of records each year until 2022. From 2023 onwards, public bodies will be due to transfer one year’s worth of records each year, as they become 20 years old.

The National Archives asks for input to the Information Management Report (IMR) annually in the first quarter of each calendar year. We publish the results on our website and some public records bodies have published more detailed plans through their own online channels.

The transition to the 20-year rule aims to enable public records bodies to adapt to the requirement to process their records after 20 years by 2023.

The figures presented in the IMR will fluctuate throughout the transition period. This results from review and potentially inheritance of records (as part of Machinery of Government Changes). Furthermore, public bodies develop a better understanding of their holdings as they plan and deliver their responses each year.

The IMR allows a year-by-year comparison of the public record bodies that transfer records to The National Archives and their progress towards the 20-year rule. These bodies provide data on the volume of records they hold in the following categories:

An overview table presents the information for all bodies that submitted an IMR for each year (see downloads below). It is sorted A-Z by the name of the public record body.

In addition, the graphs below summarise the data to show the overall numbers as well as those of the Ministerial Departments, who account for 90% of the records transferred to The National Archives each year. The graphs compare the snapshot of the data for this year’s IMR with previous years. 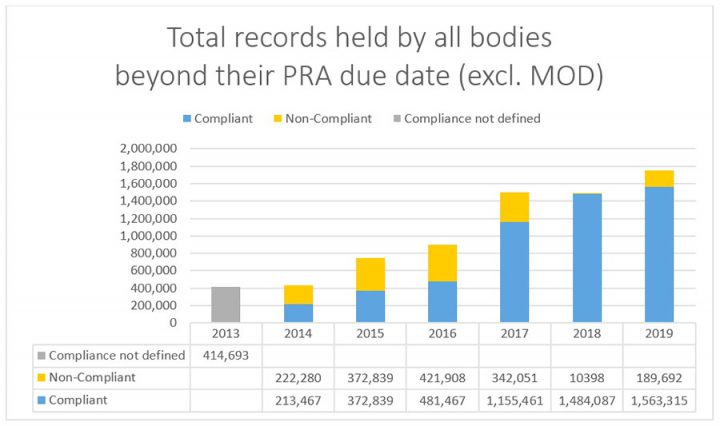 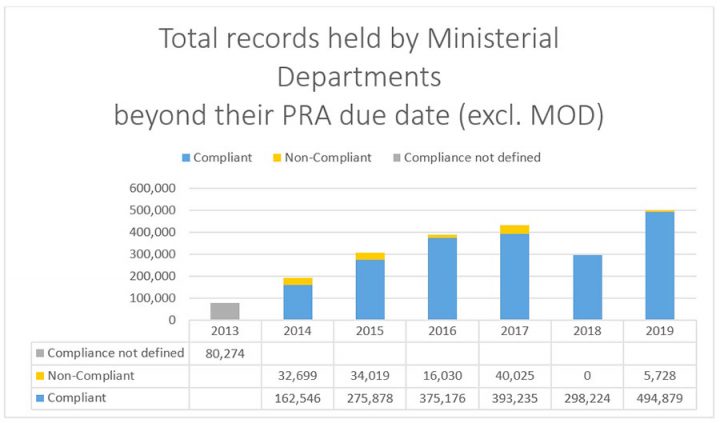 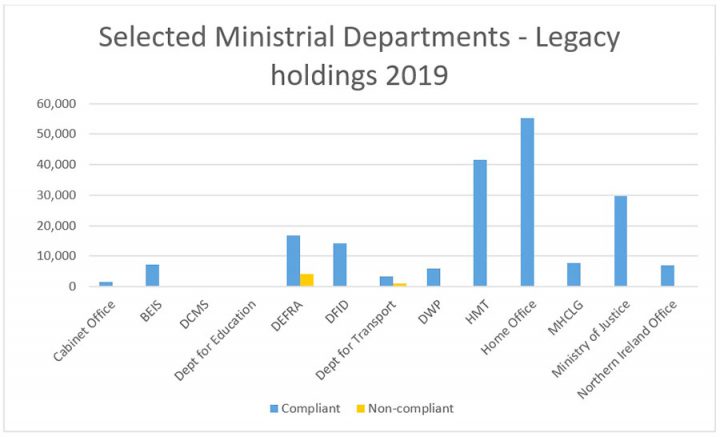 Public records bodies may retain records past their due date. This requires coverage by a Retention Instrument approved by the Secretary of State for Digital, Culture, Media and Sport. For independent advice on questions relating to access to public records the Secretary of State refers to the Advisory Council on National Records and Archives. The grounds on which such retention may be approved are set out here.

The IMR presents the figures provided in two groups. The first group relates to records covered by a Retention Instrument (and thereby compliant with the PRA). The second group are records not covered by a Retention Instrument (and thereby not compliant with the PRA). Public bodies can submit applications for retention throughout the year. These applications are considered quarterly at the meetings of the Advisory Council on National Records and Archives. Therefore compliance figures from the IMR are subject to change.

History of the Information Management Report

The National Archives started gathering information on records holdings via the Record Transfer Report (RTR) in 2012. Traditionally we gathered data twice a year (spring and autumn). The findings were published on our website as part of our commitment to transparency.

The National Archives identified a need to refocus the RTR in 2016 when reaching the halfway point of the transition to the 20-year rule. That data for 2017, 2018 and 2019 is now available here to enable comparison with the data gathered in 2020.

We now ask for input to the IMR in the first quarter of each calendar year and publish the findings on our website.