One of the transports 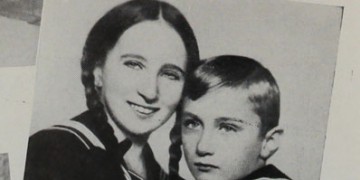 The purpose of this document collection is to allow students and teachers to develop their own questions and lines of historical enquiry. A possible enquiry question would be: ‘What was Britain’s response to the child refugee problem in Nazi occupied countries?’ Again, these sources could be used to support school programmes which use survivor testimony.  Alternatively, teachers may wish to use the collection to develop their own resources or encourage students to ‘curate’ their own ‘exhibition’. We hope that students will be able to develop their powers of evaluation and analysis and support their course work by using these documents. Download images and transcripts for use in the classroom (ZIP, 2 MB)

Links to the curriculum

These documents can be used to support any of the exam board specifications covering, for example:

The Kindertransport was a British scheme to rescue nearly 10,000 predominantly Jewish children from Nazi occupied territories. As a result of Nazi persecution, there was a rise in the number of Jews wanting to emigrate as circumstances for Jews in Germany and its annexed countries changed. The Kindertransport scheme was an opportunity for some of these children to leave their homes and families and seek temporary refuge in Britain.

Realising that the British public were keen to see some action, the scheme to bring over a large number of children was given the go-ahead. Visa and passport restrictions were lifted and children of seventeen and younger were able to enter Britain with a ‘white card’. The majority of children had ‘guarantors’ who would cover the re-emigration costs. These guarantors were mostly people who had some kind of connection with the families of the refugees or who had responded to the many advertisements in the newspaper, the Jewish Chronicle from families seeking help. But, at a time of uncertainty in employment and with the country on the brink of war, few households could pay the sum of £50 required, the equivalent of £2000 today. Financing the ‘unguaranteed’ children, those who did not have a previously arranged place of stay, became the responsibility of the Movement for the Care of Children in Germany, later known as the Refugee Children’s Movement. The R.C.M. relied on charitable donations alone as it had been previously agreed with the Home Secretary that no refugee child would become a burden on state finances.

The children arrived from December 1938 to September 1939. With the outbreak of war, borders were closed and all transports ceased. The most reported reason for the ending of transports was that the R.C.M. had run out of funds. Rising unemployment, anti-semitism and the concern that German refugees were now regarded as ‘enemy aliens’ were issues which concerned the Government.

Britain’s policy of internment came into force in May 1940. This affected older child refugees who had reached the age of sixteen before 1940.  These children found work in agriculture and domestic service or joined the Pioneer Corps and other Auxiliary Services. Only a small number were interned.

Each year presented the R.C.M. with new challenges which meant changes in policies and changes within the organisation. Questions of finance, welfare and religious upbringing were issues which aroused criticism and conflict. Although its main aim was to re-unite the refugee children with their parents, as the war continued and news of the persecution and mass murder of the Jews reached the United Kingdom, it became apparent this was becoming increasingly unlikely. Re-emigration became uncertain.

The priorities of the R.C.M. now focused on the administration and care of those children who had arrived before the outbreak of war. By April 1943 the number of children according to the R.C.M.’s annual report totalled 8274. The Guardianship Act was passed in 1944 to provide care for those children who were not adopted, unmarried or under the age of 21. This was to ensure that those children who arrived in Britain to escape Nazi persecution would continue to be supported.

In very few cases the refugees were united with their loved ones. This action to rescue refugee children from Nazi persecution later became known as “Kindertransport”.

Was Hitler a 'passionate lunatic'?

German occupation of the Rhineland

What should Britain do about it?

Key documents from The National Archives