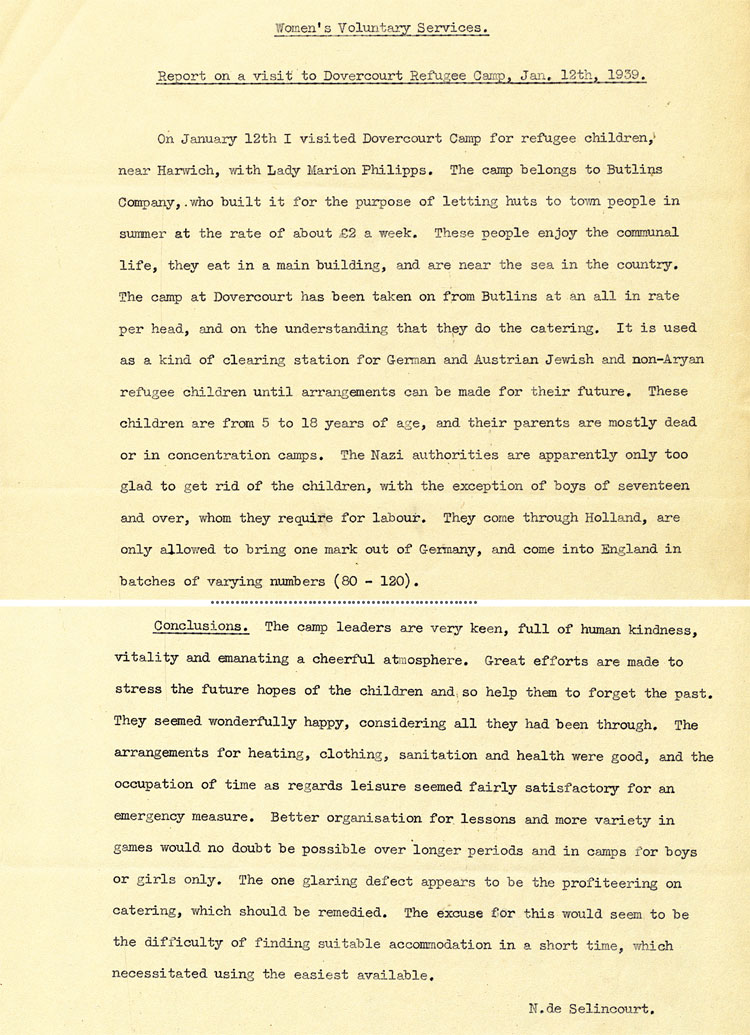 Report on a visit to Dovercourt Refugee Camp, Jan. 12th, 1939
On January 12th I visited Dovercourt Camp for refugee children, near Harwich, with Lady Marion Phillips. The camp belongs to Butlins Company, who built it for the purpose of letting huts to town people in summer at the rate of £2 a week. These people enjoy the communal life, they eat in the main building, and are near the sea in the country. The camp at Dovercourt has been taken on from Butlins at an all rate
per head, and on the understanding that they do the catering. It is used as a kind of clearing station for German and Austrian Jewish and non-Aryan refugee children until arrangements can be made for their future. These children are from 5-18 years of age, and their parents are mostly dead or in concentration camps. The Nazi authorities are apparently only too glad to get rid of the children, with the exception of boys of seventeen and over, whom they require for labour. They come into England in batches of varying numbers (80-120).

Conclusions. The camp leaders are very keen, full of human kindness, vitality and emanating a cheerful atmosphere. Great efforts are made to stress the future hopes of the children and so help them to forget the past. They seem wonderfully happy, considering all they had been through. The arrangements for heating, clothing, sanitation and health were very good, and the occupation of time as regards leisure seemed fairly satisfactory for an emergency measure. Better organisation for lessons and more variety in games would no doubt be possible over longer periods and in camps for boys or girls only. The one glaring defect appears to be the profiteering on catering, which should be remedied. The excuse for this would seem to be the difficulty of finding suitable accommodation in a short time, which necessitated using the easiest available.