How to look for records of... Overseas maps and plans

This guide will help you to locate historical maps, held at The National Archives, of towns, cities, regions and countries around the world. There is also some advice on how to find old plans of buildings, fortifications, harbours, and countless other installations, many in English and British colonies but others elsewhere around the globe.

For advice on finding maps and other documents specific to borders, boundaries and boundary commissions, see our guide to records of international boundaries.

For guidance on finding maps and charts of international and British waters produced by the Admiralty  Hydrographic Department, see our guide to sea charts.

High resolution copies of the maps and plans pictured in this guide are available to purchase, along with many hundreds of others, through our Image Library.

We hold maps and plans generated or collected by the various departments of state responsible for the foreign relations of England, Wales and the United Kingdom since the 16th century. These include: 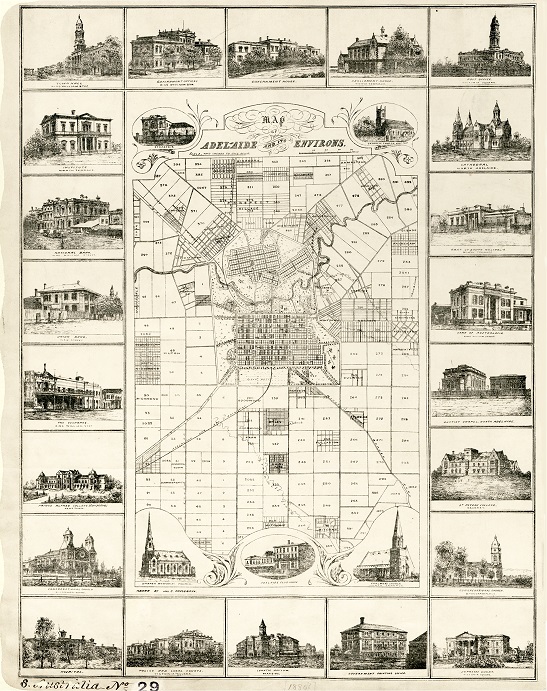 A Colonial Office map from 1880 of Adelaide and its environs, in South Australia (catalogue reference CO 700/SOUTHAUSTRALIA29)

Though maps were usually placed in the custody of departmental libraries, no section, division or unit within the departments listed above was created solely for the care of maps and they were acquired on something of an ad hoc basis.

Many maps were gathered by diplomats when abroad or by colonial governors and civil servants. Often they accompanied reports and despatches. A number were commissioned or purchased from map sellers in the United Kingdom, sometimes to assist comprehension of diplomatic and territorial relations abroad.

We don’t hold the records of the India Office and Burma Office – these are at the British Library. Many of the maps collected by the Foreign Office after 1940 have been transferred to the Royal Geographical Society.

3. How to search for and see our maps and plans 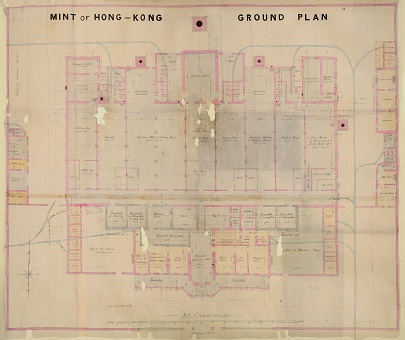 A ground plan of the Hong Kong Mint from 1864 (catalogue reference MR 1/895/2-3). This comes from a Colonial Office collection.

Very few maps and plans held here are available to view online and in most cases you will need to visit us or order copies to see them. First, however, you will need to find them among the tens of millions of records held at The National Archives. You can do this by:

There are short descriptions of many maps and plans in our online catalogue. You can search for these using keywords and dates. Each description is accompanied by a document reference and details of how you can view the map or plan.

To narrow your search, use the advanced search and target records from specific government departments and from a specific year or range of years. To target a specific department you will need to enter the appropriate department reference in the reference fields. For example:

Alternatively, try a broad search first and narrow your search results following the search by using the filter options. 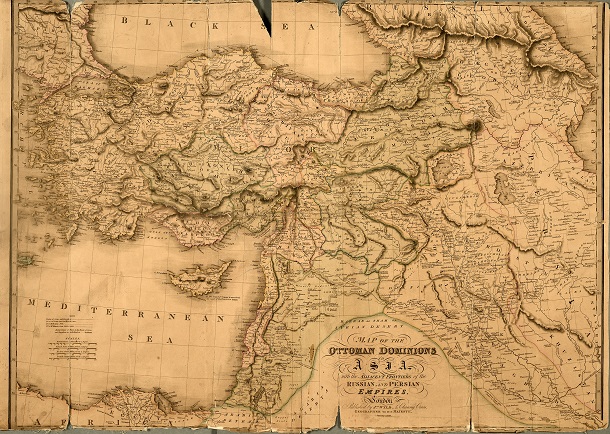 A map of the ‘Ottoman Dominions in Asia’ from 1828 (catalogue reference FO 925/2841). This map is from FO 925, one of the major collections of overseas maps held at The National Archives (see section 4).

Some maps and plans are held within larger files or volumes whose catalogue descriptions contain no mention of them. To find these you will need to visit us to search speculatively among records relating to a specific subject, country or territory. For example, given that treaties between nations can relate to territory, the correspondence and papers relating to treaties sometimes include maps used for illustrative purposes. Searching the catalogue with the name of a country or territory and the word ‘treaty’ could, therefore, lead to documents which contain maps.

In addition, there is a card index to the ‘Supplementary Map Catalogue’ in the reading rooms at The National Archives. It comprises catalogue references for maps and plans held outside of the major collections covered in section 4. It is arranged alphabetically by country, continent and map maker. 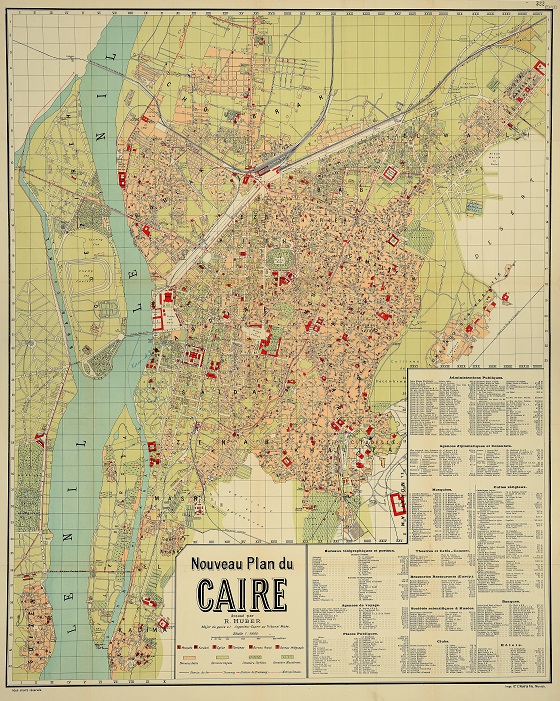 The Public Record Office, the predecessor of The National Archives, created several dozen record departments during the 20th century in which were accumulated maps, plans and drawings extracted from the records of other departments following their transfer to the archives. This was done primarily as a preservation measure, usually for maps, plans and diagrams which exceeded the size of the document of which they formed a part. In the table below, they are the series whose references begin with an ‘M’. 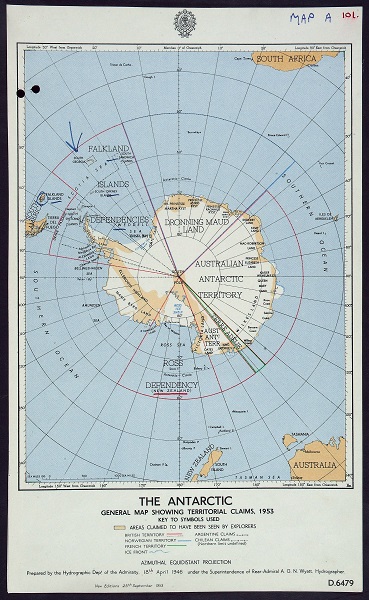 A Dominions Office map showing territorial claims on the Antarctic in 1953 (catalogue reference DO 35/6984).

In 1925 the Dominions Office was established to administer the semi-autonomous territories of the Commonwealth as well as a number of anomalous territories. This included:

For a more detailed breakdown of the territories see the administrative background of the Dominions Office.

Before 1925 and since 1907, administration of the dominions had been undertaken by the Dominions Division of the Colonial Office.

There are many record series containing maps and plans from the Dominions Office and its predecessors but the following three hold significant quantities: 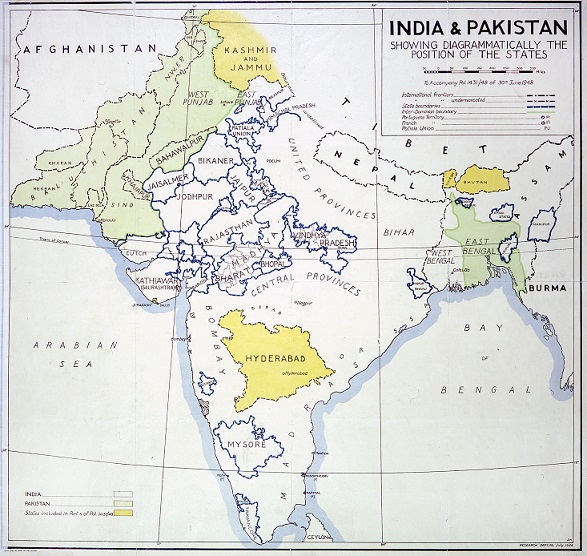 A 1948 map of India and Pakistan used by the Foreign Office (catalogue reference MFQ 1/1145). As is the case with large numbers of our maps, this map has been extracted from a Foreign Office series (in this case, FO 371) to be held with other maps and plans stored together.

Responsibility for relations with India and Pakistan passed to the Commonwealth Relations Office on their independence in 1947. The new department was formed that year by the merger of the Dominions Office and the India Office.

For maps of post-independence India, Pakistan and Burma use the advanced search in our catalogue to search by year or range of years and target your search to the following department references: 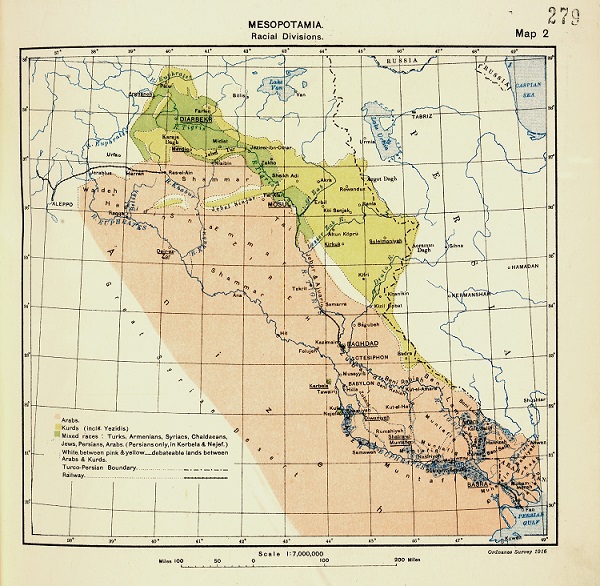 A map employed at the Paris Peace Conference in 1919, showing the ‘racial divisions’ in Mesopotamia (catalogue reference FO 608/96).

Search in FO 373 and FO 608 for maps produced during the Peace Conference following the First World War.

7.2 Plans of 16th-century towns and harbours

SP 46 contains a small collection, numbering ten or fewer, of maps and plans of the time of Elizabeth I. They are mostly plans of towns and harbours.

7.3 Maps of 17th-century Europe and America

Maps and plans collected by Sir Joseph Williamson, Keeper of the State Papers from 1661 to 1702, including maps of America and Europe and plans of forts, are in SP 9.

Foreign Office and Foreign and Commonwealth Office records from 1782