How to look for records of... International boundaries

The National Archives has one of the UK’s richest archival collections of material relating to international borders, referred to more often in the records held here as international boundaries.

This guide will help you to find maps and many other kinds of records of international borders within our vast holdings, providing historical context for borders around the globe, some dating back centuries, others from recent decades.

Many international boundaries remain in dispute today. The resolution of such disputes often depends on records of earlier definitions, demarcations and surveys. As time has passed, archives in many countries have been destroyed by war, natural disasters or major changes in government. As a result, documents at The National Archives often constitute the sole surviving record of earlier boundaries and boundary surveys.

2. What kinds of records do we hold?

The National Archives holds the records of UK central government which have been selected for permanent preservation. 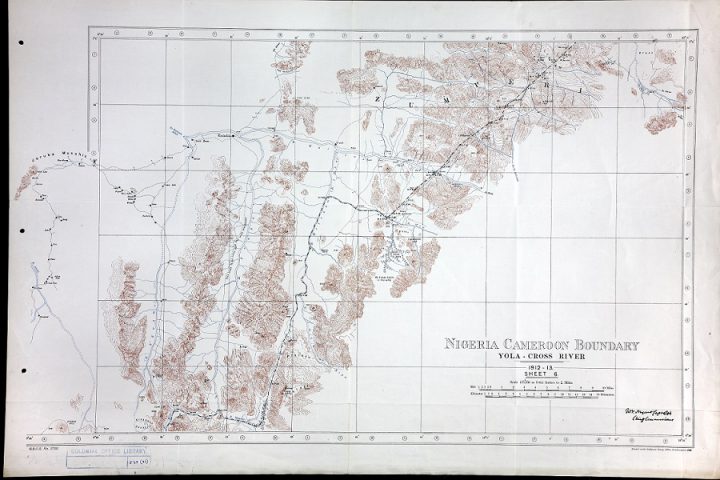 One of a number of Colonial Office maps from 1912-1913 showing the Nigeria Cameroon boundary at the Yola Cross River (catalogue reference CO 1054/175). The Colonial Office is among the past government departments that collected large numbers of records of international boundaries, since transferred to The National Archives. You can order a high-resolution copy of this image from our Image Library.

2.1 Where our records of boundaries come from

The practice of accurately surveying and mapping international boundaries did not become the norm until the 19th century. Boundaries between British and neighbouring colonies of other European nations were often defined by treaty and then mapped out by an international boundary commission. Even when Britain had no direct interest in the territories affected there was frequently a British commissioner on international boundary commissions, such was the high regard in which British surveying expertise was held internationally. The records generated by these surveys were usually deposited in the archives of the countries concerned but a certified copy was often brought back to London by the British commissioner and invariably deposited among the Foreign Office archives.

It is among the records of the Foreign Office and the other government departments responsible for handling foreign affairs and British interests overseas that you are most likely to find documents relating to international boundaries at The National Archives. The most significant among these past and present departments are:

Other sets of records held here that contain information about – and maps depicting – boundaries are the private papers of a relatively small number of high-ranking civil servants, politicians and military officers who were involved in boundary making (see section 4 for examples).

The National Archives has an especially rich collection of maps but records of boundaries extend well beyond just maps. Document types include treaties, official reports by boundary commissioners, diplomatic despatches, survey data, memoranda, cahiers de specification (containing the technical specifications needed for the marking out and drawing up of boundaries) and photographs.

The chances of records existing is increased where there has been a boundary dispute at some point in the past.

3. How to search for records

The vast majority of these records are not available to view online. To view them you will either need to visit us to view the originals in person or order copies by first finding document references.

A note on terminology: the word ‘boundary’ in this context occurs more frequently in our catalogue than ‘border’. We therefore use ‘boundary’ as the main term in this guide but consider ‘border’ to be a synonymous term.

Using the same, or similar, keyword search terms suggested in 3.1, search across The National Archives departments most likely to hold maps and other records of international borders, as listed in section 2.1. It may be worth starting with the International Boundary Archives of the Ordnance Survey International Library but other key series are among the records of the Foreign Office, Colonial Office and, for records before 1782, State Papers record series. Some of the most significant series in these departments are listed in the table below. They contain various types of records, including:

For more in-depth advice on these record types and how to locate them see our guides to Foreign Office records, Colonial Office records and State Papers Foreign.

Each series in the table below covers material relating to numerous countries and regions. Click on the series reference and search the series using the kinds of keywords listed in section 3.1:

As well as records of the State Paper Office, Foreign Office and Colonial Office, the minutes, memoranda and conference papers of the Cabinet and its numerous committees contain many maps of international boundaries. Such maps were usually printed at a small scale to illustrate discussion papers or to provide background information. For more advice on these records and how to find them see our guide to the records of the Cabinet and its committees.

A Colonial Office map of the division line between North and South Carolina in 1730 (catalogue reference CO 700/CAROLINA8). You can order a high-resolution copy of this image from our Image Library.

3.3 Search in country- or region-specific series

Use the tables in section 4 to find a series specific to the country, region, boundary or border you are interested in.

The following record series all contain maps or other records of international boundaries in the regions indicated.

Although the Colonial Office was responsible for administering the colonies of the British Empire, it was the East India Company and subsequently the India Office that administered the Indian sub-continent and a number of other territories east of Suez. These records are held at the British Library.

Click on the record series references below and search the series using keywords (see section 3.1 for some suggested keywords).

Africa and the Middle East

Cross section of a Foreign Office map showing the Armenian-Turkish border in 1908 (catalogue reference FO 195/2283). You can order a high-resolution copy of this image from our Image Library.

5. Maps, documents and other resources elsewhere

The IBRU Centre for Borders Research at the Department of Geography of Durham University is one of the world’s leading research centres on international boundary making and dispute resolution.

A number of other institutions have significant holdings of maps relevant to studies of international boundaries. Particularly of note are:

Foreign Office and Foreign and Commonwealth Office records from 1782