Use this guide for advice on how to find National Archives records of civil trials held at assize courts. It covers trials in England since 1656 and in Wales since 1843, up until 1971 when assize courts were abolished and replaced by Crown courts.

If you know which county a trial was held in and when the trial took place, use the tables and advice in this guide to determine which National Archives record series to look within for records of the trial.

2. What were assize courts?

Assize courts were based in the main county towns in England and Wales but cases were only heard at the courts twice yearly, and in the 20th century three or four times yearly, when judges from the higher courts in London visited and presided over cases.

Often known simply as ‘the assizes’, the courts heard both civil and criminal cases. Civil cases could include disputes over:

From the early 20th century the assizes also handled divorce cases, which had previously been the sole preserve of the central courts in London.

Until the 20th century there were typically just two sittings a year for each assize court, defined as Summer and Lent. Usually the Lent sessions would take place in March or April and the Summer sessions in July or August but there was some flexibility. In the late 19th and 20th century the number of sittings increased to three or four a year in the following order: Winter, Spring, Summer and Autumn.

England and Wales were divided into judicial circuits, each circuit making up the areas covered by a set of visiting judges. Up until 1876 there were six circuits whose composition changed from time to time. These circuits were:

In 1876 a seventh circuit, the North Eastern, was added.

3. Types of records and what they contain 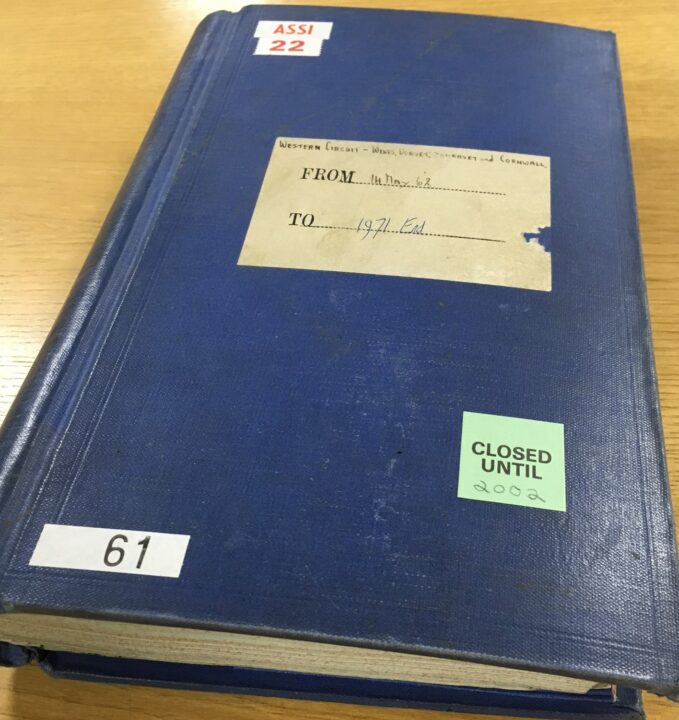 Assize courts produced over twenty different types of records. They include:

Minute books are the primary records for a trial. The assize clerks recorded brief details of a trial in minute books, including names of parties, type of case and judgment order. They also give any judgment orders given on appeal.

These records set out the details of the claim made by the plaintiff and the response or defence from the defendant. They can also include the judgment order.

Judgment orders in cases – in other words what the outcome of the case was and what the consequences were for the parties involved – are found either in minute books or on a part of the record known as posteas. Posteas were forwarded to the central courts in London and give brief details of the case as well as its outcome. Posteas do not always survive.

A clip from a minute book showing a judgment order for a trial in 1970 (catalogue reference: ASSI 22/61).

Cause in the context of a civil trial refers to the ’cause of action’, in other words the legal basis on which a claimant is suing. A cause of action might be, for example, breach of contract, or fraud.

Cause books and postea books generally record the names of the parties to the cause (that is, the claimants, also referred to as plaintiffs), the names of their legal representatives, the nature of the cause, the verdict, and the amounts of any damages and costs awarded.

This was correspondence of the assize clerks, mostly administrative and concerned with the running of the courts.

These records provide details of court fees, meaning the cost of bringing a case to trial, as well as other costs. The person or institution bringing the case to trial pays the fees but these costs, known as Bills of Costs, or a proportion of them, usually end up being paid by the losing side, dependent on whatever the judge orders. that lawyers submit after a case and are assessed by the court.

4. How to search for records

Before you begin you will need to have at least a rough idea of when the trial took place (a range of around ten years but ideally an exact year) and the county or at least the circuit it took place in for a realistic chance of finding any records.

4.1 Searching in the assize court records

The tables in the following sections of this guide provide National Archives record series references for the different types of records that exist for civil trials. There is usually one series for minute books and several others covering all the other record types, whether pleadings, judgment orders, correspondence, financial records or any others.

There are several ways that you can conduct a search:

For more information on whether to browse or search, see our Discovery help pages.

4.2 Searching in the records of other courts (for details of assize court cases)

Although only of value if there are gaps in the surviving assize records, it may prove necessary to try searching within the records of other courts to which details of assize court trials were forwarded or returned (in some cases it may be the only surviving record). Posteas were forwarded to the central courts in London and contain brief details of the case as well as its outcome.

Use the advanced search to search by year, using ‘postea’ as your keyword and one or more of the department codes below, to search in the following National Archives departments:

From 1876 all civil cases heard by the assize judges were held at district registries of the High Court. For pleadings in assize cases from 1876 it is therefore also worth searching in J 54, which covers pleadings in several types of court including district registries of the High Court, by initial letter of the plaintiff’s surname in the advanced catalogue search. For more detail see the advice on pleadings in our guide to Chancery cases in the Supreme Court after 1875.

Click on the series references in the table below to search for records within each respective series using the instructions in section 4.

Click on the series references in the table below to search for records within each respective series using the instructions in section 4.