How to look for records of... Civil court cases: an overview

This is a guide to searching for records at the National Archives of legal disputes, settled in court, between two parties over matters such as land, property rights, debt, inheritance and trusts. Such cases are known as civil cases, as opposed to criminal cases, and the legal process is known as civil litigation.

Over the centuries many civil courts were created to deal with different branches of the law. Some were relatively short lived and no longer exist, some were absorbed into other courts, while others still continue. Each court created its own set of records and they vary considerably in how complete and how informative, or easy to understand, they are. This guide covers the courts whose records are held at the National Archives. Records of some courts, such as County Courts or Magistrate’s courts, do not come to the National Archives but may be in city or county archives.

For guidance on records relating to the following subjects, click on the links below:

Most of the court records we hold are not online and to see them you will need to consult them at our building in Kew or pay for copies to be made and sent to you.

Records are arranged by the court that created them, then by the type of record, such as  pleadings or affidavits, and by date.

There are no ‘case files’ containing all the information about a single case. For any case, or action, there may be a number of different types of document, each of which will have to be searched for separately. The documents themselves may be in different formats, from handwritten register books, listing a number of cases, to printed forms or large sheets of parchment, each representing one aspect of a particular case.

How to search for records

Usually you will need to know when and where a trial took place to have any hope of finding records.

Step 1: Establish which court heard the case and when.

If you know when the trial took place but don’t know which court they were heard in, you may find the missing details in local newspaper reports. Newspapers reported on some criminal cases and the reports are often more informative than the court records themselves. Consult the British Library Newspaper Library or the appropriate local county record office.

Step 2: Establish where the records for the court are held

Once you know the court, use the following sections of this guide to locate advice on where to find records for that type of court. We have listed the different courts by period, each with brief details of where to find the respective records or links to one of our guides.

Use our guides for search advice on each of the courts whose records we hold. Searches at The National Archives usually begin in our online catalogue.  Catalogue descriptions usually indicate the type of document and the date but not the names of litigants or details of the case. A successful catalogue search will unearth short descriptions of the court records and a document reference for each – you will need the document reference to see the record itself or to request copies.

For more guidance on searching or browsing our catalogue, visit our Discovery help pages.

Civil courts and their records since 1972

Records of County Courts are not held at the National Archives. Search for County Court records:

See our guide to Courts of law records held in other archives for further information and advice.

Family Courts handle cases related to adoption, parental disputes over the upbringing of children and other disputes (see the Judiciary.uk website for more information).

Records of Family Courts are not held at The National Archives. Though very little is kept, search for Family Court records:

The High Court is divided into Chancery, Family and King’s/Queen’s Bench divisions. Each of the divisions has some specific responsibilities but there is also some overlap.

Chancery Division’s specific responsibilities include the administration of:

King’s/Queen’s Bench Division hears both criminal and civil cases. Examples of the sorts of civil cases heard include:

The Court of Appeal hears civil cases referred from:

The High Court of Admiralty was a specialist court established around 1450 to deal with piracy but which later considered civil cases to do with captured ships, known as ‘prize jurisdiction’, commercial matters and disputes over wages on ships at sea, known as ‘instance jurisdiction’. In 1875 the civil law business of the court joined the other civil law courts in the creation of the Probate, Divorce and Admiralty Division of the High Court of Justice.

The Find Case Law service provides public access to recent judgments from the England and Wales High Court, the Court of Appeal, the Supreme Court and tribunal decisions from the Upper Tribunals. The service will be expanded to include more courts and tribunals and a greater range of judgments will be added. For more information see the website.

In 1875 the central courts in London were amalgamated into the Supreme Court of Judicature, consisting of a High Court and a Court of Appeal. The lower courts hierarchy, which had been in place since the medieval period continued up until 1971. From bottom to top, the civil court hierarchy was as follows:

Petty sessions were at the base of the pyramid, where minor civil disputes were dealt with. The records are held in local archives. Use our Find an archive tool to search for the location and contact details of local archive offices or search our catalogue using the phrase “petty sessions” plus the name of a county, city or town, ensuring you select the ‘Other archives’ catalogue results filter.

Assize courts also heard civil cases. They sat between two and four times a year and were presided over by professional judges. See our guide to the civil assizes for advice on finding records.

The Court of Appeal was also established in 1875. Most records relating to appeal cases give very few details about the original case and only briefly note the decision on appeal, without giving reasons. See our guide to Civil appeal cases after 1875.

Until the late 19th century there was no clear division of jurisdiction between the various courts and similar types of case could have been heard in any of a number of courts. Our guides give more information on finding records of the various courts but if you do not know which court heard a case, it may be a lengthy search.

Court of Common Pleas was concerned with civil litigation at common law between subjects, principally about real property and debt. Records are in 73 series within the department code CP.

This hierarchical view of CP shows the division into types of proceedings. Records relating to pleas are further divided into 27 series, according to type of record and in date order. 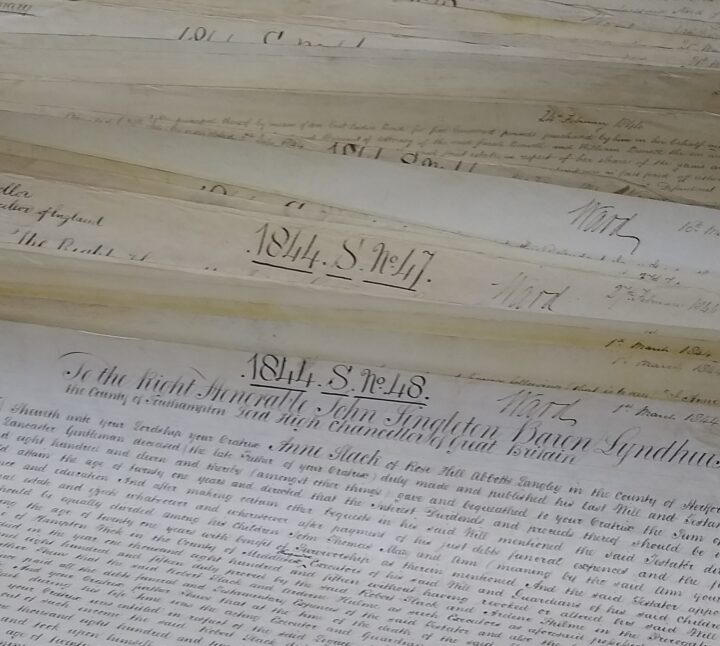 Legal documents may be in a variety of formats. Although these pleadings are from a Chancery case in 1844 (reference: C 14/295/s48) they are recorded on large sheets of parchment and kept in rolls, as they had been for many hundreds of years.

The Court of Chancery heard disputes over land and other property, family heritance and wills, debts marriage settlements, trade and bankruptcy and many more. We have research guide for cases before 1558 and after 1558.

Court of Exchequer dealt mainly with disputes over titles of land, manorial rights, tithes, mineral rights, debts and wills and many more.

Court of King’s Bench to 1702 and from 1702 for cases of breach of contract, debt, personal injury, medical negligence, libel, slander and wrongful arrest among others.

Court of Wards and Liveries 1540-1645 dealt with land inheritance disputes.

Court of Requests, 1485-1642, was initially known as the Court of Poor Men’s Causes. It dealt primarily with small scale civil cases and was established to provide access to justice for poor men and women.

Civil courts and their records in the medieval period, 1194-1484

Court of Common Pleas records are in 73 series within the department code CP. This hierarchical view of CP shows division into types of proceedings. Records relating to pleas are in 27 series according to type of record and in date order.

General Eyres, 1194-1348, – groups of judges from the central courts at Westminster travelled to all the counties of England, apart from Chester and Durham, at roughly seven year intervals. The term eyre may refer to the court or to the circuit. Both civil and criminal cases were heard.

Records in other organisations and other sources

See our guide to Courts of law records held in other archives for information on court records held at local or county archives.Newspaper libraries such as the British Library collection may help in finding which court heard a case and in reporting the proceedings and result. Records relating to cases heard by the House of Lords on appeal are held by the Parliamentary Archives.

The British Library and the Law Society Library hold indexes to Court of Appeal transcripts.