Use this guide for advice on how to find records of criminal trials held at the assize courts in England, from 1559 to 1971, and Wales, from 1831 to 1971. For information on Welsh trials from 1543–1830, consult the National Library of Wales website. Their Crime and Punishment database contains records of criminal trials as well as other information relating to criminals, punishment and crime in Wales.

Assize courts tended to deal with the more serious criminal offences, although this was not always the case. Cases heard by assize courts typically included homicide, theft, rape and assault among other crimes.

Up to 1733 most assize court records are in Latin.

2. What were assize courts?

Assize courts were the foundation, along with the courts of quarter sessions, of the criminal court system in England and Wales up until 1971. Based in the main county towns in England and Wales, cases were only heard at the courts twice yearly, when judges from the higher courts in London visited and presided over cases.

Often known simply as ‘the assizes’, the courts originally dealt predominantly with property disputes, but their remit soon widened to include criminal cases as well as cases passed on from the central Westminster courts. By about the mid-13th century the courts were dealing with cases of:

Assize courts also heard civil cases, the records of which are covered in our civil assizes guide.

England and Wales were divided into judicial circuits, each circuit making up the areas covered by the visiting judges. Up until 1876 there were six circuits. They were: 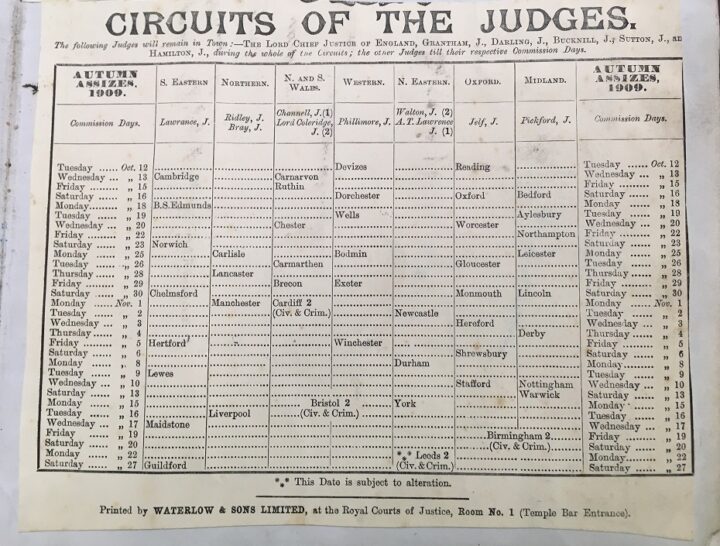 The judges’ circuits with scheduled dates for the Autumn assizes in 1909. As shown in the image, there were seven circuits at this time (catalogue reference ASSI 2/49).

3. Record types and the information they contain

Not all assize records have survived as the assize clerks sometimes destroyed them when they ran out of space. Earlier records are less likely to have been kept than later ones.

3.1 Crown and gaol books (aka minute books or agenda books)

The best place to begin a search in the assize records is in the Crown and gaol books, also known as minute books or agenda books. These usually list:

There may be a separate series of minute books for offences such as the failure of local communities to keep local roads and bridges in a good state of repair. These kinds of ‘public office’ offences were considered criminal offences.

These are the formal statements of the charge against the accused, usually annotated with plea, verdict and sentence.

Indictments were filed in large unwieldy bundles together with other related records, depending on the period and the circuit. Bundled in with indictment records you may also find details of jury panels, coroners’ inquisitions, examinations and depositions, gaol calendars, trial minutes, commissions, presentments of non-criminal offences and recognizances (which give names, parishes of residence and occupation and are usually far more accurate than those given on the indictments themselves).

The details of the defendant should be treated with caution, especially before the late 19th century. The defendant’s occupation was normally given as ‘labourer’ and the parish of residence is invariably the parish in which the alleged offence took place. The alleged offence is defined by lengthy and formal phrases and some, especially in cases of serious misdemeanour, such as perjury or libel, are several membranes long.

Until 1916, assize indictments were either handwritten or partly printed and partly written on parchment. After 1916 all indictments were prepared using standard, usually pre-printed, forms. These give the jurisdiction and venue, the name of the defendant, the plea, a summary statement of the charge or charges and particulars of the charges.

Depositions, sometimes known as sessions papers, consist of pre-trial witness statements. However, the survival rate for these records is relatively poor and those that do survive have been heavily weeded. Only depositions in capital cases, usually murder and riot, tend to survive.

Deposition files, especially those from the mid-20th century or later, may also contain items used as trial exhibits, including:

The Old Bailey Online website provides detailed proceedings (although not complete transcripts of what was said) for trials at the London central criminal court.

Other assize records can include:

4. How to search for records

As most assize court records remain available only in their original paper or parchment form (copies are not available online), to search for them and see them you will need to visit us at our building in Kew. Alternatively, if you can establish the record series and document references within the series, you can use our record copying service to have copies sent to you for a charge. Either way, you will need to follow these steps to locate records:

Step 1: Establish where and when the trial took place

If you do not know the date or at least the year of a trial and the county in which the trial took place, you may find your search hits a dead end very quickly. Consult our criminal court cases overview guide for advice on using newspapers, criminal registers and calendars to try to establish these facts.

Step 2: Decide which type of record to look for

Usually, the best place to begin a search in the assize records is the crown and gaol books. To decide which kind of record will be most useful for your research see the information on record types in section 3.

All assize court records at The National Archives are identified by the department code ASSI. You will also need a series number (each circuit has its own set of series) to narrow your search. To find the right record series refer to the keys in the appendices of this guide. For English counties use Appendix 1; for Welsh counties use Appendix 2.

By searching or browsing the right series you will hopefully find a piece number that covers the records of the trial in question. Once you have the piece number you can view the original records in person at The National Archives in Kew or pay for copies to be sent to you.

There are some other scattered records outside of the ASSI department at The National Archives which relate to criminal trials at assize courts. There are also records and accounts of trials elsewhere, in other archives and libraries.

5.1 Transcripts held by government departments and other courts

There are court transcripts for some trials among Court of Appeal, Director of Public Prosecutions or Treasury Solicitor and Home Office records. There are sometimes additional notes which can provide insight into a trial. The following record series are the best place to start if you are looking for court transcripts:

Payments and expenses incurred by sheriffs in the punishment of prisoners were often recorded. These records can include lists of prisoners tried or transported, accounts for maintenance in prison or expenses for carrying out an execution. They provide a useful alternative for the many missing assize records from this period.

You cannot search these records by keyword. Instead, click on the links below to browse through the records by year ranges:

5.3 Judicial reviews at the Court of King’s Bench

The Court of King’s Bench would sometimes direct an assize court to send the records of a trial for review, a process known as certiorari. There are copies of indictments within the records of writs of certiorari in KB 9.

The Office of Director of Public Prosecutions (DPP) was created in 1879 with powers to institute and conduct criminal proceedings in any of the senior criminal courts – assizes, Crown Court, King’s/Queen’s Bench or Central Criminal Court.

Before 1879, the Home Office gave advice on prosecutions to police forces and magistrates’ clerks and gave directions to the Treasury Solicitor (TS) to institute proceedings in important cases, notably those involving political crimes.

Director of Public Prosecutions and Treasury Solicitor files on cases can be searched for by surname of the defendant.

Treasury Solicitor’s files on criminal cases can be found in various series, including case papers in TS 11, TS 18 and TS 22; and transcripts of proceedings in TS 36.

Appendix 1: Key to records of criminal cases in the English assizes 1559-1971

Click on the links in the table to search or browse through the respective series in our catalogue. See section 4 for detailed advice on how to search. For advice on whether to browse or search, see our Discovery help pages.

Bristol assize records prior to 1832 are held by Bristol Record Office.

* You can search by name and the term ‘assize’ for the calendars of Essex Assizes indictments in ASSI 35 (1558-1714) on the Essex Record Office catalogue.

** For Yorkshire there are two series of Crown & Gaol Books for the earlier period so you will need to check both.

Click on the links in the table to search or browse through the respective series in our catalogue. See section 4 for detailed advice on how to search. For advice on whether to browse or search, see our Discovery help pages.

Appendix 3: Latin abbreviations still used in the records after 1733

Until 1733 (with the exception of the period of the interregnum), records were written in Latin and in distinctive legal scripts. The annotations on indictments are often in Latin abbreviations which remained in use even after 1733.

J S Cockburn’s publications are invaluable guides to assize records. His history of assizes is particularly valuable, with sage advice on the pitfalls of taking the records at face value.