What do these documents reveal about attitudes to crime and punishment? 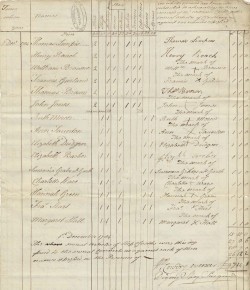 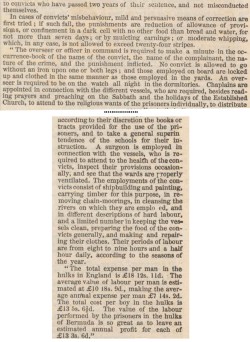 Life on board ii 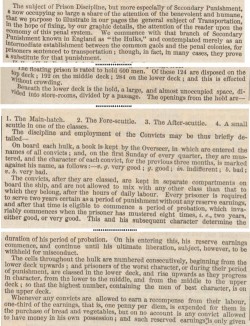 Life on board i 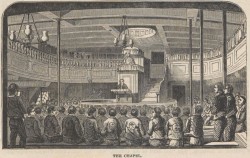 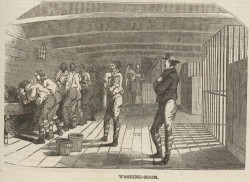 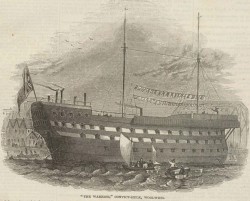 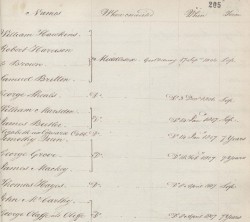 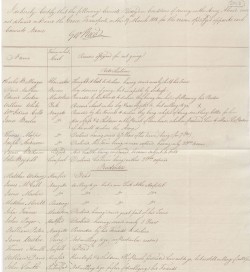 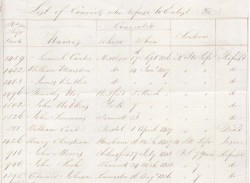 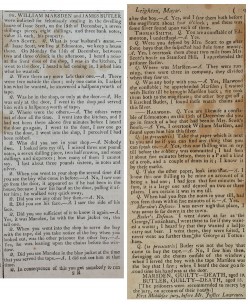 The aim of this lesson is to get students to engage with original documents relating to prison hulks. Students will look at various records relating to the 15-year old James Butler and more generally in relation to the physical conditions on board. By interpreting these documents they can discover how the criminal justice system actually worked in the late 18th and early 19th centuries, especially with respect to ‘mercy’. They will also form an appreciation of the conditions on board prison hulks and dispel the myth that women were not detained on hulks.

As part of the task, there are some further questions to prompt the students to consider the nature of the sources themselves and respond to a final question asking them to explain why life was so harsh onboard the hulks.

How to introduce the task

This can be done in a number of ways depending on size of group, ability of pupils, and teacher preference, so here is one suggestion:

Break the class into groups and get them to look at different documents from the online collection. One group could look at the records relating specifically to James Butler, whilst the other group could review the extracts from the Illustrated London News concerning conditions on board the hulks and the other sources.

The students then feedback on their documents and/or annotate them at a white board. It is important that the group reviewing the records relating to James Butler consider the documents in chronological order, starting with the Old Bailey transcripts and progressing through time to the transport registers. By doing so, the students should gain an appreciation of the impact of pardoning and learn that, more often than not, the eventual outcome often differed from the initial sentence.

To support them when looking at the documents, some general guidance questions on how to evaluate documents are included here. Teachers may wish to print these out, and discuss them with the students before they look at the documents.

General guidance questions for use with documents

We hope that by presenting teachers with a collection of documents it offers them the flexibility to develop their own approaches and questions and differentiate the task as they see fit. Teachers may, for example, prefer to use the material to ask pupils to explore the history of children or women detained on prison hulks.

Others may wish to extend their work on prison hulks or create a different enquiry question on crime and punishment of their own using the links provided on this web page which provide access to yet more documents. All documents here and elsewhere on the site, are provided with transcripts and can be downloaded.

Use these resources in the classroom

Download the documents and transcripts from this collection (ZIP, 2 MB)

Order the original documents from Discovery, our catalogue

1.  Using the first five documents, write your own case study on James Butler. Be sure to comment on the following:

2. Using the rest of the documents in the collection what can you find about conditions for hulk prisoners?

3. What do you think the whole group of documents reveals about the type of criminal activity and the causes of crime in this period?

4. Using examples, explain how these documents can provide evidence of government attitudes/responses towards punishment and prisoners.

Britain had been sending criminals across the Atlantic since the early 17th century, to Virginia and Maryland and to the West Indies to serve as cheap labour on plantations. However, once war broke out with the American colonies in 1775, the route to America was closed off. Transportation to Australia, 16,000 miles away, would not become practical for another ten years, when eventually, 136,000 male and 25,000 female prisoners were transported in the period 1788 to 1853.

English prisons were overflowing with prisoners awaiting transportation but with nowhere to go. This was largely the result of the Bloody Code which listed over 200 crimes punishable by death. Judges were reluctant to sentence to death for the minor crimes listed in the code. Therefore, many people were pardoned and ended up in gaols awaiting transportation. People were very poor, work and food were scarce and most children didn’t receive an education. Unsurprisingly, theft was one of those offences punishable by death and was by far, the most common crime.

The government was under pressure to come up with a practical solution as they could no longer send prisoners to America. This was increased by social commentators at the time such as John Howard, High Sheriff of Bedfordshire and Patrick Colquhoun, Founder of the Thames River Police, who pressed for reform of the prison system.

In 1776 a new Act of Parliament allowed the use of floating prisons or hulks for two years as a temporary solution to the problem of overcrowded gaols.

The Middlesex Justices were responsible for commissioning the first hulks and unsurprisingly, the contract to oversee prisoners on these prison ships was awarded to a transportation contractor, Duncan Campbell. The first civilian prison hulk, was an ex-convict transport ship of Campbell’s called the Justitia and soon after, a further 50 or more were brought into service until 1850. These ships served as ‘temporary’ prisons for nearly 100 years.

There can be no doubt that life on the prison hulks was tough. Inmates were chained in irons, rising daily at 5am, then doing ten hours hard labour in the summer, seven in the winter, and finishing work at 7pm. Despite the fact the fact that the hulks were supposed to be a solution to overcrowding for prisons on land, these ships were over-crowded. Prisoners slept, ate and passed time in the same below deck space. Sleeping conditions were cramped and provided ideal conditions for the spread of disease, including typhus and tuberculosis. Clothing for the prisoners was basic but sufficient and the diet adequate, although at times concerns were raised about the lack of fruit, vegetables and bread and the freshness of the meat. Death rates were high, especially in the early years when roughly one in four inmates died on the hulks. As with transportation, this dropped significantly by the turn of the 19th century to about one in ten.

The psychological conditions however, were worse than the physical ones. The reputation of the hulks was so bad that many preferred to be hanged than go on board. Convicts were often admitted to the ships suffering from a complete depression of spirits, made no better by being put to hard physical labour in full view of the public. Politicians and commentators like Colquhoun were also concerned about the corruption of morals and a system which kept hardened criminals, first offenders and boys together.

Until 1823 boys were regularly held alongside adults in the general hulk population. Around 1824 the adult male population of the hulk Bellerophon, moored at Sheerness, were removed and the hulk was set aside as the first hulk used exclusively to hold up to 350 boys. Within two years, these boys would be transferred to the specially fitted out but terribly overcrowded Euryalus until the mid 1840s. Children as young as eight appear on the prison hulks.

Although women were not generally kept on prison hulks, some were. In 1823 inmates of Millbank prison were moved by an Act of Parliament to prison hulks at Woolwich following an epidemic. Amongst these inmates were 167 women who were detained on the prison hulks Narcissus and Heroine. Disease followed the prisoners to the hulks and most were pardoned and released by 1824. The Dunkirk was the only other hulk to contain women convicts.

However, the actual fate of men, women and boys imprisoned on hulks rarely matched their sentence given at their trial. Often those sentenced to death escaped the hangman’s noose as a result of accepting a pardon. Technically, pardons could be offered but not enforced and while it was extremely rare, there is evidence of prisoners refusing pardons, including Butler, who was one of 50 prisoners on various hulks offered a pardon on condition of serving in the army abroad. At the time of Butler’s detention on the Captivity, Britain had been at war with either France, or previously with the American colonies, for over 20 years and this no doubt had a bearing on Butler’s refusal. Nevertheless, it was a risky thing to do as refusing a royal pardon was considered an insult to the King.

Thus by looking at these Old Bailey trial transcripts, hulk registers and quarterly returns, criminal entry books, transport registers and newspaper extracts students can discover what life was like on prison hulks through the story on one boy.

Why were Victorian Prisons so tough?