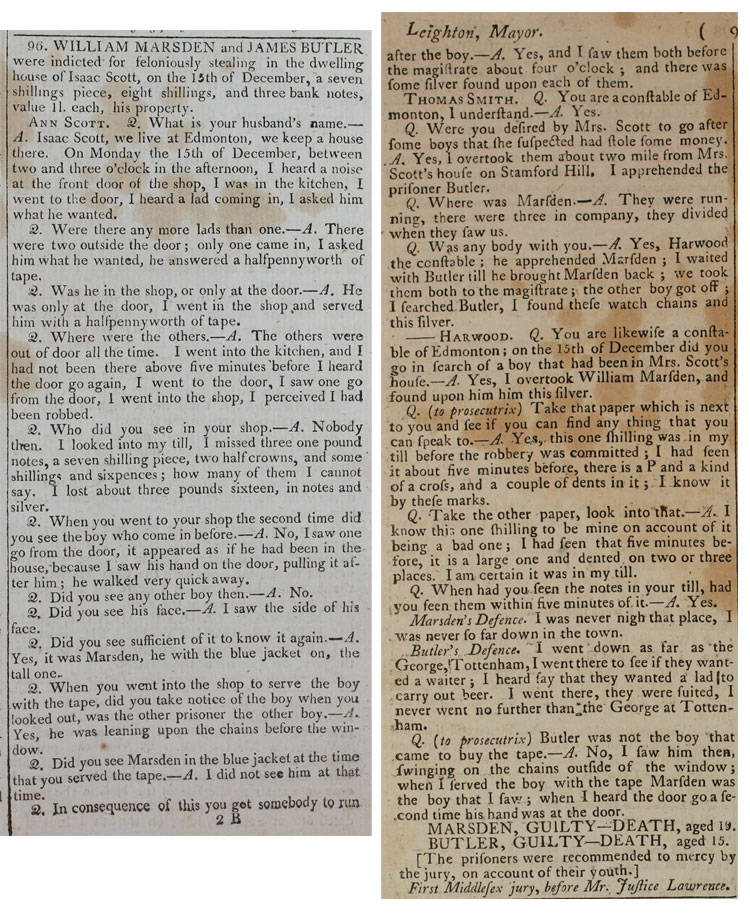 96. WILLIAM MARSDEN and JAMES BUTLER were indicted for feloniously stealing in the dwelling house of Isaac Scott, on the 15th of December, a seven shillings piece, eight shillings, and three bank notes, value 1 l. each, his property.

ANN SCOTT. Q. What is your husband’s name. – A. Isaac Scott, we live at Edmonton , we keep a house there. On Monday the 15th of December, between two and three o’clock in the afternoon, I heard a noise at the front door of the shop, I was in the kitchen, I went to the door, I heard a lad coming in, I asked him what he wanted.

Q. Were there any more lads than one – A. There were two outside the door; only one came in, I asked him what he wanted, he answered a halfpennyworth of tape.

Q. Where were the others. – A. The others were out of door all the time. I went into the kitchen, and I had not been there above five minutes before I heard the door go again, I went to the door, I saw one go from the door, I went into the shop, I perceived I had been robbed.

Q. Who did you see in your shop. – A. Nobody then. I looked into my till, I missed three one pound notes, a seven shilling piece, two half crowns, and some shillings and sixpences; how many of them I cannot say. I lost about three pounds sixteen, in notes and silver.

Q. When you went to your shop the second time did you see the boy who come in before. – A. No, I saw one go from the door, it appeared as if he had been in the house, because I saw his hand on the door, pulling it after him; he walked very quick away.

Q. Did you see sufficient of it to know it again. – A. Yes, it was Marsden, he with the blue jacket on, the tall one.

Q. When you went into the shop to serve the boy with the tape, did you take notice of the boy when you looked out, was the other prisoner the other boy. – A. Yes, he was leaning upon the chains before the window.

Q. Did you see Marsden in the blue jacket at the time that you served the tape. – A. I did not see him at that time.

Q. In consequence of this you got somebody to run after the boy. – A. Yes, and I saw them both before the magistrate about four o’clock; and there was some silver found upon each of them.

THOMAS SMITH. Q. You are a constable of Edmonton, I understand. – A. Yes.

Q. Were you desired by Mrs. Scott to go after some boys that she suspected had stole some money. A. Yes, I overtook them about two mile from Mrs. Scott’s house on Stamford Hill. I apprehended the prisoner Butler.

Q. Where was Marsden. – A. They were running, there were three in company, they divided when they saw us.

Q. Was anybody with you. – A. Yes, Harwood the constable; he apprehended Marsden; I waited with Butler till he brought Marsden back; we took them both to the magistrate; the other boy got off; I searched Butler, I found these watch chains and this silver.

– HARWOOD. Q. You are likewise a constable of Edmonton; on the 15th of December did you go in search of a boy that had been in Mrs. Scott’s house. – A. Yes, I overtook William Marsden , and found upon him this silver.

Q. (to prosecutrix) Take that paper which is next to you and see if you can find any thing that you can speak to. – A. Yes, this one shilling was in my till before the robbery was committed; I had seen it about five minutes before, there is a P and a kind of a cross, and a couple of dents in it; I know it by these marks.

Q. Take the other paper, look into that. – A. I know this one shilling to be mine on account of it being a bad one; I had seen that five minutes before, it is a large one and dented on two or three places. I am certain it was in my till.

Q. When had you seen the notes in your till, had you seen them within five minutes of it. – A. Yes.
Marsden’s Defence. I was never nigh that place, I was never so far down in the town.
Butler’s Defence. I went down as far as the George Tottenham , I went there to see if they wanted a waiter; I heard say that they wanted a lad to carry out beer. I went there, they were suited, I never went no further than the George at Tottenham.

Q. (to prosecutrix) Butler was not the boy that came to buy the tape. – A. No, I saw him then, swinging on the chains outside of the window; when I served the boy with the tape Marsden was the boy that I saw; when I heard the door go a second time his hand was at the door.

[The prisoners were recommended to mercy by the jury, on account of their youth]

1. At this time most prosecutions were effectively ‘private prosecutions’ brought by the victim and generally speaking defendants had no legal representation. The impact of that is perhaps most reflected in the extremely pithy nature of Marsden’s and Butler’s so called ‘defence’.
2. There were over 200 capital offences at the time, i.e. crimes that attracted the death penalty, including ‘theft from a dwelling place’. We can see from the transcript that the Old Bailey judge, Mr Justice Lawrence, sentenced both to death but then showed mercy, ‘on account of their youth’ – youthfulness was a common factor in showing leniency. At this stage it isn’t clear the extent of that mercy.