How to look for records of... Merchant Navy officers

This guide will help you find and interpret records of Merchant Navy officers’ from 1845 to 1965. For service before 1845, when registers of Merchant Navy officers were not kept, you must look for records kept for other purposes (such as crew lists, agreements and log books) but which may include incidental mention of officers. You might also find information about an officer by searching the records of ordinary merchant seamen.

You may also like to read our guide on Merchant seamen’s medals and honours.

What does it help to know before I start?

In the merchant navy the term ‘officer’ can refer to a master, mate, engineer, fishing boat skipper, second hand or cook.

It may help to know the number of a ship as ships are sometimes referred to in the records by their number rather then their name. You can search for ships’ official numbers through the Crew List Index Project.

Dates of departure and arrival for voyages

Find out dates of departure and arrival by consulting:

Search the alphabetical register (BT 115) on Findmypast (£) which was compiled from crew lists.
The registers follow a similar format to Registers of Seamen Tickets in BT 113.

Search for the National Maritime Museum’s records of master and mate certificates (1850-1927) on Ancestry.co.uk (£).

Search The Gazette for lists of masters and mates who passed officer examinations.

To access the records in this section you will either need to visit us or, where you can identify a specific document reference, order a copy (£).

Search Discovery, our catalogue, by name of person or ship in T 335 to find what the award was, the person’s rank at the time, and the ship they were serving on.

Narrow your search by using double quotation marks to find a ship’s or person’s full name, such as “Sydney Star” or “John Williams”.

Registers of merchant seamen after 1913 (for records of voyages)

Consult our guide to records of merchant seamen serving after 1917 for advice on searching within registers of seamen and seamen’s pouches to establish voyage details which you may be able to apply to the service of officers.

From 1845 onwards a system of examinations was introduced for masters and mates. At first it was voluntary and applied only to foreign-going vessels.

Records of masters and mates passing the voluntary examination are in series BT 143 (which includes a name index) and in BT 6/218-219.

Details of masters and mates who have voluntarily passed an examination appear in the Lloyd’s Register of Shipping (copies of which are available at The National Archives). The details are in an appendix entitled ‘An Alphabetical List of all the Masters and Mates in the Merchant Service…’.

From 1850 onwards, an officer was only officially qualified or ‘certified’ as an officer if he had been awarded a Certificate of Competency (by passing an exam) or a Certificate of Service (for long service). A certificate came with a number (and new numbers were assigned if a replacement certificate was issued following the loss of the original).

Registers were created to record the awarding of these certificates to officers and what they had done to qualify for them. For each officer registers provide:

Consult BT 122-126 and BT 128 (index in BT 127). Once you have obtained a certificate number from the index in BT 127, consult the table below for the respective record series reference:

Certificate numbers with a letter(s) prefix – NWS – were issued in the colonies. Consult series BT 128 for details.

The certificate number obtained from the index indicates:

Certificate numbers with a letter(s) prefix – NWS – were issued in the colonies. Consult series BT 140 for details.

Numbers were allocated to the certificate of service in BT 130 are as follows:

We hold indexes to registers of certificates of competence and service for cooks, 1913-1956 in BT 319. The National Maritime Museum holds the registers (see below).

Voyages in the registers were usually recorded either as:

These entries do not simply record a single voyage, but a half year (January to June or July to December) during which the seaman was engaged on a particular ship. During that period the ship may have been on several voyages, and he may have been engaged for some or all of the period. 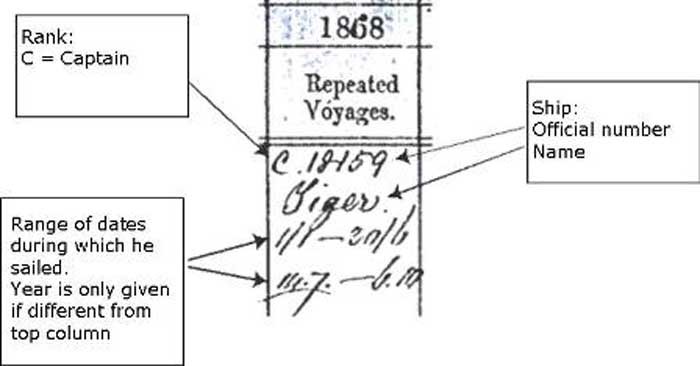 A register entry for home trade voyages, from BT 126.

These entries record a single voyage during which the seaman was engaged on a particular ship.

A register entry for a foreign trade voyage, from BT 124.

Use our guide Abbreviations in merchant seamen’s records to interpret the records.

The Lloyd Captains’ Registers were compiled from the records of certificates issued to foreign-going masters. They cover masters with foreign trade certificates sailing either as masters or mates.

An incomplete set of captains’ registers is available on microfilm in The National Archives reading rooms. They contain the following information:

Combined indexes to certificates of competency, 1910-1969

The cards are of different colours depending on the type of qualification:

Chronological registers of the issue of certificates, 1913-1984

Consult registers and renewals of certificates of competency of masters and mates in BT 317; masters, mates and engineers in BT 318; just engineers in BT 320 (1913-1935) (in process of transfer from National Maritime Museum under references RSS/ENG/5-6); and fishing officers in BT 396.

The entries are arranged in date order and provide:

Registers of certificates of competency and service, 1850-1927

Apply for a copy of a certificate from the National Maritime Museum’s Caird Library – you will need the certificate number.

Registers of certificates for engineers

As well as the registers of certificates of competency for engineers at The National Archives (in series BT 139, see above), the National Maritime Museum holds registers for the following years and certificate numbers:

Application for certificates made in the colonies

Visit the Crew List Index Project (CLIP) website, which has information about merchant seamen on British registered ships from 1861 to 1913.

Consult copies of the Mercantile Navy List for 1860 to 1864 in The National Archives reading rooms for alphabetical lists of masters and mates (with certificate numbers) as well as one-line obituaries for deceased seamen.

Read My Ancestor was a Merchant Seaman by Christopher and Michael Watts (Society of Genealogists, 2002) – this title is also available in our shop.

Merchant Navy seamen in service before 1914