How to look for records of... Merchant Navy seamen in service before 1914

This is a guide to finding records of merchant seamen in service before the start of the First World War. Before 1835, central government took little interest in keeping records of individual seafarers, so most of the records covered in this guide date from between 1835 and 1913. For details of seamen in employment before 1835 your best bet is to consult muster rolls or to look elsewhere, perhaps in private collections or old newspapers.

If you are looking for a record of a merchant officer, read our guide on Officers in the Merchant Navy.

What do I need to know before I start?

Between 1858 and the First World War the Merchant Navy did not keep registers of its seamen. This means that for these years the only record you are likely to find of an individual merchant seaman is his appearance in agreements and crew lists, for which you usually need to know the names of the ships he served on.

How to trace a ship

Sometimes the only way to track down a record of a seaman is to trace the records of the ships he served on. You can use the CLIP (Crew List Index Project) website to trace a ship by the:

How to interpret abbreviations in the records

See our guide to Abbreviations in merchant seamen records for further help interpreting information in these records.

From 1835, the new Register Office of Merchant Seamen (later the Registrar General of Shipping and Seamen) recorded details of seamen in registers. The information came from the agreements and crew lists submitted by the masters of ships at the end of one or a series of voyages.

Search by name in the registers of merchant seamen from 1835 to 1857 at Findmypast.co.uk (£). You may find more than one record for a single seaman, depending on his years of service. These are digitised copies of the following National Archives collections:

The records typically include:

Merchant Navy apprentices served their apprenticeship under the terms of an indenture (contract) which usually stipulated a term of four or five years working for a particular master. We hold a sample of these indentures and the original indexes which were used to keep track of them are available online. Search the indexes of Merchant Navy apprentice indentures between 1824 and 1910 (BT 150/1-53) on Ancestry (£). The indexes usually indicate:

The indentures themselves are in BT 151 and BT 152 but provide little more than the indexes themselves contain. Furthermore, only a sample of these original indentures survive – for more information see Merchant Navy apprenticeship indentures, 1824-1953 below.

Search the register of duties paid for apprentices’ indentures on Ancestry (£). These records of apprenticeships, from IR 1, are for various professions, including seamen both as apprentices and as masters.

From 1747 masters or owners of merchant ships were required to keep a muster roll giving details of the number of crewmen and the ship’s voyages.

Search the muster rolls in BT 98 by date range and port of registry:

We provide more advice on finding muster rolls in our guide to these records.

In 1835, following the Merchant Shipping Act, muster books were replaced by similar records known as ‘agreements and crew lists’.

There is more advice on finding crew lists and agreements in our more in-depth guide to these records.

Search the agreements and crew lists in BT 99 by the ship’s official number for the period 1861 to 1938. For the years 1881 and 1891 only you can search by official number, ship’s name or name of crewman.

There is more advice on finding crew lists and agreements, 1861-1938 in our more in-depth guide to these records.

Merchant Navy apprentices served their apprenticeship under the terms of an indenture (contract) which usually stipulated a term of four or five years working for a particular master. We hold a sample of these indentures – a two month sample for every five years between 1824 and 1955.

Search for copies of these indentures in BT 151 (all vessels) and BT 152 (fishing boats only) by date and port. There are original indexes to these records in BT 150, available online for the years 1824-1910 (see ‘Online records’ section above). The indentures provide more or less the same information as the indexes and if you have seen an index entry you are unlikely to gain any additional insights form the indenture itself – though they do contain the signatures of the apprentice and master.

Most agreements and crew lists for this period are held in repositories other than The National Archives. Search at the following:

Search the Apprentices of Great Britain 1710-1774 database on Findmypast.co.uk (£) for indexes to apprenticeships in IR 1.

Consult the Crew List Index Project (CLIP) website, which has information about merchant seamen on British registered ships from 1861 to 1913.

Christopher and Michael Watts, My Ancestor was a Merchant Seaman (Society of Genealogists, 2002)

Where home trade voyages are recorded in the registers, entries do not simply record a single voyage, but a half year (January to June or July to December) during which the seaman was engaged on a particular ship.

A seaman may have left the UK on one ship and returned on another. Equally, the ship may have departed in one year and returned in the next.

The registers are of two types. The entries in the earlier registers, part 1 1835-1840 (first image) look slightly different in layout to those from the later period 1842-1844 (second image). 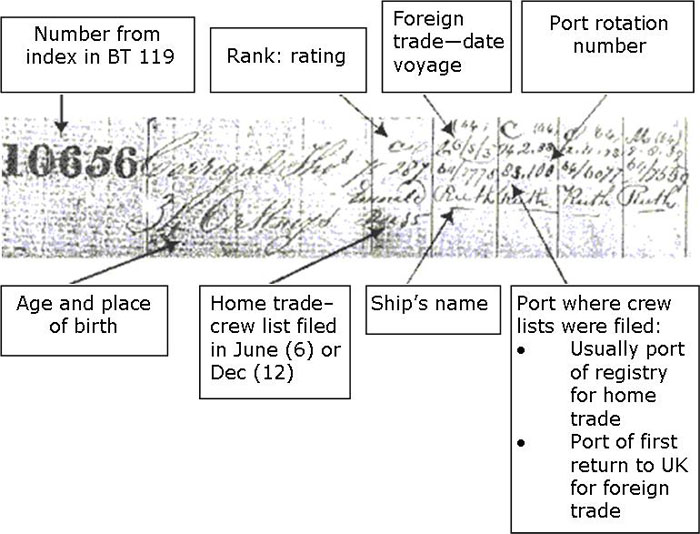 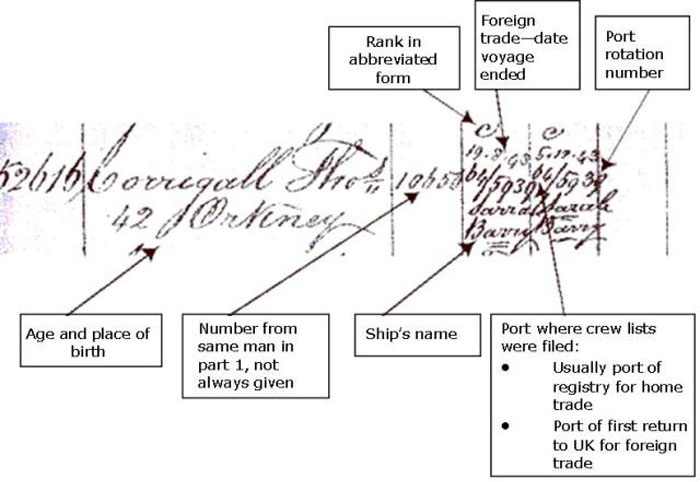 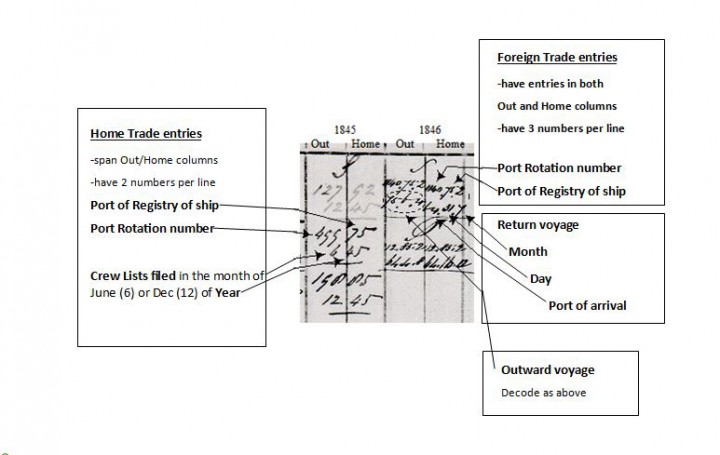 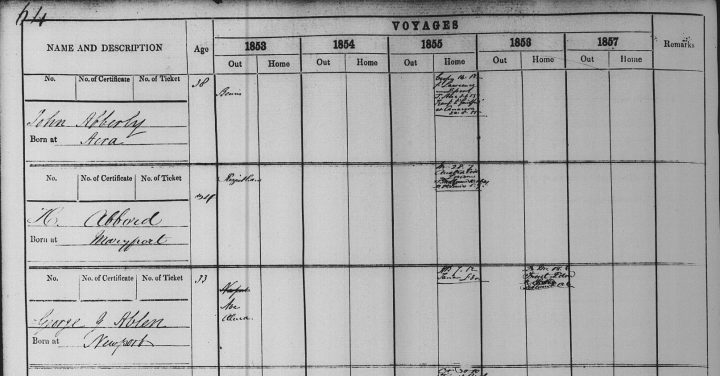