How to look for records of... Merchant seamen’s campaign medal records 1939-1945

The medals were claimed and issued from 1946 to 2002. Medals were not automatically issued, but had to be claimed by the merchant seaman. You can find out whether a medal was issued by looking at the markings on the records.

The seamen’s discharge book numbers are usually listed, and you may find the date and place of birth too.

You can search (£) the records in Discovery, our catalogue, by filling in the form below.

You do not have to fill in all fields to search.

Nine types of medals were awarded to British merchant seamen who served in the Second World War and who met the qualifications for each medal. Eight of them are searchable here whilst the ninth, the Arctic Star, was not awarded until 2012 and records of its award do not exist at The National Archives. For more information on the Arctic Star and advice on how you can still apply for it, see our guide to Merchant seaman’s medals and honours.

The image you order will usually come with a number of medal records for other seamen. If you are ordering more than one record for seamen with similar names, you should check if their records are on the same page. If they appear on the same page, you should only pay one fee. 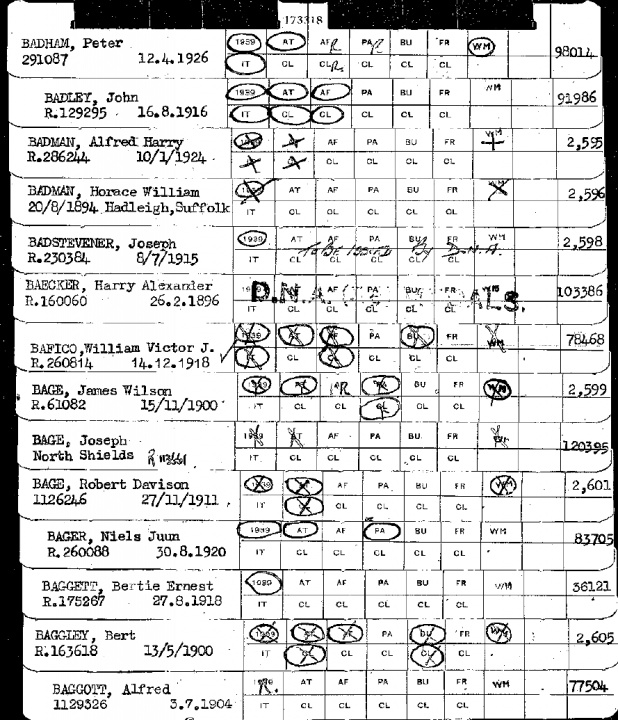 The column on the right of each record contains a reference number to the entitlement file held by the Registry of Shipping and Seamen.

The following codes may be found on the record:

Markings found on the record may include:

The letter ‘R’ over a code can signify that an application for that medal was reviewed and refused.

A single oak leaf emblem attached to the War Medal ribbon denotes a Mention-in-Despatches; the silver oak leaf, a King’s Commendation for Brave Conduct. Even if a person had several ‘mentions’, he would only have one emblem.

Anyone who qualified for both the Pacific Star and the Burma Star would be awarded the first Star earned. A Clasp would be worn to signify service for the other Star.

Anyone who qualified for both the France & Germany Star and the Atlantic Star would be awarded the first Star earned, with a Clasp. A silver rose on the ribbon bar signifies the award of a bar.

If a seaman is not listed, it may be because they have not claimed their medal entitlement. To find out about a seaman’s entitlement, contact the Registrar General of Shipping and Seamen.