How to look for records of... Naturalisation, registration and British citizenship

Use this guide if you are looking for records of how, when or if a person obtained British citizenship up to October 1986.

For naturalisation certificates after 1 October 1986, and for records of indefinite leave to remain from any date, go to the United Kingdom Visa and Immigration Service.

Do not use this guide for legal advice. For questions about any living person’s rights and status in the UK you should contact the United Kingdom Visa and Immigration Service or seek legal advice from a solicitor. The National Archives cannot provide legal advice of any kind.

Naturalisation is the legal process by which a person changes their nationality.

For hundreds of years, foreign nationals living in the UK, and sometimes living abroad, have been able to attain British citizenship through naturalisation.

The criteria and process have changed over the years but for successful applicants the end result has been the same: that person is granted the same legal rights and status of a natural-born British citizen.

Before 1844 naturalisation was granted only by a private act of parliament. The procedure was expensive and only a few could afford it. After 1844, right up to the present day, naturalisation has usually been granted by the Home Office.

3. What are registrations of British nationality?

People born in Ireland before 1949 were, likewise, considered British subjects and after the 1948 Act could also register British nationality; however, anyone born in the Republic of Ireland after 1948, seeking British citizenship, would need to apply to naturalise.

Registrations ended in 1981 and from then on all foreign nationals, whether from the Commonwealth, former British colonies or any other country in the world, have had to apply for naturalisation to become British citizens.

4. Record types and the information they contain

The process of naturalisation or registration produces paperwork. Most of the surviving paperwork, up until 1986, for successful naturalisations is now held at The National Archives. There are two broad types: the document declaring someone’s naturalisation and the background papers that were submitted to support their application. 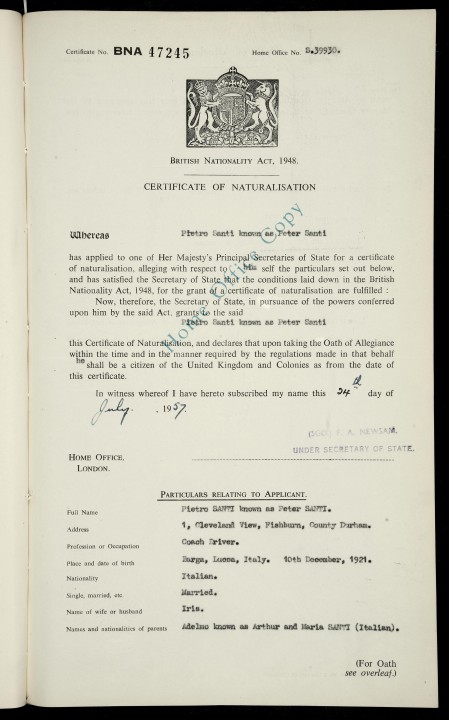 Issued to all people who are granted British citizenship through naturalisation.

The Home Office indexes to naturalisation certificates cover 1908-1980. From June 1969 the Home Office did not keep a set of duplicate certificates issued in the UK for foreign nationals so the index is the only source of detail until 1980. The indexes contain:

These are the forms individuals filled out when applying for naturalisation, though they rarely survive if naturalisation was not granted. These papers provide more detailed information on the applicant than the naturalisation certificate itself and may contain all or some of the following information:

Registrations issued before 1970 tend to be in the form of an application with information similar to naturalisation certificates. From 1970 they tend only to include the full name of the applicant, their date and place of birth.

Before 1844 the only way to naturalise was through a private Act of Parliament. Often a single act, usually appearing on parchment rolls, covered multiple individuals and contained nothing more than their names and professions. Sometimes, however, you may find the names of the naturalised person’s parents and the place of birth, particularly in the case of acts passed for just a single individual.

This section covers records of foreign nationals becoming British citizens through naturalisation between 1949 and 1986. However, records of British citizenship after 1949 and up to 1981 for people from British colonies and Commonwealth countries, are more likely to be registrations of British nationality – see section 6 for advice on these records.

See section 4 for an explanation of what information the following types of records contain.

Apply for duplicate certificates through our Certificates of British citizenship page

Search by certificate number or by name followed by nat* in our catalogue, using the box below.

5.4 Naturalisation case papers of foreign nationals who arrived in the UK 1934-1948

These records are of foreign nationals, most of them European, arriving in the UK between 1934 and 1948 and who at some time after their arrival applied for naturalisation. They are held in series HO 405. For details of the kinds of papers they contain see the HO 405 description.

Search our catalogue, using the box below, by last name for these naturalisation case papers.

Not all documents in HO 405 are available for public view. The documents are subject to 100 year closure (although you can requested access with a Freedom of Information request) and only about 40% of applications in this series have survived. Files may also contain later correspondence, mostly until the mid-1960s but some as late as 1996.

The British Nationality Act 1948 created the new status of citizen of the United Kingdom and the colonies. Under this act, people from former colonies and British Commonwealth countries could register as British citizens.

See section 4 for details of the information that records of registration contain.

Apply for duplicate certificates through our Certificates of British citizenship page.

Search by certificate number or by name followed by reg* in our catalogue, using the box below.

7. Renunciations and no evidence of naturalisation

Among the records of naturalisation sent to The National Archives from the Home Office are records of people who have renounced their British citizenship.

Search by name followed by the word ‘renunciation’ in our catalogue, using the box below.

7.2 No evidence of naturalisation

This section covers records of foreign nationals becoming British citizens between 1870 and 1948. The 1870 Nationality Act superseded the 1844 Nationality Act which governed naturalisations up to 1869.

Search by name in record series HO 334 on Ancestry.co.uk and download (£) naturalisation certificates and declarations of British nationality for these years.

However, certified copies are available only from The National Archives. If you need a certified copy of a certificate from this period you can request one from our online catalogue. Search for a certificate in records series HO 334 and HO 409 by certificate number or by name followed by nat* using the box below:

Search by certificate number or by name followed by nat* in record series HO 334 and HO 409 using the box below.

Search our catalogue, using the box below, by last name for case papers (HO 405).

The documents are subject to 100 year closure (although access can be requested using our Freedom of Information form) and only about 40% of applications in this series have survived. Files may also contain later correspondence, mostly until the mid-1960s but some as late as 1996.

See section 4 for an explanation of what information naturalisation certificates and case papers contain.

The original private acts of Parliament are kept at the Parliamentary Archives, though there are very few naturalisation acts after 1844.

There are some records of naturalisations from this period at The National Archives among the following records:

Most foreign settlers in the UK before 1844 did not bother going through the legal formalities of naturalisation and so do not appear in these records. Before 1844 the only way to naturalise was by a private Act of Parliament.

Naturalisations during this period were recorded, or ‘enrolled’, on documents known as close rolls. The close rolls are in record series C 54.

To work out which pieces in C 54 to look at you will need to first consult the printed index to C 54 which itself forms a separate series, C 275. The index is arranged by year so you will need at least a rough idea of when the naturalisation took place (look at the correspondence and case papers in HO 1 first if you don’t know the year of naturalisation).

To use the index and view the rolls themselves you will need to visit us. On consultation of the appropriate section of the index you may find a name entry for the person who was naturalised, along with a number that will form the key part of your C 54 reference. For more advice speak to staff in the Map and Large Document Reading Room at our building in Kew.

See section 4 for an explanation of what information naturalisation certificates and case papers contain.

The original private acts of Parliament are kept at the Parliamentary Archives, though there are very few naturalisation acts after 1844.

There are some records of naturalisations from this period at The National Archives among the following records:

10. Naturalisations before the 19th century

The only way to naturalise before the 19th century was by a private Act of Parliament, though there were occasionally public acts passed to enable the naturalisation of specific groups of people at specific times, as was the case for foreign protestants living in America in the mid-18th century (see below).

The original private acts of Parliament are kept at the Parliamentary Archives. However, there are some records of naturalisations before the 19th century at The National Archives among the following records:

After a naturalisation by Act of Parliament the successful applicant would take the Oath of Allegiance and Supremacy in a court of law, swearing their loyalty to the Crown. There are separate sets of records for these oaths and where to locate them depends on the court where the oath was taken. Quarter Sessions Courts and the Court of Kings Bench were among those courts where the oath was taken:

Every year lists of those naturalised were sent to the Commission for Trade and Plantations in London, where they were copied into entry books.

A list of the names in these records is in the published Naturalizations of Foreign Protestants in the American and West Indian Colonies, also available in our library.

The Huguenot Society have published indexes to the records of naturalisations and denizations up to 1900. Some of these indexes are available online on the Internet Archive:

Some of the indexes are also available in our library:

Versions of these indexes are held with the printed version of our catalogue at our building in Kew.

Denization was a legal process granting limited naturalisation to aliens. It granted a foreign national almost equivalent status of native-born Britons and provided them the protection of the law.

However, those granted denization were still subject to alien rates of tax, unable to vote, hold civil or military office or inherit land.

Denization was granted by letters patent and this required a payment, so, as with naturalisation in this period, denization remained the preserve of the wealthy.

Click on the references below to search by name of applicant for denizations made by letters patent in:

Use the Huguenot Society Indexes and Calendars of Patents Rolls at The National Archives in Kew, looking under words such as ‘denizations’ or ‘indigenae‘, to search for denizations made by letters patent in:

12. Records in other archives

Consult the Huguenot Society website, which includes information about their archives and details of publications to help you trace individual immigrants (not just Huguenots), including indexes of naturalisations by private Act of Parliament up to 1800.

The original naturalisation acts are kept at the Parliamentary Archives.

Search Parliamentary papers (institutional subscription required) for indexes of all naturalisations from 1844 to 1961.

This is held at Westminster Abbey Muniments and Library.

If you know the naturalisation certificate number then you can use the following tables to determine details about the status of the person who applied for naturalisation. The table may also help you work out what you should do to search for a duplicate copy of the certificate.

Those issued under both the Naturalisation Act, 1870, and the British Nationality and Status of Aliens Act, 1914, are searchable by name in Discovery, our catalogue.

13.2 Naturalisation certificates and registrations issued under the terms of the British Nationality Act, 1948

Roger Kershaw and Mark Pearsall, Immigrants and Aliens: A Guide to Sources on UK Immigration and Citizenship (The National Archives, 2004)