How to look for records of... Medieval maritime personnel and ships

Use this guide to find records relating to English maritime personnel, ships (primarily those in service to the Crown for war) and naval administration from the late 12th to the early 16th century.

‘Ships’, in the medieval sense, was a term which applied specifically to large, deep-hulled sailing vessels, such as cogs and hulks. This guide also covers records of other sailing craft such as barges and ballingers.

Most of the records that date from prior to the mid-15th century are written in Latin, with the rest in French or English.

The majority of the records are not available online. In most cases, to search for (and view) them you will need to visit us at our building in Kew.

2. The navy in the medieval period

During the medieval period England did not possess a navy in the modern sense. There was no permanent fleet specifically assigned for defensive and offensive operations at sea in service to the realm. Ships were raised for military service on an ad hoc basis according to the policies and needs of the English Crown.

The closest thing medieval England had to a navy in the modern sense were those ships which the monarchy directly owned or held shares in. These fleets were not permanently maintained and for much of the medieval period (with the exception of the reigns of Edward III and Henry V) were modest in size.

The raising and financing of fleets by the Crown was administered by royal officials in co-operation with local officials of maritime counties and ports or with admirals assigned to oversee and raise fleets in designated regions.

Detail from the illuminated border of the Treaty of Amiens between England and France, 18 August 1527. Catalogue reference E 30/1113. The full image is available through our Image Library.

Very few naval battles actually occurred during the Middle Ages, primarily because the role of the navy was usually to aid the army: transporting troops or supplies to theatres of war, for example, or to garrisons in castles and towns within the British Isles and on the continent.

Soldiers made up the majority of fighting manpower for naval expeditions, with support from ships’ crews, but there were no specialist troops trained specifically for naval warfare before the mid-17th century.

3. What kinds of records does The National Archives hold?

There are no records that equate to modern service records for this period, nor was there a separate body for managing naval administration – the Admiralty was not created until much later.

Instead, royal clerks and officials in the departments of the Exchequer and Chancery oversaw and handled the administration of naval business during the medieval period and it is primarily in the records of these two departments that most of the information on maritime personnel and administration from this era is found.

Records of Crown administration and expenditure on shipping and maritime operations in our collections begin at the end of the 12th century in the Pipe Rolls and appear in other kinds of records from the early 13th century.

The records we hold can contain information on:

5. How to search for and view original records

To view original records at The National Archives you first need to find document references in our catalogue. A search for an individual’s or ship’s name in the online catalogue will rarely find a relevant document reference for records from this period. In most instances, to get a document reference you will need, instead, to consult printed and published finding aids, including calendars, containing summaries of the records. These finding aids are available at our building in Kew.

Most of The National Archives document references for these records begin either with E or C, indicating that they are records of the Exchequer or Chancery respectively.

If you can find, or already have, exact document references then you can order copies of records to be sent to you without having to visit us.

The following sections of this guide provide more detailed help on how to locate document references.

No formal service records for individual mariners were created in the medieval period so any information you find on individual maritime personnel will usually be very limited in detail.

There are no crew lists for this period; we do hold a small number of ships’ musters providing the names of individual crew members, mainly for royal ships. The majority of records in which maritime personnel are mentioned only name the master of the ship and record the number but not the names of other crew members.

To find evidence of naval service to the Crown you may have to consult a large number of different record series. Searching with an individual’s name on our catalogue will rarely find a relevant record.

Use the advice in the table below to search the record series most likely to contain information about individuals.

7. Records of vessels in English ports and in Crown ownership

Records of ships from this period include records of the requisition of vessels over a certain tonnage in ports across England; orders to impress or release certain named vessels; evidence of shipping capacity in ports; inventories of equipment on royal ships; the accounts of royal officials handling payment of wages and expenses and other records.

Vessels under the direct or nominal control of the English monarchy were known as ‘King’s Ships’ and in the 14th century the office of the clerk of the King’s ships was created to help manage the burden of administration.

You may come across the terms ‘ship of Westminster’ and ‘ship of the Tower [of London]’, both used in the records to identify King’s ships and the latter term sometimes used to describe any warship.

For more terms, see the glossary in the Appendix of this guide.

See the table in section 4 for advice on searching for records of merchant vessels on the Merchant Fleet of Late Medieval and Tudor England online database.

For original records, use the following keywords to search the record series listed below:

Click on the references to search with the series with the keywords listed above.

You can also try searching with a ship’s name or the master or owner of a ship but this is less likely to find records as very few of the document descriptions in our catalogue contain this kind of detail.

The record series below cannot be searched by keyword in our catalogue so follow the search advice in the table to locate documents: 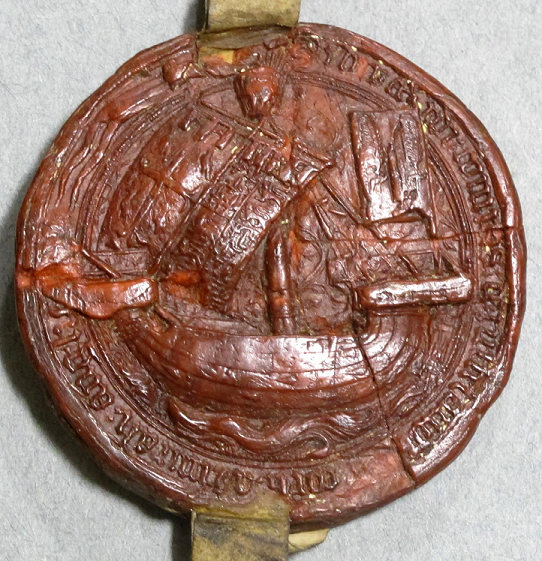 7.3 Images of ships in seals

Some medieval seals, used to authenticate documents (such as charters, letters and writs) and also used literally to ‘seal’ documents, contain contemporary impressions of ships. These are primarily seals for the municipal and royal officials of port towns as well as seals for the office of admiralty. The National Archives holds a rich collection of seals and advice on searching for them is in our guide on seals.

8. Records of raising and supplying fleets for Crown service

When raising fleets for Crown service, orders would be sent either to royal officials or, from 1295, to admirals in charge of ports in a particular region, to commandeer ships and mariners for the king’s service.

Orders may also have been sent to local officials in maritime counties and ports to assist in the seizure of ships or to gather supplies for shipment.

These orders were usually recorded or referred to in the Close Rolls (C 54) and Patent Rolls (C 66).

8.1 Searching the rolls for records from mid-13th century onwards

There are published English calendars, available in our reading rooms, for Close Rolls from 1272 and for Patent Rolls from 1232. Find information in the rolls from these years onwards by following these steps:

Step 1: Look for names of royal officials (such as serjeants-at-arms, royal clerks or admirals) or keywords such as ‘ship’ or ‘navy’ in the indexes of the calendars.

Step 2: From the calendar entry referenced by the index, note the year and the membrane. Where there is more than one roll covering a single year, the documents will be divided into parts and so where applicable the correct part in which the entry falls needs to be noted from the calendars.

Step 3: Use the C 54 series search or the C 66 series search to search by year or year range and if applicable by part. Dates will need converting from regnal years to calendar years. Use ‘A Handbook of Dates: For students of British history’, eds. C R Cheney and Michael Jones available in the second floor reading room or online converter tools.

Step 4: From the search results, using the appropriate C 54 or C 66 references, request the roll referred to in the calendar.

8.2 Searching the rolls for records from the early 13th century

For entries in the close rolls and patent rolls that precede the published English calendars use the published Latin transcriptions available in the reading rooms at The National Archives.

8.3 Searching for other records

Other record series contain material on maritime activity in specific areas of English control, such as:

Records of expenditure relating to maritime operations, logistics and service for royal expeditions, towns or garrisons may include information on:

Click on the series references below to search in each series with keywords like ‘ship’, ‘victuals’ or ‘mariners’:

The following series of Pipe Rolls, chronologically arranged, are not keyword searchable in the catalogue so follow the search advice in the table to locate documents. Accounting for a wide range of expenditure, they include details of royal expenditure on the construction, supply, maintenance and raising of ships.

Many local county archives, particularly those in counties with a strong tradition of shipping and seafaring, hold records of:

Use our catalogue to search for descriptions of records held in county archives around the country.  On the search results page, use the filters on the left hand side to restrict results to ‘Other archives’.

The British Library holds illuminated manuscripts with imagery of ships, sailors and naval warfare as well as a small proportion of administrative records such as some wardrobe accounts.

The National Maritime Museum at Greenwich holds medieval seals from port towns both within and outside the British Isles which contain representations of ships. You can also find letters, manuscripts and original research notes on archival sources amongst their collections.

The majority of the records up until the mid-15th century are written in Latin, with the rest in French or English. You may therefore find our Latin and palaeography tutorials useful.

The following books are available in our library.

Nicholas, N H ‘A History of the Royal Navy from the earliest Times to the French Revolution’ (London, 1847), two volumes.

Below is a glossary of nautical terms for items of ship equipment and apparatus found in medieval records held at The National Archives.

There are more comprehensive glossaries in:

Bear in mind that the records contain variations in the spelling of many of these terms.

Freightage – transport of goods in bulk

Shores – wooden beams or props to support a ship when aground

Sounding line – A weighted line with distances marked off at regular intervals, used to measure the depth of water under a boat

Tackle – rigging and apparatus for a ship

Tontight – Refers to a unit of cargo capacity or ton weight