How to look for records of... Seals

The National Archives holds over a quarter of a million seals dating from the 11th to the 20th century. Much of the collection, which includes a number of significant royal, government and colonial seals, is from the medieval and early modern periods. Use this guide for advice on how to locate and view these seals.

Images of some of the seals and related records detailed in this guide are available to view online. Others are not and to view these and the original seals themselves you will need to visit us.

2. What are seals and what do they tell us? 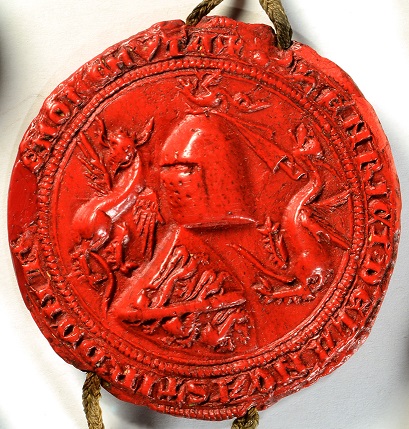 The term seal is usually applied to the impression left by the stamping of an engraved metal die or ‘matrix’ which has been pressed into a material such as wax, but it is also used to refer to the matrix itself. Often bearing their owner’s portrait or coat of arms they were used to authenticate documents (such as charters, letters, writs) in much the same way as we use signatures today.

Seals were also used literally to ‘seal’ documents, fulfilling the same role today as gum on an envelope. They could either be attached to a document by a tag, tongue, cord, or placed directly on the face of the document.

Seals can tell us much about a seal owner. They speak of authority and legitimacy, and the iconography and legend (around the seal circumference) often suggest something about the status of the owner and how they wanted to be regarded.

They can also provide us with valuable information for historical studies of:

A seal might also help identify and date the document to which it is attached.

The National Archives holds around 6,500 plaster of Paris and silicone rubber moulds of seals in our collection. These were created by the Repairing/Conservation Department of the former Public Record Office from around 1880 to 1995 but were never formally accessioned. You can now see and download images of them for free via our catalogue.

Search PRO 23 by name of the seal owner or by broad category. 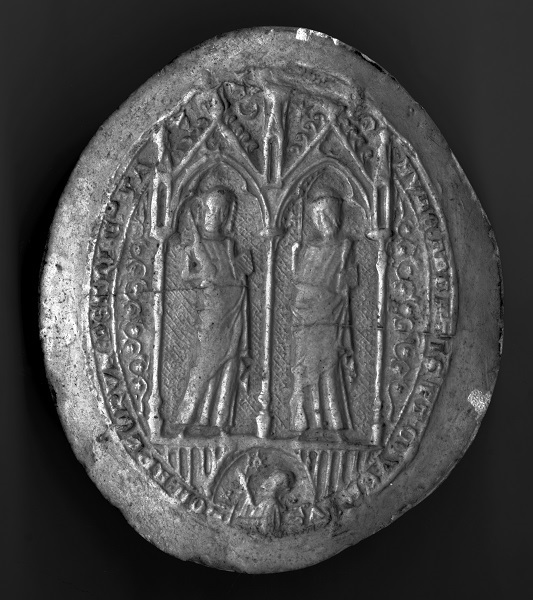 An image from the Seal Moulds Database (catalogue reference: PRO 23/2361)

The document downloads provide both a high resolution digital image of a surviving mould, like the image shown on the left, and information about:

They can be used in conjunction with the seals card index to identify seals in The National Archives’ collection.

3.2 Seals from the Duchy of Lancaster

The seals from DL 25 and DL 26 are mostly personal seals but there are also:

Search by name, place or descriptive keyword. Each listing in our catalogue contain a description of the design of the seal, for example ‘lion sleeping facing right with four bushes above’ (from the description for DL 25/1336/1067). You can search for seals by matching your search terms to these descriptions.

If you wish to start a new search, return to the search box on this page.

4. How to locate original seals at The National Archives 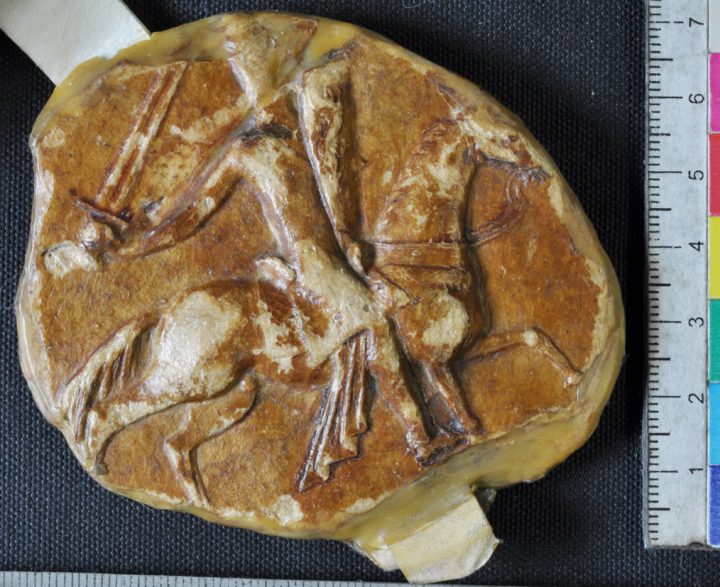 There is a card index of seals held at The National Archives. You can use it to locate the seals themselves but also for detailed descriptions of the seals.

The card index is available in two forms:

Search QFA 1, the Digitised Seals Register, by category (but not initially by name of owner). For example, to find the great seal of William II enter the search terms, ‘England’ and ‘Sovereign’. Download the card images (for free) and look for William II in the sequence of reigns.

Located in a set of drawers housed in the Map and Large Document Reading Room, the cards are divided into drawers arranged by the following headings:

Use these three volumes, each with indexes, which provide document references and contain photographic reproductions of the seals:

Use the typescript Catalogue of Seals compiled by PDA Harvey which includes all the online seals from DL 25 and DL 26 as well as those from LR 14 and LR 15. Consult the name and place index to locate records.

Search our catalogue to locate records using keywords and dates.

Find other major seals collections at:

A collection of plaster casts are held by the Society of Antiquaries of London.

Visit the National Archives’ shop for a range of books

Use our library catalogue to find a recommended book list.