Use this guide for advice on how to find death duty records from 1796 (when several death duties were introduced) to 1903 (when the death duty registry system was replaced).

These records were originally created to record whether or not and how much death duty was paid on the estate of someone who died. Today they are a useful resource for family historians and other researchers as they can provide a wealth of useful information on the deceased, their friends and relations. Information can include:

For advice on finding a will, read our guides to looking for wills and administrations before 1858 and after 1858. The National Archives only holds wills proved by the Prerogative Court of Canterbury.

2. What are death duties?

Death duties were introduced in 1796 and are equivalent to what we would more commonly refer to today as inheritance tax. The term ‘death duties’ in this guide refers to three taxes:

Wills and administrations were processed by the probate courts which, before 1858 in England and Wales, were ecclesiastical courts found across the country, with multiple courts in each county. The probate courts sent a copy of each will and administration to the Inland Revenue where death duty was calculated. The Inland Revenue created registers to record all this incoming information from the courts. There were two main types of register: those for the Prerogative Court of Canterbury and those for all other courts, collectively known as the ‘country courts’. Larger courts might have had a number of registers for each year; smaller courts might have a single register covering more than one year.

There were separate sets of indexes created to help the clerks find entries in the registers at later dates. These indexes are still used today to help family historians and other researchers find the entry they are looking for. Between 1796 and 1811 each probate court was indexed separately.

There are other record types and they are described in section 10.

The information in indexes and registers can include:

Notes were sometimes made on the registers many years after the first entry. They recorded details such as:

Before 1812 the registers include very brief abstracts of wills. From 1857 there are entries in death duty registers for all estates worth more than £20. However, those worth less than £1,500 didn’t have the taxes collected and not much was recorded about them.

5. How to search for records

To find an entry in the death duty registers you will first need to search the indexes (IR 27) to the registers online, see Step 1 below. The indexes provide you with the folio number you need to get to the right register. Registers up to 1857 are on microfilm, which has been digitised by FamilySearch.

You can view the digitised images prior to 1858 (IR 26) at Family History Centres worldwide, and at FamilySearch Affiliate Libraries, including The National Archives. From around 1858 onwards the original registers have not been digitised, or available on microfilm. You will need to visit us.

This is how you find a register entry:

Step 1: Search for an index entry

Go to findmypast.co.uk (£) and search for digitised images of the original indexes (from series IR 27) by the name of the person who died along with the year of death or the county where the person died, or both.

The index entry and transcription should, between them, indicate whether it was a will or an administration, the court and year in which it was proved or granted and the corresponding folio or entry number in the register. From 1796 to 1811 there will be an ‘entry number’ and in later indexes a ‘folio number’. Note down this number. An index entry with no folio reference means that no tax was payable, in which case there will be no death duty record.

The example used in the image below shows the index entry for William Lock from 1826:

Death duty index entries (IR 27) for wills from 1826, including that of William Lock.

Step 4: View all the document references for registers from the respective year

Go to IR 26 in our online catalogue – this is the series reference for the registers. Use the search box to search either with the word ‘will’ or ‘administration’ (depending on the type of index entry you found) and in both the date range boxes enter the year that the will or administration was proved or granted. Click ‘Search’.

Your search results will be presented to you in ‘Relevance’ order. Change them to display in ‘Reference’ order. This will make it easier to scroll through to the right range of folio numbers.

The dropdown menu displayed above search results allows you to sort your results by ‘Reference’ instead of the default ‘Relevance’.

Step 6: Find the document reference for the folio number

Step 7: Look through the register

You will need to visit us to see the registers. Registers up until around 1858 are available on microfilm; from around 1858 onwards you will need to view the original registers. Once you have the right reel of microfilm or original register for the IR 26 reference you noted st Step 6, scroll or page through to the folio (entry) number you noted at Step 3. Folio numbers usually appear in the top corners. 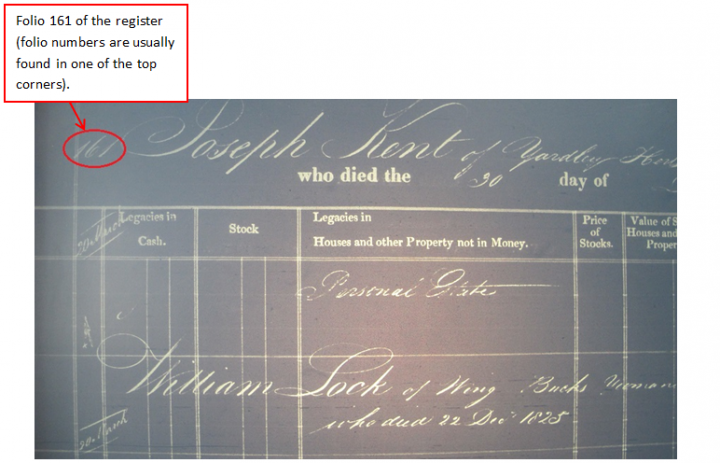 If you cannot locate an entry, see section 9 for a list of possible explanations. Alternative sources include the specimen death duty accounts in records series IR 19 – see section 10 for more alternatives.

6. Understanding references in the registers

Some entries in the registers may lead to other registers or records:

7. Understanding column headings and abbreviations in the registers

*These columns sometimes contain no information, presumably because duty was never paid or because there were insufficient assets to pay for legacies. In place of such information is often a reference such as ‘RA 767/46 1 LD’ which refers to ‘residuary accounts’. These have been destroyed, although a few still survive in IR 19 and IR 59.

8. Other abbreviations used in the registers

8.1 Abbreviations found in various columns of the death duty registers

8.2 Abbreviations used to describe relationships (under ‘consanguinity’ in the register)

8.3 Abbreviations used in the ‘contingency’ column

There are a number of reasons why you might not find a death duty entry:

Read the IR 26 series description in our catalogue for information on the history and arrangement of death duty registers.

The following record series also relate to death duties – click on the references to search within the respective series:

11. Records in other archives

Copies of wills from the major local probate courts in Cornwall, Devon and Somerset were sent to the respective local archives. See the Somerset Heritage Centre website for more information about the wills they hold.

You can also search our catalogue for records held elsewhere. Refine your results using the filters.

Use our library catalogue to find a recommended book list.

The books are all available in The National Archives’ reference library. You may also be able to find them in a local library. You can buy from a wide range of history titles in our bookshop.

Births, marriages and deaths in England and Wales

Wills and administrations after 1858

Wills and administrations before 1858