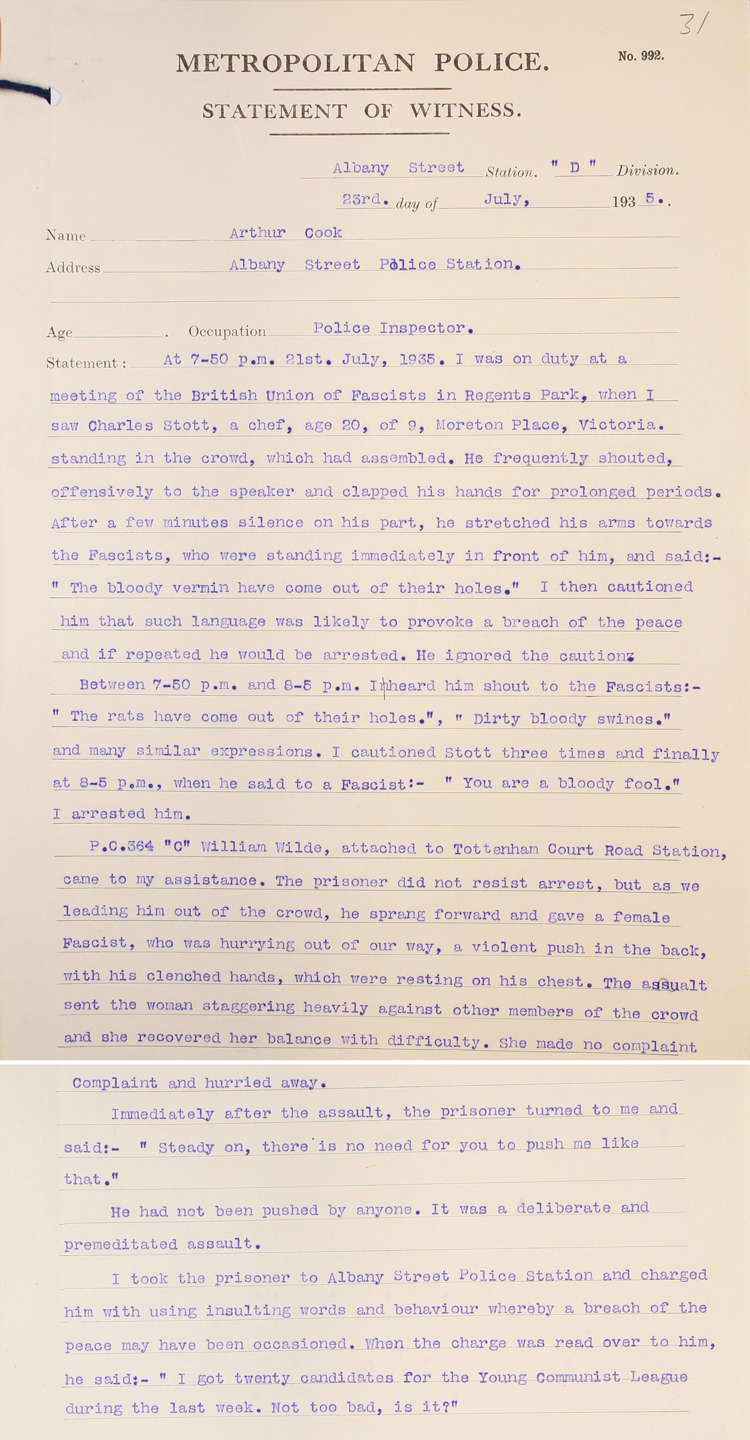 Statement from a Police Officer after arresting a communist at a Fascist meeting, 23rd July 1935 (MEPO 2/3079)

At 7.50 p.m. 21st July, 1935, I was on duty at a meeting of the British Union of Fascists in Regent’s Park, when I saw Charles Stott, a chef, age 20, of 9, Moreton Place, Victoria standing in the crowd, which had assembled. He frequently shouted, effectively to the speaker and clapped his hands for prolonged periods. After a few minutes silence on his part, he stretched his arms towards the Fascists, who were standing immediately in front of him, and said the “The bloody vermin have come out of their holes.” I then cautioned him that such language was likely to provoke a breach of the peace and if repeated he would be arrested. He ignored the caution. Between 7-50 pm. and 8-5 p.m. I heard him shout to the Fascists:- “The rats have come out of their holes”, “Dirty bloody swines” and many other similar expressions. I cautioned Stott three times and finally at 8-5pm, when he said to a Fascist:- “You are a bloody fool.” I arrested him. P.C.364 “C” William Wilds, attached to Tottenham Court Road Station, came to my assistance. The prisoner did not resist arrest, but as we [were] leading him out of the crowd, he sprang forward and gave a female Fascist, who was hurrying out of our way, a violent push in the back, with his clenched hands, which were resting on his chest. The assault sent the woman staggering heavily against other members of the crowd and she recovered her balance with difficulty. She made no complaint and hurried away.

Immediately after the assault, the prisoner turned to me and said:- “Steady on, there is no need for you to push me like that.” He had not been pushed by anyone. It was a deliberate and premeditated assault. I took the prisoner to Albany Street Police Station and charged him with using insulting words and behaviour whereby a breach of the peace may have been occasioned. When the charge was read over to him, he said- “I got twenty candidates for the Young Communist League during the last week. Not too bad, is it?”.