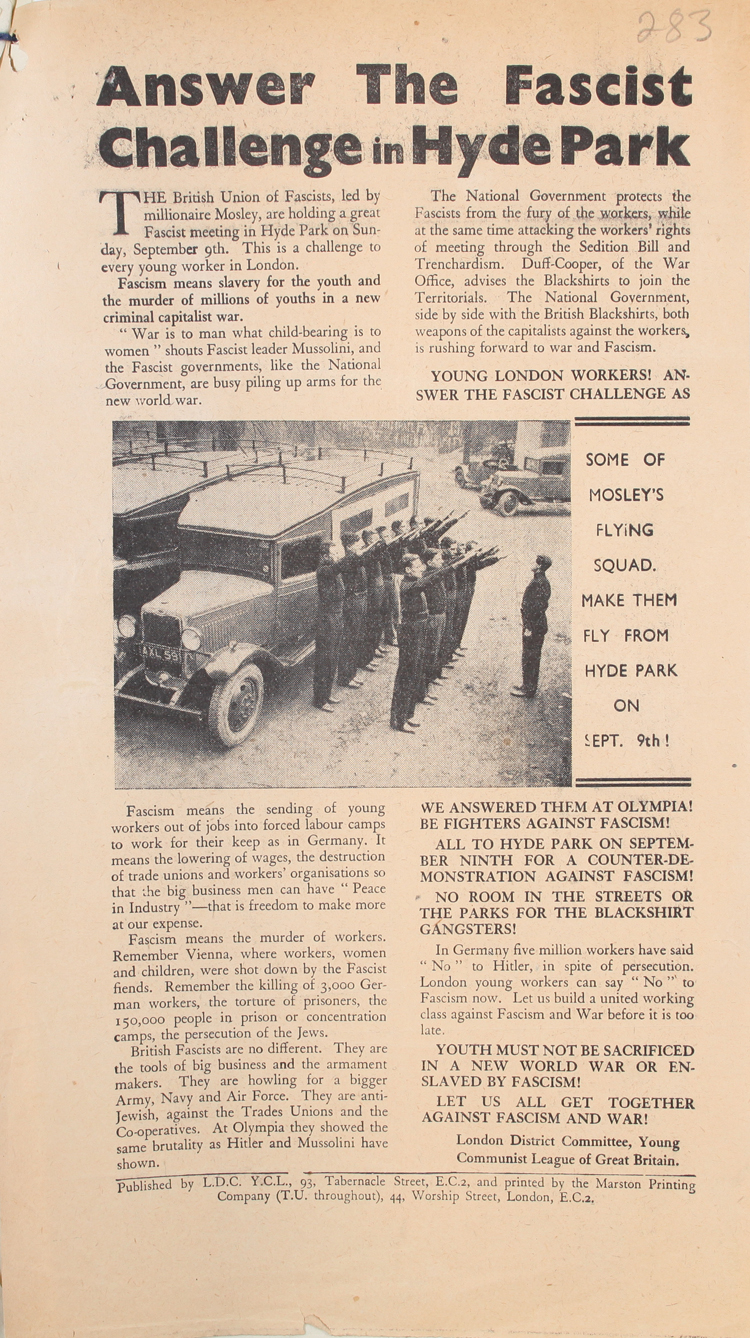 The British Union of Fascists led by millionaire Mosley, are holding a great Fascist meeting in Hyde Park, on Sunday September 9th. This is a challenge to every young worker in London.

Fascism means slavery for the youth and the murder of millions of youths in a new criminal capitalist war.

“War is to man what child-bearing is to women” shouts Fascist Mussolini, and the Fascist governments, like the National Government, are busy piling up arms for the new world war.

Fascism means the sending of young workers out of jobs into forced labour camps to work for their keep as in Germany. It means the lowering of wages, the destruction of trade unions and worker’s organisations so that big business men can have “Peace in Industry” – that is freedom to make more at our expense.

Fascism means the murder of workers. Remember Vienna, where workers, women and children, were shot down by Fascist fiends. Remember the killing of 3,000 German workers, the torture of prisoners, the 150,000 people in prison or concentration camps, the persecution of the Jews.

British Fascists are no different. They are the tools of big business and the armament makers. They are howling for a bigger Army, Navy and Air Force. They are anti-Jewish against the Trades Unions and Co-operatives. At Olympia they showed the same brutality as Hitler and Mussolini have shown.

The National Government protects the Fascists from the fury of the workers, while at the same time attacking the workers’ rights of meeting through the Sedition Bill and Trenchardism. Duff-Cooper, of the War Office advises the Blackshirts to join the Territorials. The National Government, side by side with the British Blackshirts, both weapons of the Capitalists against the workers, is rushing forward to war and Fascism.

Photograph with caption: Some of Mosley’s Flying Squad. Make them fly from Hyde Park on Sept. 9th!

YOUNG LONDON WORKERS! ANSWER THE FASCIST CHALLENGE AS WE ANSWERED THEM AT OLYMPIA! BE FIGHTERS AGAINST FASCISM!

ALL TO HYDE PARK ON SEPTEMBER NINTH FOR A COUNTER DEMONSTRATION AGAINST FASCISM!

NO ROOM IN THE STREETS OR THE PARKS FOR THE BLACKSHIRT GANGSTERS!

In Germany five million workers have said “No” to Hitler in spite of persecution. London young workers can say “No” to Fascism now. Let us build a united working class against Fascism and War before it is too late.

YOUTH MUST NOT BE SACRIFICED IN A NEW WORLD WAR OR ENSLAVED BY FASCISM! LET US ALL GET TOGETHER AGAINST FASCISM AND WAR!