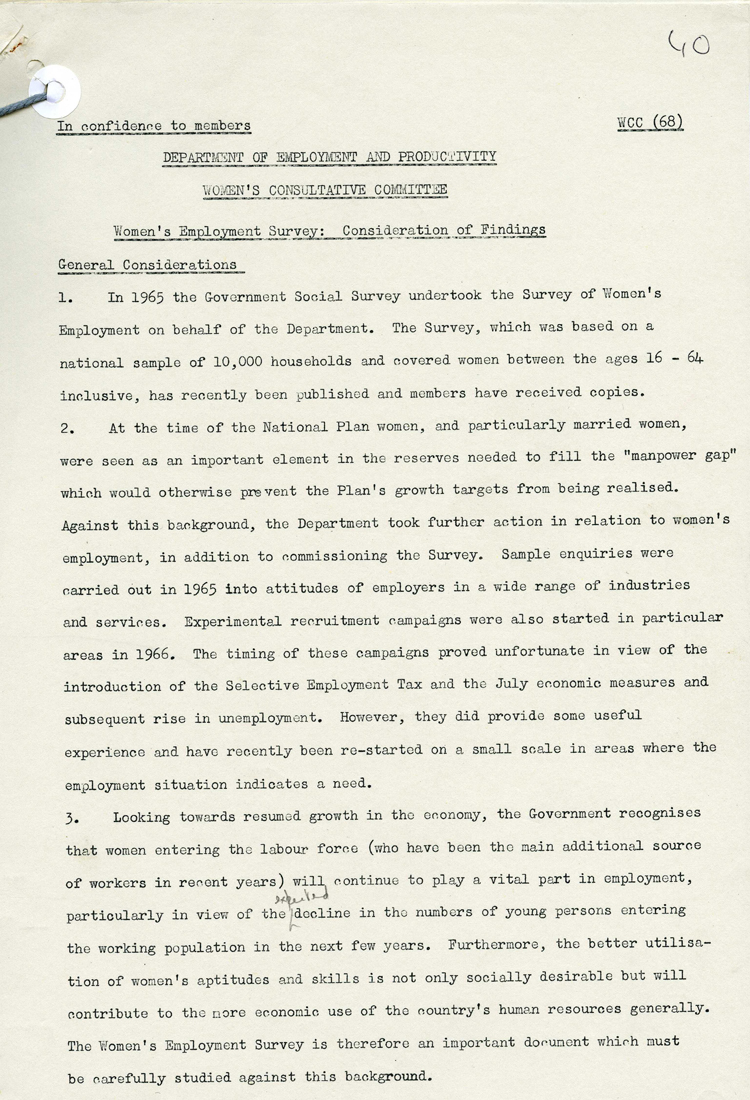 In confidence to members

1. In 1965 the Government Social Survey undertook the Survey of Women’s Employment on behalf of the Department. The Survey, which was based on a national sample of 10,000 households and covered women between the ages 16 – 64 inclusive, has recently been published and members have received copies.

2. At the time of the National Plan women, and particularly married women, were seen as an important element in the reserves needed to fill the “manpower gap” which would otherwise prevent the Plan’s growth targets from being realised. Against this background, the Department took further action in relation to women’s employment, in addition to commissioning the Survey. Sample enquiries were carried out in 1965 into attitudes of employers in a wide range of industries and services. Experimental recruitment campaigns were also started in particular areas in 1966. The timing of these campaigns proved unfortunate in view of the introduction of the Selective Employment Tax and the July economic measures and subsequent rise in unemployment. However, they did provide some useful experience and have recently been re-started on a small scale in areas where the employment situation indicates a need.

3. Looking towards resumed growth in the economy, the Government recognises that women entering the labour force (who have been the main additional source of workers in recent years) will continue to play a vital part in employment, particularly in view of the expected decline in the numbers of young persons entering the working population in the next few years. Furthermore, the better utilisation of women’s aptitudes and skills is not only socially desirable but will contribute to the more economic use of the country’s human resources generally. The Women’s Employment Survey is therefore an important document which must be carefully studied against this background.