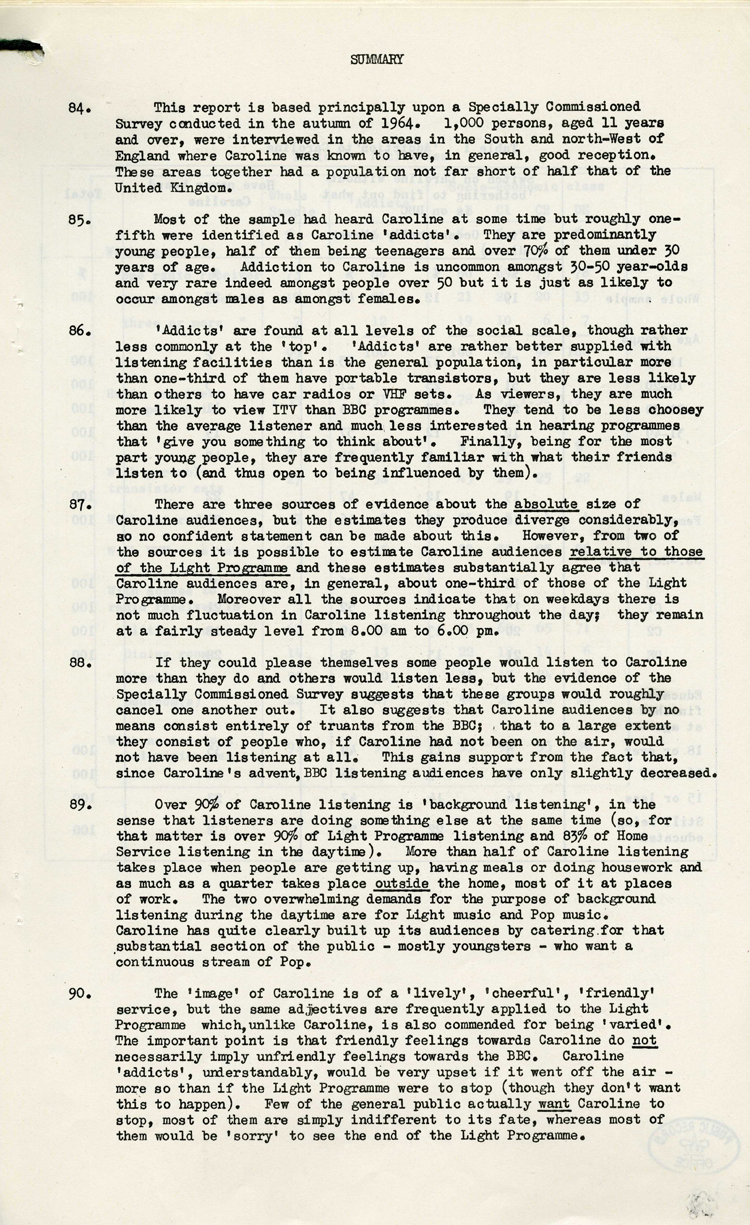 84. This report is based principally upon a Specially Commissioned Survey conducted in the autumn of 1964. 1,000 persons, aged 11 years and over, were interviewed in the areas in the South and north-West of England where Caroline was known to have, in general, good reception. These areas together had a population not far short of half that of the United Kingdom.

85. Most of the sample had heard Caroline at some time but roughly one-fifth were identified as Caroline ‘addicts’. They are predominantly young people, half of them being teenagers and over 70% of them under 30 years of age. Addiction to Caroline is uncommon amongst 30-50 year-olds and very rare indeed amongst people over 50 but it is just as likely to occur amongst males as amongst females.

86. ‘Addicts’ are found at all levels of the social scale, though rather less commonly at the ‘top’. ‘Addicts’ are rather better supplied with listening facilities than is the general population, in particular more than one-third of them have portable transistors, but they are less likely than others to have car radios or VHF sets. As viewers, they are much more likely to view ITV than BBC programmes. They tend to be less choosey than the average listener and much less interested in hearing programmes that ‘give you something to think about’. Finally being for the most part young people, they are frequently familiar with what their friends listen to (and thus open to being influenced by them).

87. There are three sources of evidence about the absolute size of Caroline audiences, but the estimates they produce diverge considerably, so no confident statement can be made about this. However, from two of the sources it is possible to estimate Caroline audiences relative to those of the Light Programme and these estimates substantially agree that Caroline audiences are, in general, about one-third of those of the Light Programme. Moreover all the sources indicate that on weekdays there is not much fluctuation in Caroline listening throughout the day; they remain at a fairly steady level from 8.00 am to 6.00 pm.

88. If they could please themselves some people would listen to Caroline more than they do and others would listen less, but the evidence of the Specially Commissioned Survey suggests that these groups would roughly cancel one another out. It also suggests that Caroline audiences by no means consist entirely of truants from the BBC; that to a large extent they consist of people who, if Caroline had not been on the air, would not have been listening at all. This gains support from the fact that, since Caroline’s advent, BBC listening audiences have only slightly decreased.

89. Over 90% of Caroline listening is ‘background listening’, in the sense that listeners are doing something else at the same time (so, for that matter is over 90% of Light Programme listening and 83% of Home Service listening in the daytime). More than half of Caroline listening takes place when people are getting up, having meals or doing housework and as much as a quarter takes place outside the home, most of it at places of work. The two overwhelming demands for the purpose of background listening during the daytime are for Light music and Pop music. Caroline has quite clearly built up its audiences by catering for that substantial section of the public – mostly youngsters – who want a continuous stream of Pop.

90. The ‘image’ of Caroline is of a ‘lively’, ‘cheerful’, ‘friendly’ service, but the same adjectives are frequently applied to the Light Programme which, unlike Caroline, is also commended for being ‘varied’. The important point is that friendly feelings towards Caroline do not necessarily imply unfriendly feelings towards the BBC. Caroline ‘addicts’, understandably, would be very upset if it went off the air – more so than if the Light Programme were to stop (though they don’t want this to happen). Few of the general public want Caroline to stop, most of them are simply indifferent to its fate, whereas most of them would be ‘sorry’ to see the end of the Light Programme.