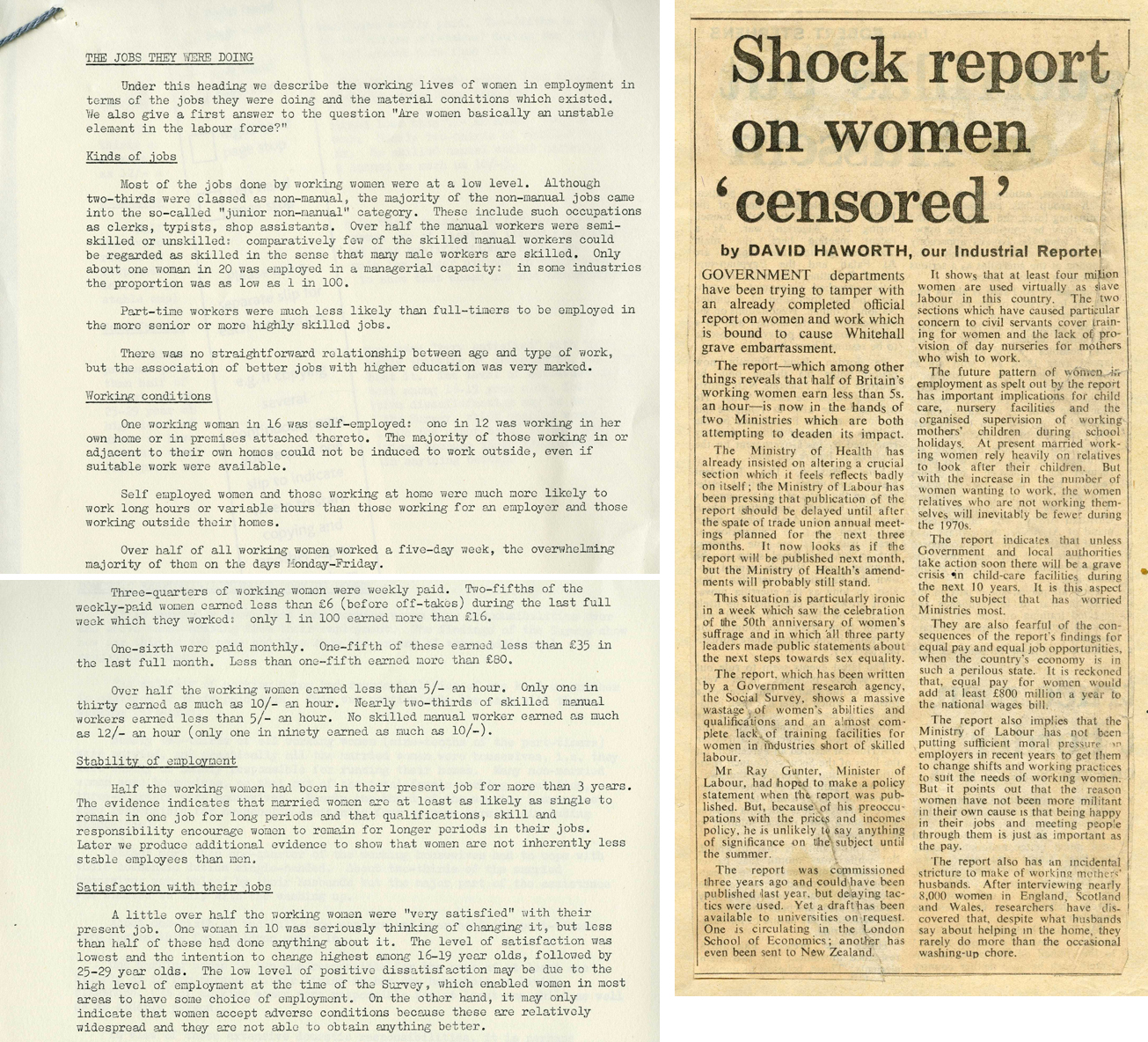 Extract from Women’s Employment Survey and an article from the Observer responding to a leak of its findings, 31st March 1968 (LAB 8/3369). The Observer ©

THE JOBS THEY WERE DOING
Under this heading we describe the working lives of women in employment in terms of the jobs they were doing and the material conditions which existed. We also give a first answer to the question “Are women basically an unstable element in the labour force?”

Most of the jobs done by working women were at a low level. Although two-thirds were classed as non-manual, the majority of the non-manual jobs came into the so-called “junior non-manual” category. These include such occupations as clerks, typists, shop assistants. Over half the manual workers were semiskilled or unskilled: comparatively few of the skilled manual workers could be regarded as skilled in the sense that many male workers are skilled. Only about one woman in 20 was employed in a managerial capacity: in some industries the proportion was as low as 1 in 100.

Part-time workers were much less likely than full-timers to be employed in the more senior or more highly skilled jobs.

There was no straightforward relationship between age and type of work, but the association of better jobs with higher education was very marked.

One working woman in 16 was self-employed: one in 12 was working in her own home or in premises attached thereto. The majority of those working in or adjacent to their own homes could not be induced to work outside, even if suitable work were available.

Over half of all working women worked a five-day week, the overwhelming majority of them on the days Monday-Friday.

Three-quarters of working women were weekly paid. Two-fifths of the weekly-paid women earned less than £6 (before off-takes) during the last full week which they worked: only 1 in 100 earned more than £16.

One-sixth were paid monthly. One-fifth of these earned less than £35 in the last full month. Less than one-fifth earned more than £80.

Half the working women had been in their present job for more than 3 years. The evidence indicates that married women are at least as likely as single to remain in one job for long periods and that qualifications, skill and responsibility encourage women to remain for longer periods in their jobs. Later we produce additional evidence to show that women are not inherently less stable employees than men.

Satisfaction with their jobs

A little over half the working women were “very satisfied” with their present job. One woman in 10 was seriously thinking of changing it, but less than half of these had done anything about it. The level of satisfaction was lowest and the intention to change highest among 16-19 year olds, followed by 25-29 year olds. The low level of positive dissatisfaction may be due to the high level of employment at the time of the Survey, which enabled women in most areas to have some choice of employment. On the other hand, it may only indicate that women accept adverse conditions because these are relatively widespread and they are not able to obtain anything better.

By David Haworth, our Industrial Reporter

Government departments have been trying to tamper with an already completed official report on women and work which is bound to cause Whitehall grave embarrassment.

The report – which among other things reveals that half of Britain’s working women earn less than 5s [shillings] an hour – is now in hands of two Ministries which are both attempting to deaden its impact.

This situation is particularly ironic in a week which saw the celebration of the 50th anniversary of women’s suffrage and in which all three party leaders made public statements about the next steps towards sex equality.

The report which has been written by a Government research agency, the Social Survey, shows a massive wastage of women’s abilities and qualifications and an almost complete lack of training facilities for women in industries short of skilled labour.

Mr. Ray Gunter, Minister of Labour, had hoped to make a policy statement when the report was published. But, because of his preoccupations with the prices and incomes policy, he is unlikely to say anything of significance on the subject until the summer.

The report was commissioned three years ago and could have been published last year, but delaying tactics were used. Yet a draft has been available to universities on request. One is circulating in the London School of Economics, another has even been sent to New Zealand.

It shows that a least four million women are used virtually as slave labour in this country. The two sections which have caused particular concern to civil servants cover training for women and the lack of provision of day nurseries for mothers who wish to work.

The future pattern of women in employment as spelt out by the report has important implications for childcare, nursery facilities and the organised supervision of working mothers’ children during school holidays. At present married working women rely heavily on relatives to look after their children. But with the increase in the number of women wanting to work, the women relatives who are not working themselves will inevitably be fewer during the 1970s.

The report indicates that unless Government and local authorities take action soon there will be a grave crisis in child-care facilities during the next 10 years. It is this aspect of the subject that has worried Ministries most.

They are also fearful of the consequences of the report’s findings for equal pay and equal job opportunities when the country’s economy is in such a perilous state. It is reckoned that, equal pay for women would add at least £800 million a year to the national wages bill.

The report also implies that the Ministry of Labour has not been putting sufficient moral pressure on employers in recent years to get them to change shifts and working practices to suit the needs of working women. But it points out the reason women have not been more militant in their own cause is that being happy in their jobs and meeting people through them is just as important as the pay.

The report also has an incidental stricture to make of working mothers’ husbands. After interviewing nearly 8,000 women in England, Scotland and Wales, researchers have discovered that, despite what husbands say about helping in the home, they rarely do more than the occasional washing-up chore.