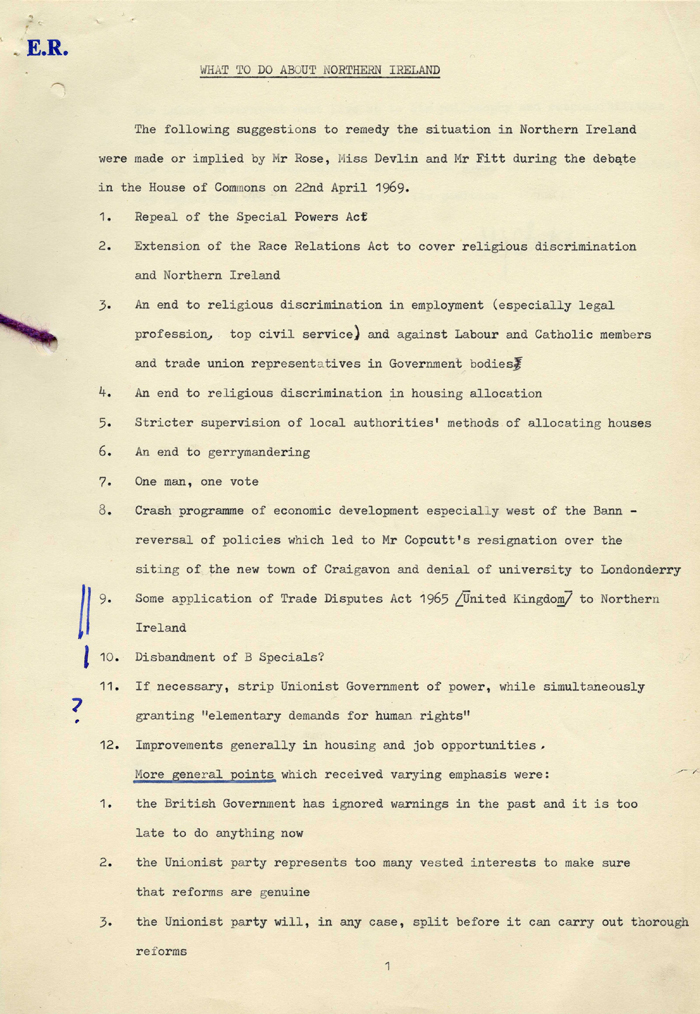 WHAT TO DO ABOUT NORTHERN IRELAND

The following suggestions to remedy the situation in Northern Ireland were made or implied by Mr Rose, Miss Devlin and Mr Fitt during the debate in the House of Commons on 22nd April 1969.

1. Repeal of the Special Powers Act
2. Extension of the Race Relations Act to cover religious discrimination and Northern Ireland
3. An end to religious discrimination in employment (especially legal profession, top civil service) and against Labour and Catholic members and trade union representatives in Government bodies.
4. An end to religious discrimination in housing allocation
5. Stricter supervision of local authorities methods of allocating houses
6. An end to gerrymandering.
7. One man, one vote
8. Crash programme of economic development especially west of the Bann – reversal of policies which led to Mr Copcutt’s resignation over the siting of the new town of Craigavon and denial of university to Londonderry.
9. Some application of Trade Disputes Act 1965 [United Kingdom] to Northern Ireland
10. Disbandment of B Specials?
11. If necessary, strip Unionist Government of power, while simultaneously granting “elementary demands for human rights
12. Improvements generally in housing and job opportunities.

1. the British Government has ignored warnings in the past and it is too late to do anything now
2. the Unionist party represents too many vested interests to make sure that reforms sure genuine
3. the Unionist party will in any case split before it can carry out thorough reforms