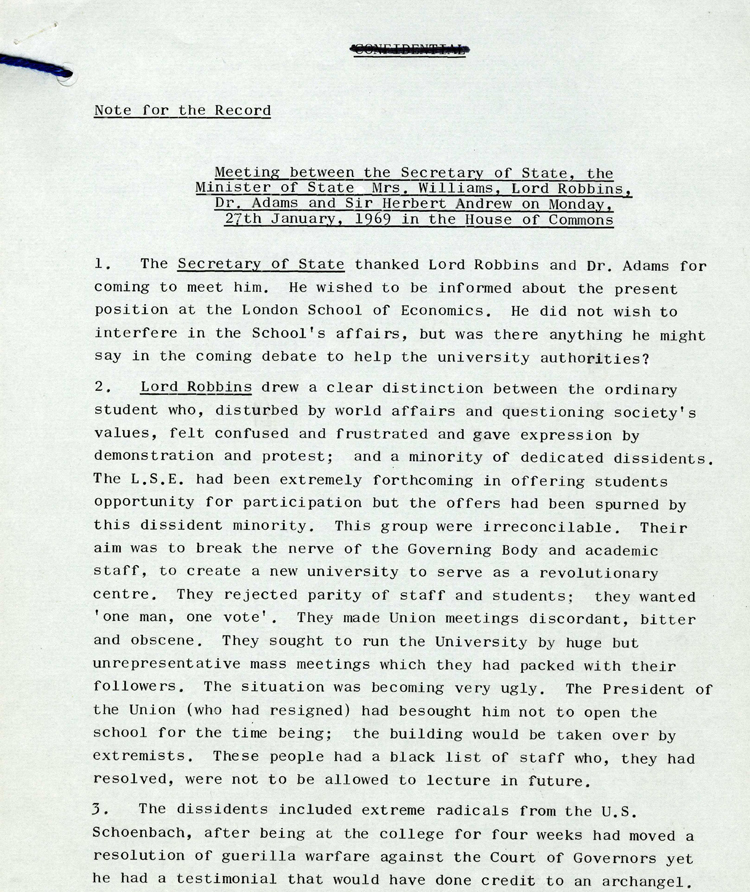 Note for the Record

Meeting between the Secretary of State, the Minister of State Mrs, Williams, Lord Robbins, Dr. Adams and Sir Herbert Andrew on Monday, 27th January, 1969 in the House of Commons

1. The Secretary of State thanked Lord Robbins and Dr. Adams for coming to meet him. He wished to be informed about the present position at the London School of Economics. He did not wish to interfere in the School’s affairs, but was there anything he might say in the coming debate to help the university authorities?

2. Lord Robbins drew a clear distinction between the ordinary student who, disturbed by world affairs and questioning society’s values, felt confused and frustrated and gave expression by demonstration and protest; and a minority of dedicated dissidents. The L.S.E. had been extremely forthcoming in offering students opportunity for participation but the offers had been spurned by this dissident minority. This group were irreconcilable. Their aim was to break the nerve of the Governing Body and academic staff, to create a new university to serve as a revolutionary centre. They rejected parity of staff and students; they wanted ‘one man, one vote’. They made Union meetings discordant, bitter and obscene. They sought to run the University by huge but unrepresentative mass meetings which they had packed with their followers. The situation was becoming very ugly. The President of the Union (who had resigned) had besought him not to open the school for the time being; the building would be taken over by extremists. These people had a black list of staff who, they had resolved, were not to be allowed to lecture in future.

3. The dissidents included extreme radicals from the U.S. Schoenbach, after being at the college for four weeks, had moved a resolution of guerilla warfare against the Court of Governors yet he had a testimonial that would have done credit to an archangel.