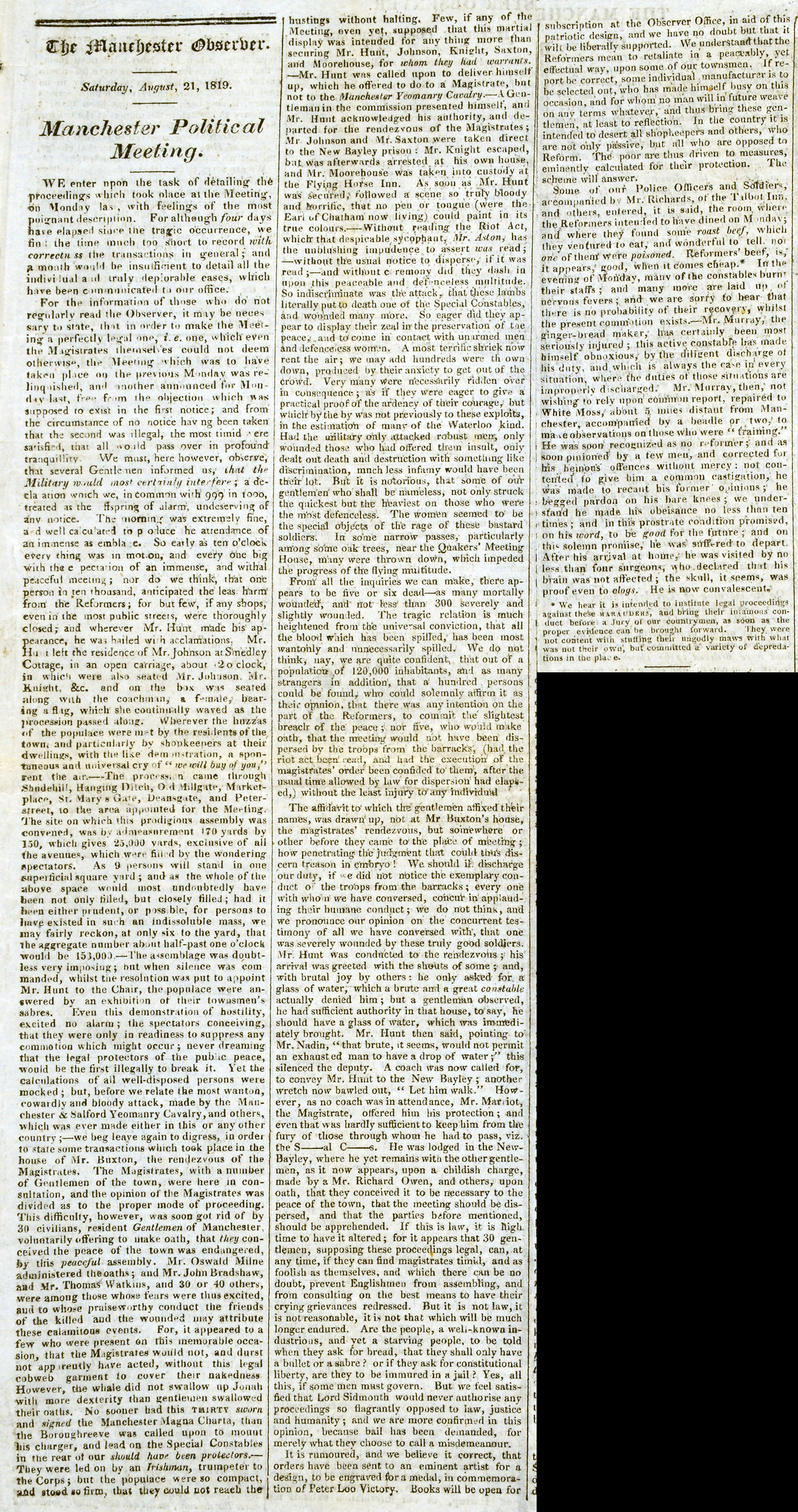 We enter upon the task of detailing the proceedings which took place at the Meeting on Monday last, with feelings of the most pregnant description. For although four days have elapsed since the tragic occurrence, we find the time much too short to record with correctness the transactions in general; and a month would be insufficient to detail all the individual and truly deplorable cases, which have been communicated to our office.

From all the inquiries we can make, there appears to be five or six dead—as many mortally wounded, and not less than 300 severely and slightly wounded. The tragic relation is much heightened from the universal conviction, that all the blood which has been spilled, has been most wantonly and unnecessarily spilled.  We do not think, nay, we are quite confident, that out of a population of 120,000 inhabitants, and as many strangers, in addition, that a hundred persons could be found, who could solemnly affirm it as their opinion, that there was any intention on the part of the Reformers, to commit the slightest breach of the peace; nor five, who would make oath, that the meeting would not have been dispersed by the troops from the barracks, (had the riot act been read, and had the execution of the magistrates’ order been confided to them, after the usual time allowed by law for dispersion had elapsed,) without the least injury to any individual.

The affidavit to which the gentlemen affixed their names, was drawn up, not at Mr Buxton’s house, the magistrates’ rendezvous, but somewhere or other before they came to the place of meeting; how penetrating the judgement that could thus discern treason in embryo! We should ill discharge our duty, if we did not notice the exemplary conduct of the troops from the barracks; every one with whom we have conversed, concur in applauding their humane conduct; we do not think, and we pronounce our opinion on the concurrent testimony of all we have conversed with, that one was severely wounded by these truly good soldiers. Mr Hunt was conducted to the rendezvous; his arrival was greeted with the shouts of some, and with brutal joy by others; he only asked for a glass of water, which a brute and a great constable actually denied him; but a gentleman observed, he had sufficient authority in that house, to say, he should have a glass of water; which was immediately brought. Mr Hunt then said, pointing to Mr Nadin, ‘that brute, it seems, would not permit an exhausted man to have a drop of water;’ this silenced the deputy. A coach was now called for, to convey Mr Hunt to the New Bayley; another wretch now bawled out, ‘Let him walk.’ However, as no coach was in attendance, Mr Marriot, the Magistrate, offered him his protection; and even that was hardly sufficient to keep him from the fury of those through whom he passed, viz, the S—l C—s. He was lodged in the New Bayley, where he yet remains with the other gentlemen, as it now appears, upon a childish charge, made by a Mr Richard Owen, and others, upon oath, that they conceived it to be necessary to the peace of the town, that the meeting should be dispersed, and that the parties before mentioned, should be apprehended. If this is law, it is high time to have it altered; for it appears that 30 gentlemen, supposing these proceedings legal, can, at any time, if they find the magistrates timid, and as foolish as themselves, and which there can be no doubt, prevent Englishmen from assembling, and consulting on the best means to have their crying grievances redressed. But it is not law, it is not reasonable, it is not that which will be much longer endured. Are the people, a well-known industrious, and yet a starving people, to be told when they ask for bread, that they shall only have a bullet or a sabre? or if they ask for constitutional liberty, are they to be immured in a gaol? Yes, all this, if some men must govern. But we feel satisfied that Lord Sidmouth would never authorise any proceedings so flagrantly opposed to law, justice, and humanity; and we are more confirmed in this opinion, because bail has been demanded, for merely what they choose to call a misdemeanour.

It is rumoured, and we believe it correct, that orders have been sent to an eminent artist, for a design, to be engraved for a medal, in commemoration of Peter Loo Victory. Books will be opened for subscription at the Observer Office, in aid of this patriotic design, and we have no doubt but that it will be liberally supported. We understand that the Reformers mean to retaliate in a peaceably, yet effectual way, upon some of our townsmen.  If reports be correct, some individual manufacturer is to be selected out, who has made himself busy on this occasion, and for whom no man will in future weave on any terms whatever, and thus bring these gentlemen, at least to reflection.  In the country it is intended to desert all shopkeepers and others, who are not only passive, but all who are opposed to Reform.  The poor are thus driven to measures, eminently calculated for their protection.  The scheme will answer.

Some of our Police Officers and Soldiers, accompanied by Mr. Richards, of the Talbot Inn, and others, entered, it is said, the room where the Reformers intended to have dined on Monday; and where they found some roast beef, which they ventured to eat, and wonderful to tell not one of them were poisoned.  Reformers’ beef, is, it appears, good, when it comes cheap.* In the evening of Monday, many of the constables burnt their staffs; and many more are laid up of nervous fevers; and we are sorry to hear that there is no probability of their recovery, whilst the present commotion exists.—Mr. Murray, the ginger-bread maker, has certainly been most seriously injured; this active constable has made himself obnoxious, by the diligent discharge of his duty, and which is always the case in every situation, where the duties of those situations are improperly discharged.  Mr. Murray, then, not wishing to rely upon common report, repaired to White Moss, about 5 miles distant from Manchester, accompanied by a beadle or two, to make observations on those who were ‘training.’ He was soon recognized as no reformer; and as soon pinioned by a few men and corrected for his heinous offences without mercy; not contented to give him a common castigation, he was made to recant his former opinions; he begged pardon on his bare knees; we understand he made his obeisance no less than ten times; and in this prostrate condition promised, on his word, to be good for the future; and on this solemn promise, he was suffered to depart.  After his arrival at home, he was visited by no less than four surgeons, who declared that his brain was not affected; the skull, it seems, was proof even to clogs.  He is now convalescent.

* We hear it is intended to institute legal proceedings against these MARAUDERS, and bring their infamous conduct before a jury of our countrymen as soon as the proper evidence can be brought forward. They were not content with stoning their ungodly maws with what was not their own, but committed a variety of depredations in the place.