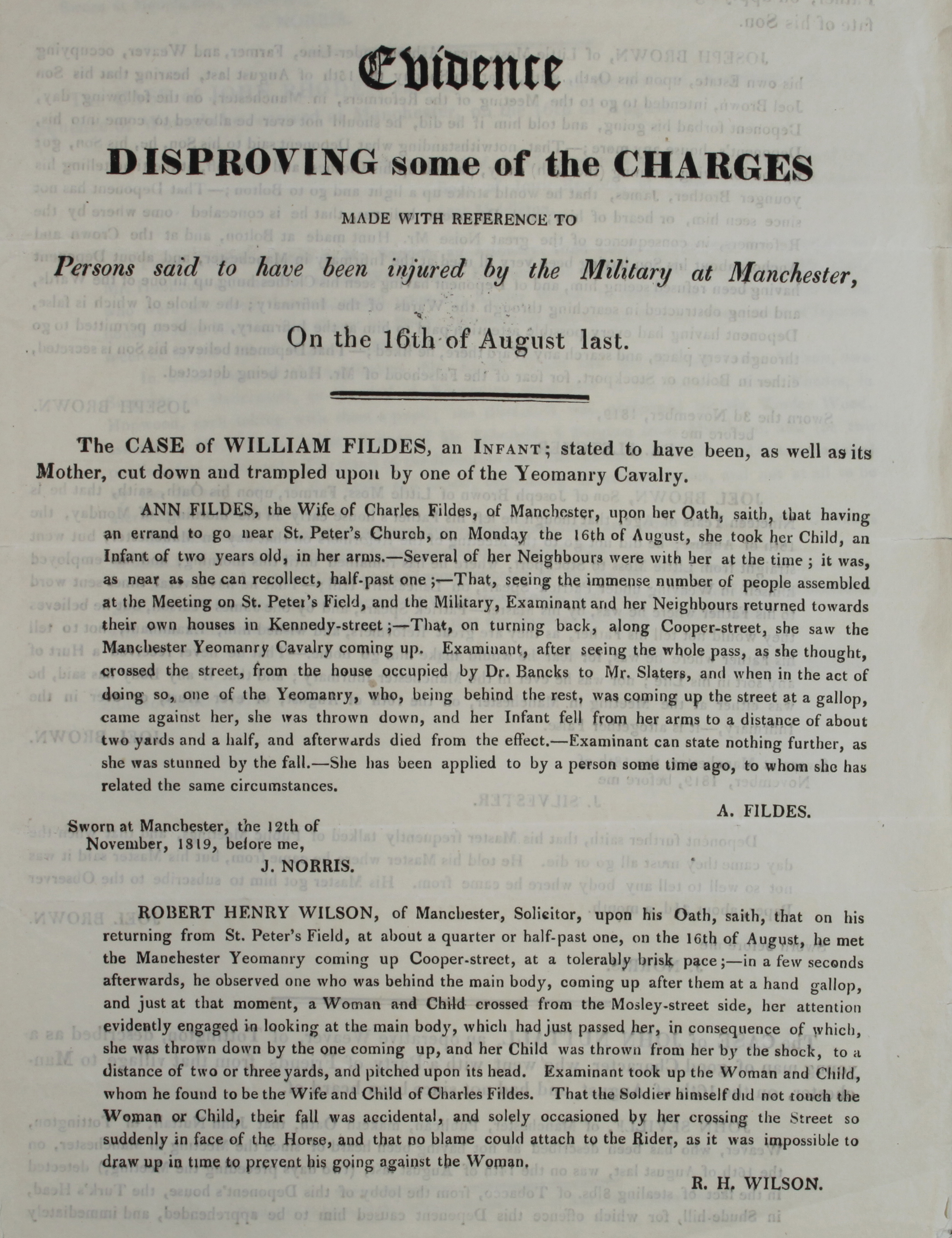 Extract from a printed paper called ‘Evidence disproving some of the charges’: an attempt to explain away the death of a child called William Fildes at Peterloo. This was a move by the authorities to justify their actions, and provide a summary of the various inquests carried out by the Manchester authorities. They were happy to admit that a child was trampled to death in the Yeomanry charge, and blame the mother for letting go of her child when startled by the charge.

EVIDENCE
DISPROVING some of the CHARGES
MADE REFERENCE TO

Persons said to have been injured by the Military at Manchester,

On the 16th of August last.

The CASE of WILLIAM FILDES, an Infant; stated to have been as well as its Mother, cut down and trampled upon by one of the Yeomanry Cavalry.

ANN FILDES, the Wife of Charles Fildes, of Manchester, upon her Oath, saith, that having an errand to go near St. Peter’s Church, on Monday the 16th of August, she took her Child, an Infant of two years old, in her arms.-Several of her neighbours were with her at the time; it was, as near as she can recollect, half-past one; – That, seeing the immense number of people assembled at the Meeting on St. Peter’s Field, and the Military, Examinant and her Neighbours returned towards their own houses in Kennedy Street; – That, on turning back, along Cooper Street, she saw the Manchester Yeomanry Cavalry coming up. Examinant, after seeing the whole pass, as she thought, crossed the street, from the house occupied by Dr Bancks to Mr Slaters, and when in the act of doing so, one of the Yeomanry, who being behind the rest, was coming up the street at a gallop, came against her, she was thrown down, and her Infant fell from her arms to a distance of about two yards and a half, and afterwards died from the effect.- Examinant can state nothing further, as she was stunned by the fall-. She has been applied to by a person some time ago, to whom she has related the circumstances.

ROBERT HENRY WILSON, of Manchester, Solicitor, upon his Oath, saith, that on his returning from St. Peter’s Field, at about a quarter or half-past one, on the 16th of August, he met the Manchester Yeomanry coming up Cooper Street, at a tolerably brisk pace; – in a few seconds afterwards, he observed one who was behind the main body, coming up after them at a hand gallop, and just at that moment, a Woman and Child crossed from the Mosely Street side, her attention evidently engaged in looking at the main body, which just passed her, in consequence of which, she was thrown down by the one coming up, and her child thrown from her by the shock, to a distance of two or three yards, and pitched upon its head. Examinant took up the Woman and the Child, whom he found to be the Wife and Child of Charles Fildes. That the Soldier himself did not touch the Woman or the Child, their fall was accidental, and solely occasioned by her crossing the Street so suddenly in the face of the Horse, and that no blame could attach to the Rider, as it was impossible to draw up in time to prevent his going against the Woman.