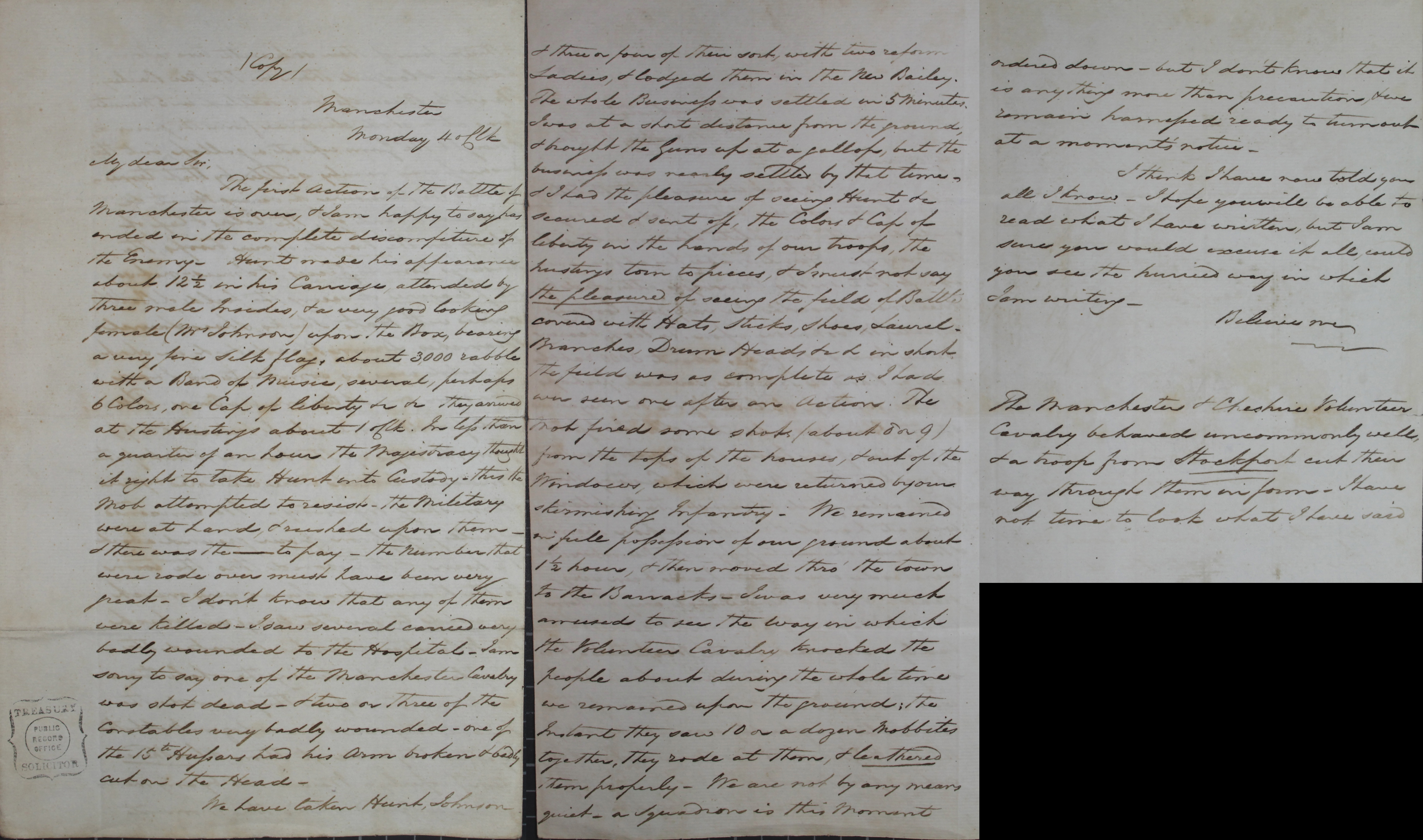 Account of events at St Peter’s Field by Major Dyneley, 16 August 1819. Dyneley was a Major with the regular Hussars, in charge of two cannons.

The first action of the Battle of Manchester is over, and has I am happy to say ended in the complete discomfiture of the Enemy. Hunt made his appearance about 12½ in his Carriage, accompanied by three male Insides, and a very good looking female (Mrs. Johnson) upon the Box, bearing a very fine silk flag, about 3,000 rabble with a Band of Music, several, perhaps 6 Colors, one Cap of liberty, &c. &c. They arrived at the Hustings about 1 o’ clock. In less than a quarter of an hour the Magistracy thought it right to take Hunt into Custody – this the Mob attempted to resist – the Military were at hand & rushed upon them – & there was the —— to pay. The number that were rode over might have been very great. I don’t know that any of them were killed. I saw several carried very badly wounded to the Hospital. I am sorry to say one of the Manchester Cavalry was shot dead, & two or three of the Constables very badly wounded. One of the 15th Hussars had his arm broken & badly cut on the Head.

We have taken Hunt, Johnson, & three or four of their sort, with two reform Ladies, & lodged them in the New Bailey. The whole Business was settled in 5 minutes. I was at a short distance from the ground, & brought the Guns up at a gallop, but the business was nearly settled by that time, & I had the pleasure of seeing Hunt etc secured & sent off, the Colors & Cap of liberty in the hands of our troops, the hustings torn to pieces, & I must not say the pleasure of seeing the field of Battle covered with Hats, Sticks, Shoes, Laurel Branches, Drum Heads &c &c in short the field was as complete as I had ever seen one after an action. The mob fired some shots (about 8 or 9) from the tops of the houses, & out of the Windows, which were returned by our skirmishing Infantry. We remained in full possession of our ground about 1½ hours, & then moved thro’ the town to the Barracks. I was very much amused to see the way in which the Volunteer Cavalry knocked the people about during the whole time we remained upon the ground; the Instant they saw 10 or a dozen mobbites together, they rode at them, & leathered them properly. We are not by any means quiet – a Squadron is this moment ordered down, but I don’t know that it is anything more than precautions, and we remain harnessed ready to turn out at a moment’s notice.

I think I have now told you all I know. I hope you are able to read what I have written, but I am sure you would excuse it all, could you see the hurried way on which I am writing.

The Manchester & Satisfied Volunteer Yeomanry Cavalry behaved uncommonly well, & a troop from Stockport cut their way through them in form. I have not time to look what I have said.