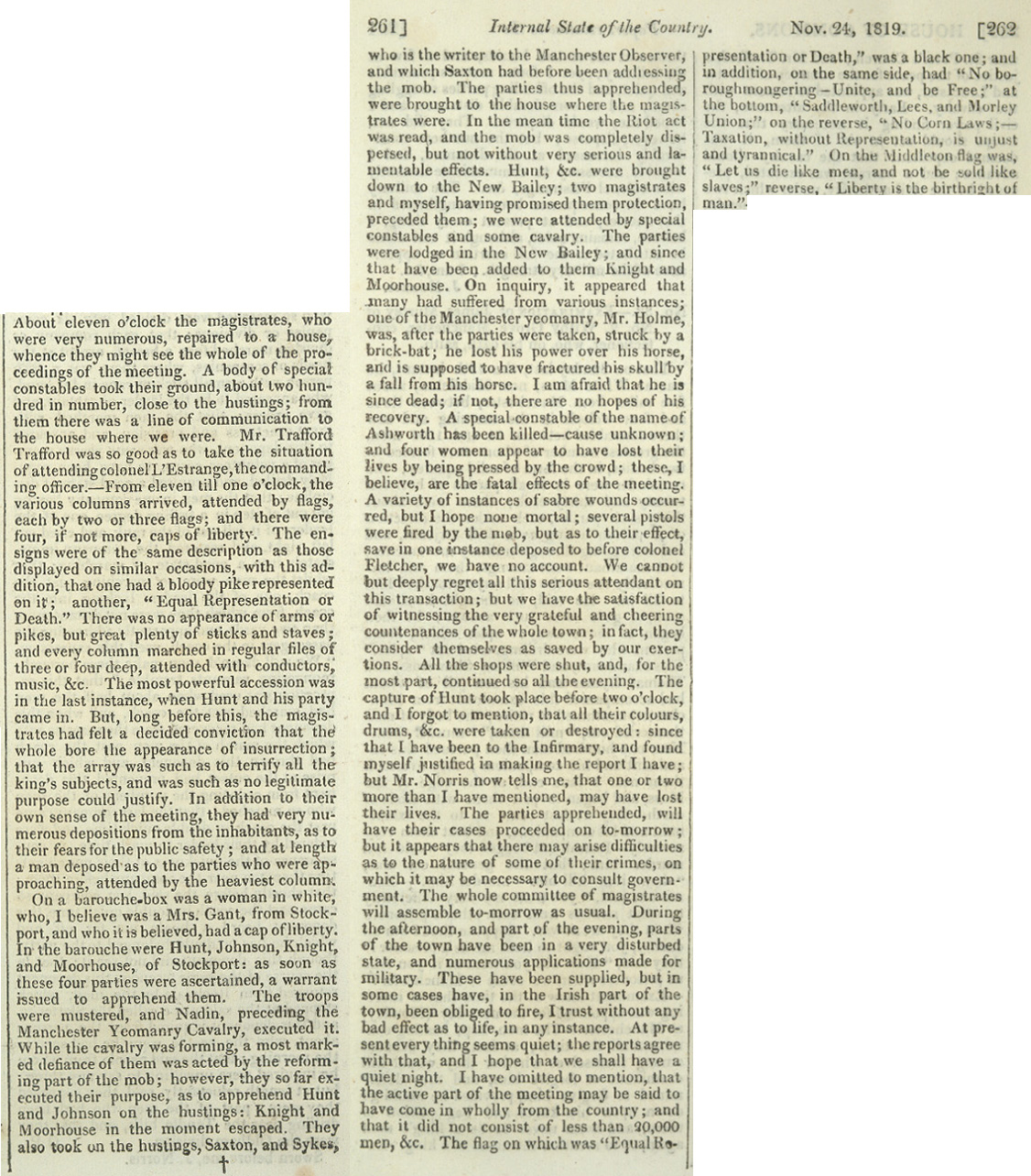 About eleven o’clock the magistrates, who were very numerous, repaired to a house, whence they might see the whole of the proceedings of the meeting. A body of special constables took their ground, about two hundred in number, close to the hustings; from them there was a line of communication to the house where we were. Mr. Trafford was so good as to take the situation of attending colonel L’Estrange, the commanding officer. – From eleven till one o’clock, the various columns arrived, attended by flags, each by two or three flags; and there were four, if not more, caps of liberty. The ensigns were of the same description as those displayed on similar occasions, with this addition, that one had a bloody pike represented on it; another, “Equal Representation or Death.” There was no appearance of arms or pikes, but great plenty of sticks and staves; and every column marched in regular files of three or four deep, attended with conductors, music, &c. The most powerful accession was in the last instance, when Hunt and his party came in.

But, long before this, the magistrates had felt a decided conviction that the whole bore the appearance of insurrection; that the array was such as to terrify all the king’s subjects, and was such as no legitimate purpose could justify. In addition to their own sense of the meeting, they had very numerous depositions from the inhabitants, as to their fears for the public safety; and at length a man deposed as to the parties who were approaching, attended by the heaviest columns.

On a barouche-box was a woman in white, who, I believe was a Mrs. Gant, from Stockport, and who it is believed, had a cap of liberty. In the barouche were Hunt, Johnson, Knight, and Moorhouse, of Stockport: as soon as these four parties were ascertained, a warrant issued to apprehend them. The troops were mustered, and Nadin, preceding the Manchester Yeomanry Cavalry, executed it. While the cavalry was forming, a most marked defiance of them was acted by the reforming part of the mob; however, they so far executed their purpose, as to apprehend Hunt and Johnson on the hustings: Knight and Moorhouse in the moment escaped. They also took on the hustings, Saxton, and Sykes, who is the writer to the Manchester Observer, and which Saxton had before been addressing the mob. The parties thus apprehended, were brought to the house where the magistrates were. In the meantime the Riot act was read, and the mob was completely dispersed, but not without very serious and lamentable effects. Hunt, &c. were brought down to the New Bailey; two magistrates and myself, having promised them protection, proceeded them; we were attended by special constables and some cavalry. The parties were lodged in the New Bailey; and since that have been added to them Knight and Moorhouse. On inquiry, it appeared that many suffered from various instances; one of the Manchester yeomanry, Mr. Holme, was, after the parties were taken, struck by a brick-bat; he lost his power over his horse, and is supposed to have fractured his skull by a fall from his horse. I am afraid that he is since dead; if not, there are no hopes of his recovery. A special constable of the name of Ashworth has been killed – cause unknown; and four women appear to have lost their lives by being pressed by the crowd; these, I believe, are the fatal effects of the meeting.

A variety of instances of sabre wounds occurred, but I hope none mortal; several pistols were fired by the mob, but as to their effect, save in one instance deposed to before colonel Fletcher, we have no account. We cannot but deeply regret all this serious attendant on this transaction; but we have the satisfaction of witnessing the very grateful and cheering countenances of the whole town; in fact, they consider themselves as saved by our exertions. All the shops were shut, and, for the most part continued so all evening. The capture of Hunt took place before two o’clock, and I forgot to mention, that all their colours, drums, &c. were taken or destroyed: since that I have been to the Infirmary, and found myself justified in making the report I have; but Mr. Norris now tells me, that one or two more than I have mentioned, may have lost their lives. The parties apprehended will have their cases proceeded on to-morrow; but it appears that there may arise difficulties as to the nature of some of their crimes, on which it may be necessary to consult government. The whole committee of magistrates will assemble to-morrow as usual.

During the afternoon, and part of the evening, parts of the town have been in a very disturbed state, and numerous applications made for military. These have been supplied, but in some cases have, in the Irish part of the town, been obliged to fire, I trust without any bad effect as to life, in any instance. At present everything seems quiet; the reports agree with that, and I hope that we shall have a quiet night. I have omitted to mention, that the active part of the meeting may be said to have come in wholly from the country; and that it did not consist of less than 20,000 men, &c. The flag on which was “Equal Representation or Death,” was a black one; and in addition, on the same side, had “No borough mongering – Unite, and be Free;” at the bottom, “Saddleworth, Lees, and Morley Union;” on the reverse, “No Corn Laws; – Taxation, without Representation, is unjust and tyrannical.” On the Middleton flag was, “Let us die like men, and not be sold like slaves;” reverse, “Liberty is the birth right of man.”