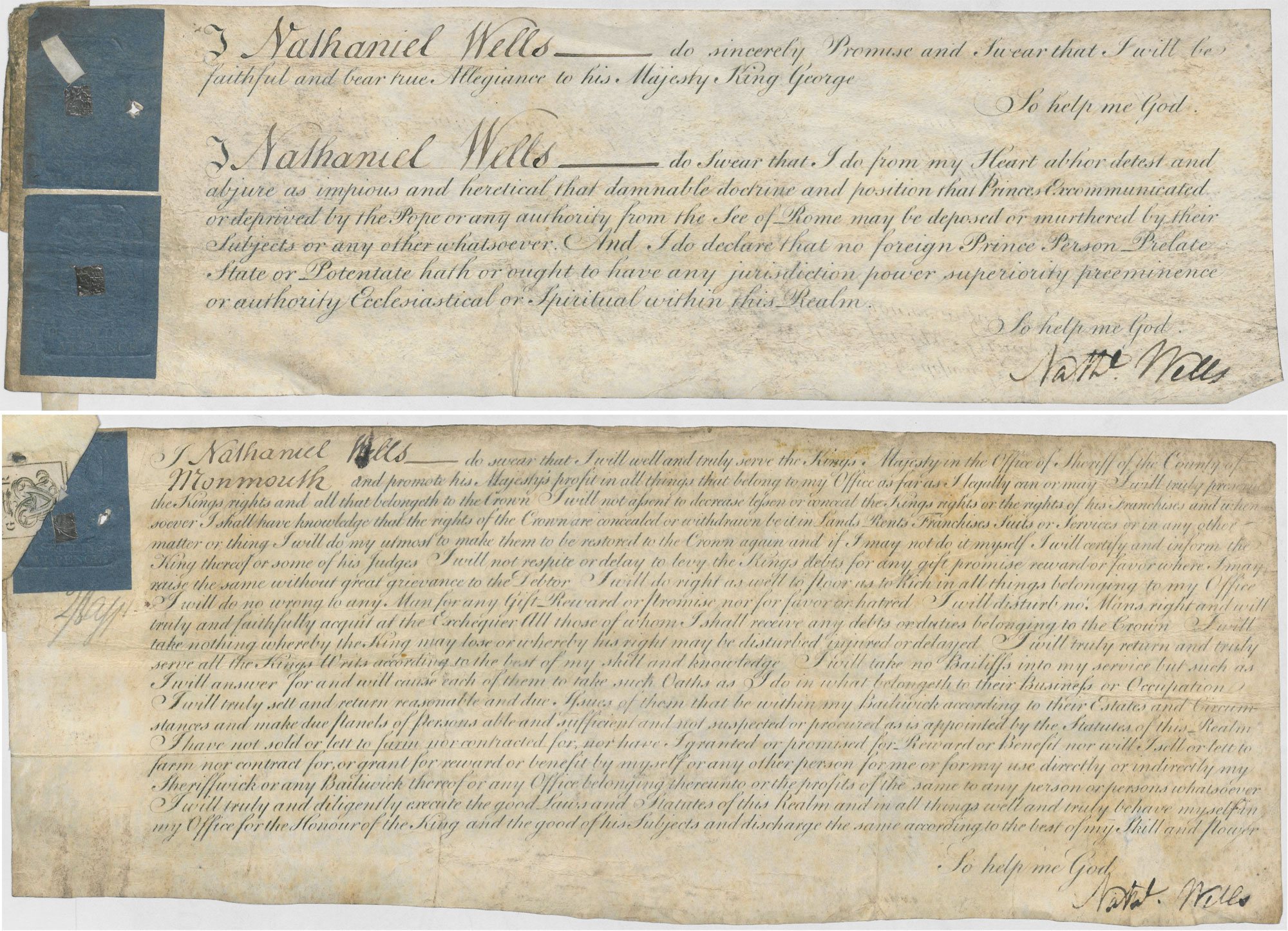 Nathaniel Wells (1779-1852) was the son of a Welsh slave trader and plantation owner with an enslaved woman. He was educated in London, and on the death of his father inherited his estates. Wells was a magistrate and landowner in Monmouthshire and became Britain’s first black High Sheriff. This is interesting as he would have made judgments on white people at a time when black slaves had no rights in the colonies.

Nathaniel Wells_____________ do sincerely Promise and Swear that I will be faithful and bear true Allegiance to His Majesty King George.   So help me God.

Nathaniel Wells_______________ do swear that I do from my Heart abhor detest and abjure [reject] as impious [lacking respect] and heretical [against God’s laws] that damnable doctrine and position that Princes Excommunicated or deprived by the Pope or any authority or murthured [murdered] by their subjects or any other whatsoever. And I do declare that no foreign Prince, Person, Prelate [churchman] State or Potentate [ruler] hath or ought to have any jurisdiction [legal] power, superiority pre-eminence or authority Ecclesiastical or Spiritual within this Realm.

So help me God,

I Nathaniel Wells____________ do swear that I will well and truly serve the King’s Majesty in the Office of Sheriff of the County of MONMOUTH and promote his Majesty’s profit in all things that belong to my Office as far as I legally can or may. I will truly preserve the King’s rights and all that belongeth to the Crown. I will not assent to decrease, lessen or conceal the King’s rights of his Franchises and when so ever I shall have knowledge that the rights of the Crown are concealed or withdrawn be it in Lands, Rents, Franchises, Suits [legal cases] or services or in any other matter or thing I will do my utmost to make them to be restored to the Crown again and if I may not do it myself I will certify and inform the King thereof or some of his Judges. I will not respite or delay to levy the King’s debts for any gift promise, reward or favour where I may. I will do no wrong to any Man for any Gift, reward or promise where I may raise the same without great grievance to the Debtor. I will do right as well to poor as Rich in all things belonging to my Office. I will do no wrong to any Man for Gift, Reward or promise nor for favour or hatred. I will disturb no Man’s right and will truly and faithfully acquit [give] at the Exchequer All those of whom I shall receive any debts or duties belonging to the Crown. I will take nothing whereby the king may lose or whereby his right may be disturbed, injured or delayed. I will truly return and truly serve all the King’s Writs according to the best of my skill and knowledge. I will take no Bailiffs into my service but such as I will answer for and will cause each of them to take such oaths as I do in what belongeth to their Business or occupation. I will truly sell and return reasonable and due. Issues of them that be within my Bailiwick [area over which a bailiff has control] according to their Estates and Circumstances and make due panels of persons able and sufficient and not suspected or procured as is appointed by Statutes of this Realm. I have not sold or let to farm nor contracted for nor have I granted or promised for Reward or Benefit nor will I sell or lett to farm nor contract for or grant for reward or benefit by myself or any other person for me or for my use directly or indirectly my Sherriffwick [area represented by the sheriff or King’s officer] or any Bailiwick thereof or any Office belonging thereunto or the profits of the same to any person or persons whatsoever. I will truly and diligently execute the good laws and Statutes of this Realm and in all things well and truly behave myself in my Office for the Honour of the King and the good of his subjects and discharge the same according to the best of my Skill and Power.

So help me God