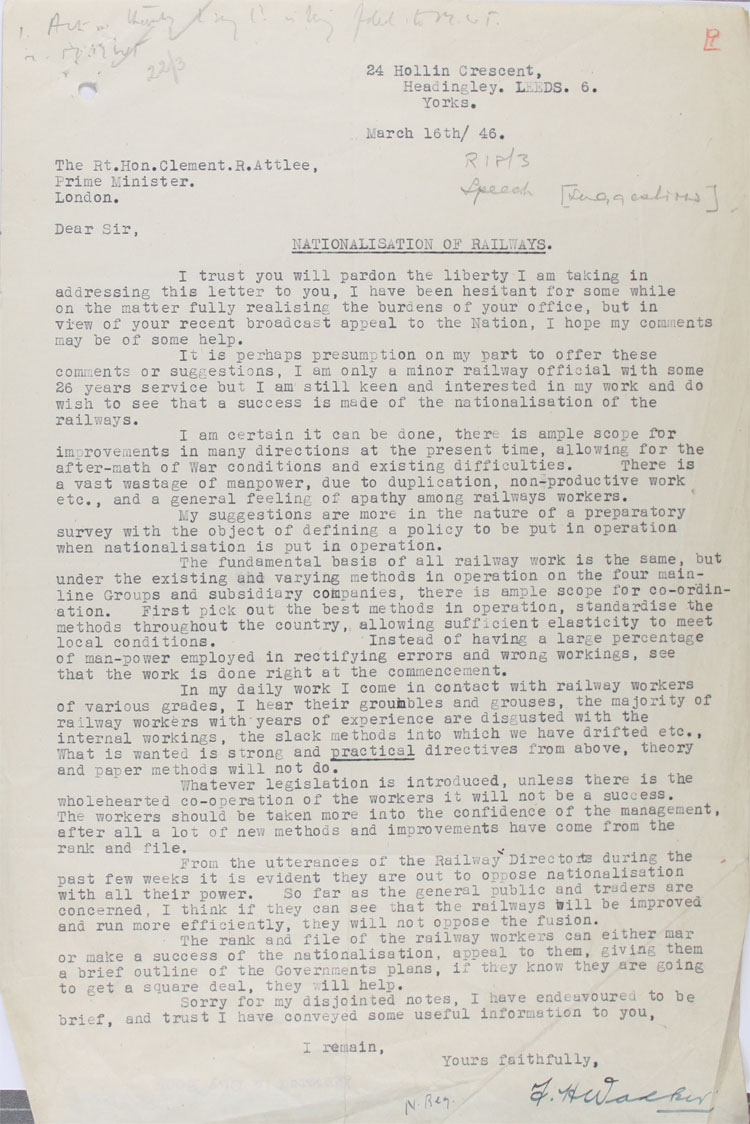 I trust you will pardon the liberty I am taking in addressing this letter to you, I have been hesitant for some while on the matter fully realising the burdens of our office, but in view of your recent broadcast appeal to the Nation, I hope my comments may be of some help.

It is perhaps presumption on my part to offer these comments or suggestions, I am only a minor railway official with some 26 years service but I am still keen and interested in my work and do wish to see that a success is made of the nationalisation of the railways.

I am certain it can be done, there is simple scope for improvements in many directions at the present time, allowing for the after-math of war conditions and existing difficulties. There is a vast wastage of manpower, due to the duplication, non-productive work etc., and a general feeling of apathy among railway workers.

My general suggestions are more in the nature of a preparatory survey with object of defining a policy to put into operation when nationalisation is put in operation.

The fundamental basis of all railway work is the same, but under the existing and varying methods in operating on the four mainline groups and subsidiary companies, there is ample scope for co-ordination. First pick out the best methods in operation, standardise tphe methods throughout the country, allowing sufficient elasticity to meet local conditions. Instead of having a large percentage of man-power employed in rectifying errors and wrong workings, see that the work is done right at the commencement.

In my daily work I come into contact with railway workers of various grades, I hear their grumbles and grouses, the majority of railway workers with years of experience are disgusted with the internal workings, the slack methods into which we have drifted etc., What is wanted is strong and practical directives from above, theory and paper methods will not do.

Whatever legislation is introduced, unless there is the wholehearted co-operation of the workers it will not be a success. The workers should be taken more into the confidence of the management, after all a lot of new methods and improvements have come from the rank and file.

From the utterance of the Railway Directors during the past few weeks it is evident they are out to oppose nationalisation with all their power. So far as the general public and traders are concerned, I think if they can see that the railways will be improved and run more efficiently, they will not oppose the fusion.

The rank and file of the railway workers can either mar or make a success of the nationalisation, appeal to them, giving them a brief outline of the Governments plans, if they know they are going to get a square deal, they will help.

Sorry for my disjointed notes, I have endeavoured to be brief, and trust I conveyed some useful information to you,

I remain,
Yours faithfully,