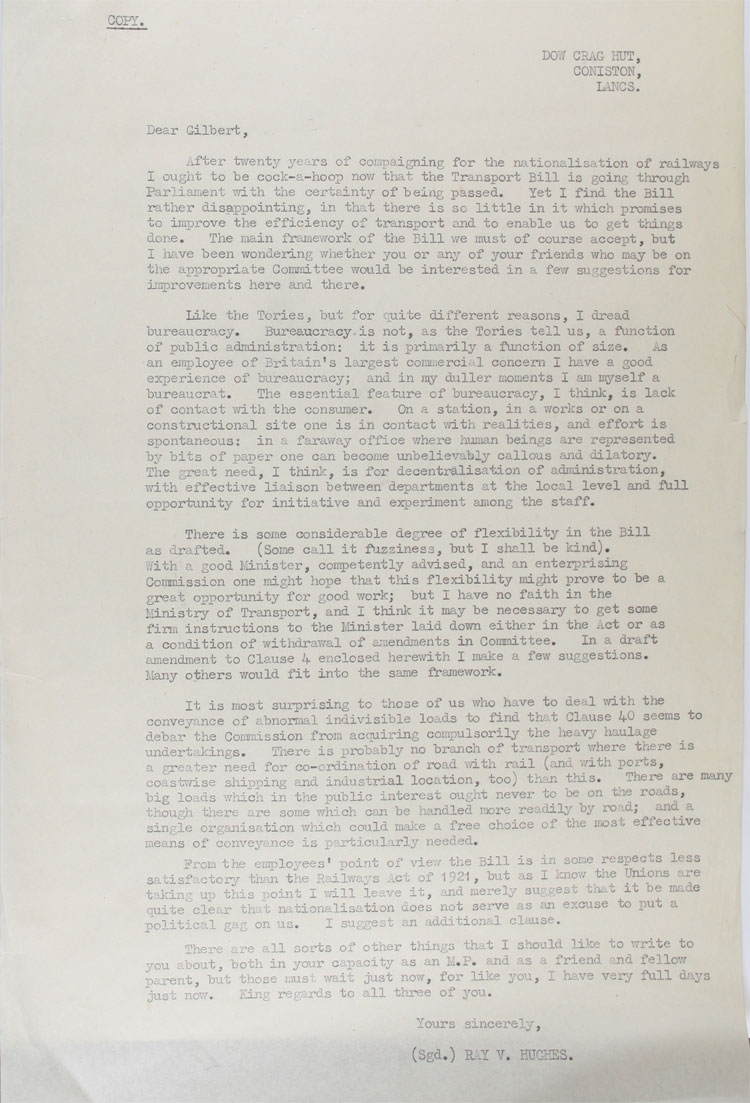 Letter from a senior planning engineer for the London, Midland and Scottish Railway, to MP Gilbert McAllister about the Railways Nationalisation Bill, 30th January, 1947(MT 74/188)

After twenty years of campaigning for the nationalisation of railways I ought to be cock-a-hoop now that the Transport Bill is going through Parliament with the certainty of being passed. Yet I find the Bill rather disappointing, in that there is so little in it that which promises to improve the efficiency of transport and to enable us to get things done. The main framework of the Bill we must of course accept, but I have been wondering whether you or any of your friends who may be on the appropriate Committee would be interested in a few suggestions for improvements here and there.

Like the Tories, but for quite different reasons, dread bureaucracy. Bureaucracy is not, as the Tories tell us, a function of public administration: it is primarily a function of size. As an employee of Britain’s largest commercial concern I have good experience of bureaucracy; and in my duller moments I am myself a bureaucrat. The essential feature of bureaucracy, I think, is lack of contact with the consumer. On a station, in a works or on a constructional site one is in contact with realities, and effort is spontaneous: in a faraway where human beings are represented by bits of paper one can become unbelievably callous and dilatory. The great need, I think, is for decentralisation of administration, with effective liaison between departments at the local level and full opportunity for initiative and experiment among the staff.

There is some considerable degree of flexibility in the Bill as drafted. (Some call it fuzziness, but I shall be kind). With a good Minister, competently advised, and an enterprising Commission one might hope that this flexibility might prove to be a great opportunity for good work; but I have not faith in the Ministry of Transport, and I think it may be necessary to get some instructions to the Minister laid down either in the Act or as a condition of withdrawal of amendments in Committee. In a draft amendment to Clause 4 enclosed herewith I make a few suggestions. Many others would fit into the same framework.

It is most surprising to those of us who have to deal with the conveyance of abnormal indivisible loads to find that Clause 40 seems to debar the Commission from acquiring compulsorily the heavy haulage undertakings. There is probably no branch of transport where there is a greater need for co-ordination of road and rail (and with ports, coastwise shipping and industrial location, too) than this. There are many big loads which in the public interest ought never to be on the roads, though there are some which can be handled more readily by road; and a single organisation which could make a free choice of the most effective means of conveyance is particularly needed.

From the employees’ point of view the Bill is in some respects less satisfactory than the Railways Act of 1921, but as I know the Unions are taking up this point I will leave it, and merely suggest that it be made quite clear that nationalisation does not serve as an excuse to put a political gag on us.  I suggest an additional clause.

There are all sorts of other things that I should like to write to you about, both in your capacity as an M.P. and as a friend and fellow parent. But those must wait just now, for like you, I have very full days just now. Kind regards to all three of you.