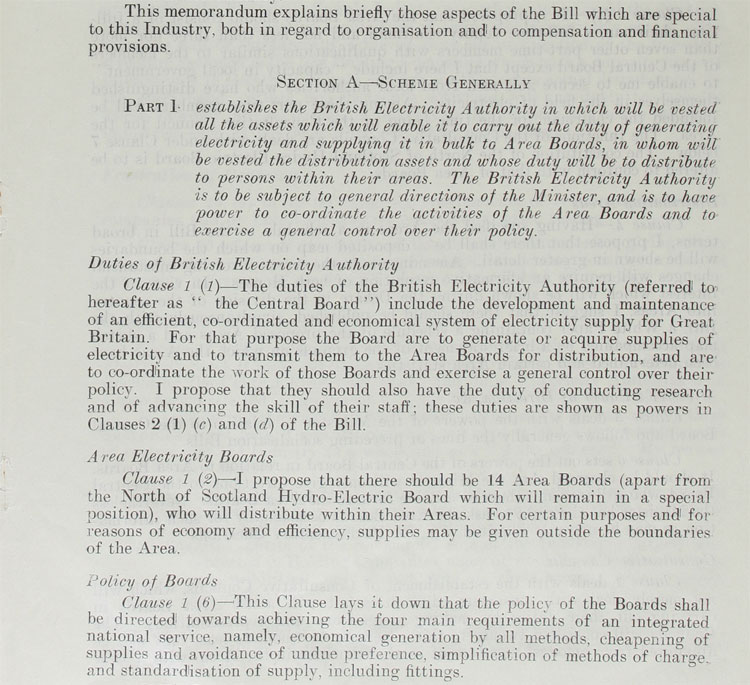 This memorandum explains briefly those aspects of the Bill which are special to this Industry, both in regard to organisation and to compensation and financial provisions.

PART 1      establishes the British Electricity Authority in which will be vested all the assets which will enable it to carry out the duty of generating electricity and supplying it in bulk to Area Boards, in whom will be vested the distribution assets and whose duty will be to distribute to persons within their areas. The British Electricity Authority is to be subject to general directions of the Minister, and is to have power to co-ordinate the activities of the Area Boards and to exercise a general control over their policy.

Clause 1 (1)—The duties of the British Electricity Authority (referred to hereafter as “the Central Board”) include the development and maintenance of an efficient, co-ordinated and economical system of electricity supply for Great Britain. For that purpose the Board are to generate or acquire supplies of electricity and to transmit them to the Area Boards for distribution, and are to co-ordinate the work of those Boards and exercise a general control over their policy. I propose that they should also have the duty of conducting research and of advancing the skill of their staff; these duties are shown as powers in Clauses 2 (1) (c0 and (d) of the Bill.

Area Electricity Boards
Clause 1 (2)—I propose that there are should be 14 Area Boards (apart from the North of Scotland Hydro-Electric Board which will remain in a special position), who will distribute within their Areas. For certain purpose and for reasons of economy and efficiency, supplies may be given outside the boundaries of the Area.

Policy of Boards
Clause 1 (6)—This Clause lays it down that the policy of the Boards shall be directed towards achieving the four main requirements of an integrated national service, namely economical generation by all methods, cheapening of supplies and avoidance of undue preference, simplification of methods of charge and standardisation of supply including
fittings.