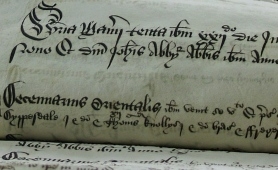 In 2011, The National Archives took on additional leadership responsibilities for archives in England.

We work with all archives including:

We also work with other government departments to do this.

Our approach to the leadership role is a collaborative one, supporting partnerships and working to encourage a sustainable and innovative archives sector.

Alongside our leadership role, we are continuing to deliver our obligations under the Public Records Act and Historical Manuscripts Commission Warrant.

In 2013, The National Archives commissioned the Cultural Consulting Network (CCN), to review its leadership of the archive sector two years on from taking over the responsibility from the Museum, Libraries and Archives Council.

The aim of the review was to:

CCN’s analysis was based on gathering extensive qualitative views from a range of our stakeholders with an interest in its leadership role. Their conclusions were based primarily on these external perspectives.

The National Archives’ response to the leadership review (DOC, 0.04MB)

The report indicated that after the initial two-year period of leadership, The National Archives had made real progress in establishing itself in the sector leadership role and in taking up the accompanying challenges.

The report also outlined a number of recommendations that influenced our future planning, including a re-organisation of the Archive Sector Development department in 2015-16. Alongside extensive consultation, these insights also fed directly into the co-creation of Archives Unlocked, our strategic vision for archives.

Also in Find out about us