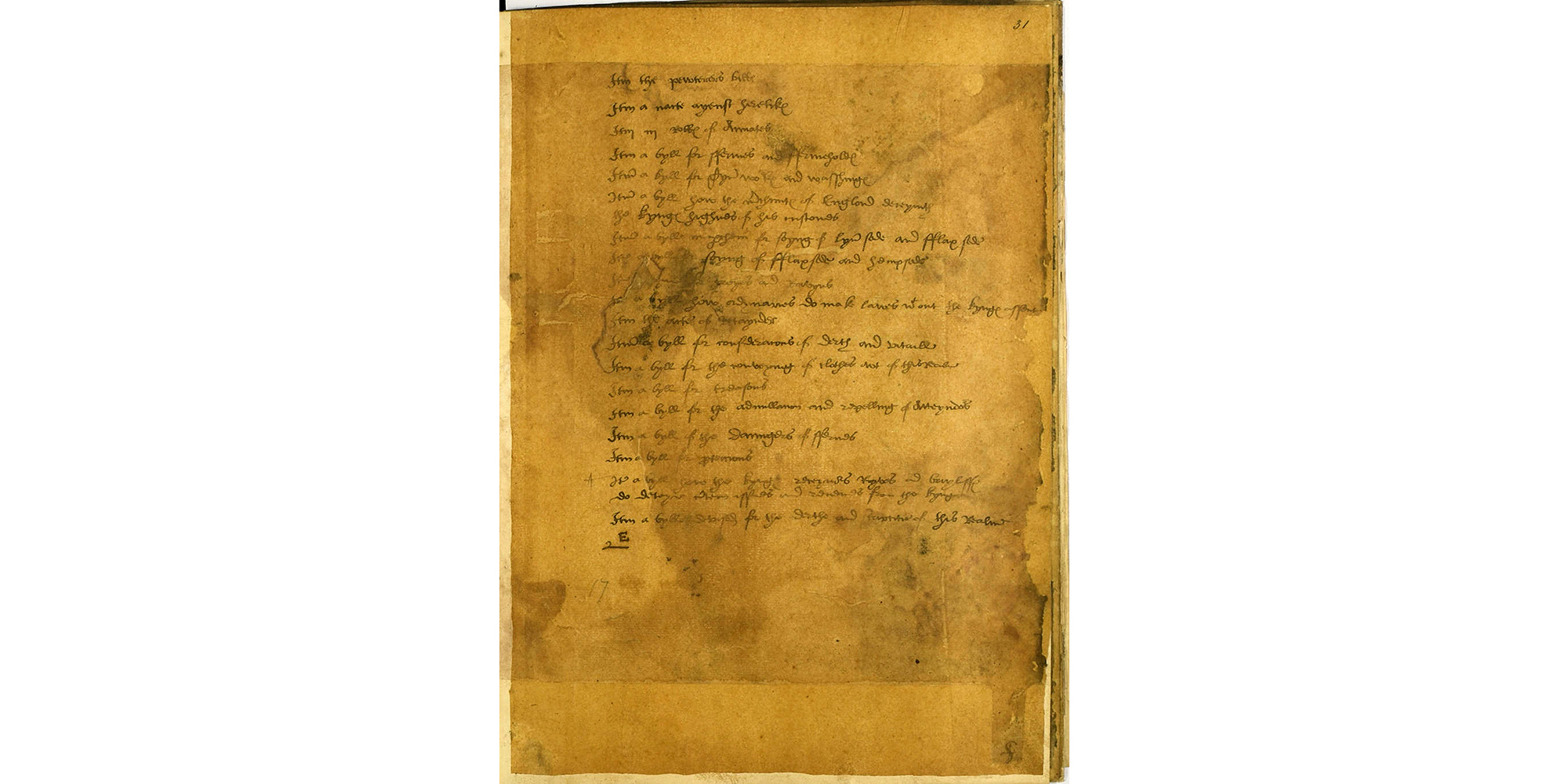 Tucked among the letters, remembrances, and accounts of Thomas Cromwell’s surviving archive are a small number of lists of documents, compiled by his staff. The inventory of goods or possessions is an exemplary form that the office clerks would be familiar with: one item per line, each list begins ‘First …’, and subsequent lines begin ‘Item …’ (Latin for ‘also’). The item description is likely transcribed, or summarized, from annotations already written on each document. For such a small number of examples, they exhibit a range of sometimes ambiguous functions. Financial accounting was one reason for some, but there are other lengthy lists that do not easily reveal why they were made, or their use.

As recordkeepers, we gravitate to the assumption that a form of documentary control is why they were made and kept. An inventory is our grounding model. And yet there are complications. Some lists, for instance, are titled ‘declarations’, made by a servant who had custody or possession of Cromwell’s records. In these cases, we see a reporting activity in an office with a de-centralized structure, with much left to the practices of individuals.

In a few instances, there is a writer’s hesitancy in knowing what to call these lists. For example, the title beginning ‘true pie or cathalog …’ (TNA E 36/141) vacillates between church and commercial worlds. Pie here refers to a religious services calendar, in recognition of the time-bound nature of most of the documents in this particular list: financial instruments such as Bills of Exchange that must be kept track of because they are payable at certain dates. In other titles, date ranges are clearly of importance. Categories of records are sometimes noted, if not titled. Document types, such as those on parchment, are infrequently noted.

From a 21st century perspective, the most perplexing feature is an almost universal disorder of aggregations. A mishmash of completely unrelated content and form follow one after the other: a supplication, an indenture, a copy of a warrant, depositions, a memorial, a court roll, a book of instructions, etc. If such listing reflects an order designed to facilitate retrievals, it is an esoteric design. I would not rule out an intentional form of security in the bedlam.

The physical location of the listed records is rarely recorded. A rare example is one list (TNA E 36/143 f.25-37), with sections labelled A to K. However, the compiler is unfamiliar with any convention. ‘A’ is crammed in between two lines as an afterthought, ‘B’ is hardly noticeable, and the ‘headings’ are oriented from below. Location ‘E’, when read this way, holds copies of some of the most important parliamentary bills of the Tudor dynasty. Here, at least, we can identify a meaningful storage space, aiding strategic planning in pursuit of Henry VIII’s legislative agenda.

Presumably, staff knew where to find certain documents, but the surviving lists may have played a minor role in the use of these records. The 16th century office clerks who created them were not yet practitioners of a recordkeeping art, but improvising from what they knew. These glimpses of traditional methods adapting to novel accumulations of records reveal the contexts of emerging European governance structures. However, forms of documentary organization produced by household secretarial administration are relatively unexplored. Examining these lists of now lost or rearranged archival orders can help fill in our picture of the material culture of early modern recordkeeping.