These records, from series AIR 80, include volunteers from the Women’s Army Auxiliary Corps, Women’s Legion drivers and the Women’s Civilian Subordinates.

The women were based in Britain at first, performing roles such as drivers, mechanics, cooks or office clerks. Later around 500 women served in France and Germany. After the war Helen Gwynne-Vaughan, Commandant of the WRAF, was awarded the Dame Commander of the Order of the British Empire (DBE) in recognition of her work.

Information on the service record can include the following:

You can search the records in our catalogue (£), by filling in the form below. 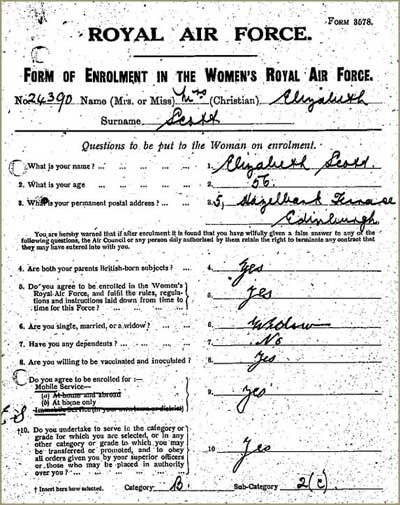 A service record can contain one or more of the following:

You might also find a statement for the services form.

The image above is from the enrolment form of Mrs Elizabeth Scott who was living in Edinburgh when she joined up (catalogue reference AIR 80/213). A widow with no dependants, she was 56 at that time.

There are a number of reasons why you might not find an entry: