How to look for records of... State Papers Ireland 1509-1782: government papers on Irish affairs

This guide will help you to navigate the State Papers Ireland, the key resource at The National Archives for researching the social and religious history of Ireland between 1509 and 1782. All communities are represented in these records, including the Gaelic and Catholic Irish, Ulster Scots, Protestant English settlers and the descendants of the 13th-century Anglo-Normans. State Papers Ireland are also essential for tracing Irish ancestry back to the 16th century.

These records cover all sides of royal government and include correspondence and other papers either written by or representing officials in Dublin, privy councillors serving the monarch in London, and inhabitants of Ireland seeking royal favours or justice.

The State Papers Ireland are made up mainly of correspondence between the monarch’s secretaries of state in Whitehall and the government of Ireland in Dublin.

They are the most important source of information on the governance of Ireland in the early modern period and, in the main, contain official and private letters between the crown’s representatives in Ireland (lead by lord deputy or lord lieutenant) and the monarch’s officials in London.

Sorted and bound chronologically, the papers cover a wide range of subjects, including, but not limited to, the following:

Within the State Papers Ireland it is possible to trace the expansion of the English state from the early 16th century, through the periods of conflict and consolidation of the 17th century, to outright control by the 18th century.

This once disparate set of records was reorganised into a more coherent collection in the 19th century, drawn together from papers held by the former State Papers Office, as well as from the Treasury of the Exchequer and numerous other sources across The National Archives.

State Papers Ireland is made up of eight series:

The destruction of the Public Record Office of Ireland in 1922 resulted in the loss of the archive of the English government in Ireland from the 13th to the 20th centuries. This guide also highlights where to go to consult records that were housed in Dublin and transcribed before the PROI was destroyed.

3. How to search the records

3.1 Online and on microfilm

The published calendars cover the period 1509-1670 and then continue unsatisfactorily in the Calendars of State Papers Domestic until 1704, when the printed series ends.

For 1715-1760, there are unpublished typescript calendars of SP 63 at the Public Record Office of Northern Ireland.

From 1760-1775 the State Papers Ireland are included in the Calendars of Home Office Papers of the reign of George III.

3.3 How to convert references in the printed calendars

Each piece number in SP 60-67 is represented in the printed calendars by a Roman numeral at the top of each page which should be converted into an Arabic numeral (for example, vol. CCCX = SP 63/310). The item numbers, which are on the left hand side of each page of the printed calendars and start from 1 at the beginning of each volume, serve only to identify the item within the piece. See section 11 for a key to these margin references.

4. Records from the Tudor period: the reigns of Henry VIII, Edward VI, Mary and Elizabeth

State Papers Ireland for the Tudor period are contained in SP 60-62 and thereafter SP 63 vols 1-215. Calendars of State Papers relating to Tudor Ireland published in the 19th century are considered not fit for purpose on account of the brevity of their entries and the inaccuracy of place name and personal name identification. Ten volumes from 1586 to 1603 can be read on British History Online.

Documents relating to Ireland for the reign of Henry VIII from institutions other than The National Archives are also included in Letters and Papers of Henry VIII. See section 11 for a key to these references.

The Irish Manuscripts Commission has worked to replace the deficient calendars by publishing certain revised volumes with further publications to appear in the coming years:

Other useful sources for Tudor Ireland include:

The Calendars of State Papers Ireland for the Stuart monarchs are the simplest means of accessing the records for this period and run from 1603-1670. These printed calendars are more reliable and extensive than the 19th-century efforts for the Tudor period but are not comprehensive. The calendars for 1633-1670 also incorporate records from outside the State Papers series including:

From 1670 to 1690, there are no specific finding aids for SP 63 and Irish records are incorporated into the Calendars for State Papers Domestic (available on British History Online behind a paywall or available for free in the reading rooms at The National Archives in Kew). 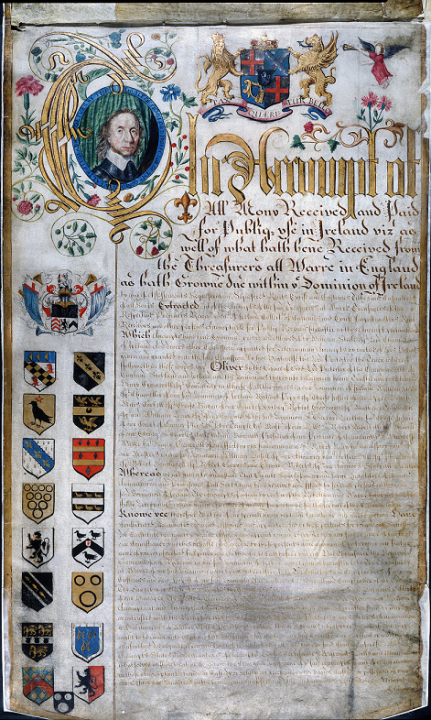 State Papers Ireland for the Interregnum run from SP 63/281-302. Administrative matters are covered in SP 63/281-287. These can be supplemented with the Records of the Committee for Both Kingdoms in SP 21/26, SP 21/28 and SP 21/29 and those of the Council of State in SP 25.  Alongside them, the Acts and Orders of the Interregnum and the Journals of the House of Commons are the principal sources for the governance of Ireland in this period and both can be found on British History Online.

SP 63/288-302 are papers related to Adventurers’ land claims in Ireland and are summarised in the Calendar for State Papers Ireland 1647-1660. They consist of the receipts given to those who subscribed money to parliament under the Adventurers’ Act of 1642 to support the army in Ireland in return for the promise of land, and the subsequent claims made by subscribers to prove their rights to the claim in 1653 and 1654.

Privy Council Registers (PC 2/73-84) continue for these reigns and unindexed images are available to read on Anglo-American Legal Tradition website.

8. Records of Hanoverian Ireland until 1782

By the 18th century, it was established practice for the Lord Lieutenant’s secretary to send ‘public’ dispatches – such as formal acknowledgements and requests or routine military matters – to the Secretary of State for the Southern Department, which was responsible for Irish affairs. The Lord Lieutenant himself would send ‘private’ dispatches, often in his own handwriting, to the Secretary on policy and political issues, sometimes endorsed as ‘secret and confidential’ or ‘most secret’ and this is the correspondence now in SP 63.

Entry books of letters sent from the Secretary of State to the Irish administration are in SP 67 for 1681-1783 with separate warrant books in the same class for 1713-1776 (before 1713 warrants were noted in the entry books).

As with previous reigns, unindexed images of the Privy Council Registers (PC 2/85-128) are available to read on the Anglo-American Legal Tradition website.

10. Records in other archives

11. Key to references in the margins of calendars for State Papers

Most documents calendared are from the State Papers Ireland. This is noted in the left-hand margin by the entry.

Where the item is not described as SP Ireland, the references at the side of each entry refer to the following sources:

For the period 1603-1670, documents are mainly drawn from SP 63, but there are other document sources, as shown in the table below. The left-hand column of the table below lists original references as they appear in the calendars. The right-hand column indicates either the modern National Archives series or other archives and repositories where the documents are held.

* Public Record Office of Ireland (PROI), Four Courts Dublin. Contents largely destroyed by explosion and fire in 1922. For description and extent of holdings as of 1919, see Herbert Wood, A Guide to the Records Deposited in the Public Records Office of Ireland (Dublin, 1919) and subsequent Deputy Keepers Reports for accessions to the PROI between 1919 and 1922. Work to digitally recreate the PROI as it was in June 1922 is underway and will be available in 2022 – see Beyond 2022: Ireland’s Virtual Record Treasury.

There is an extensive bibliography on early modern Ireland. The following publications are among the most accessible, all available at The National Archives’ Library in Kew.

Visit the National Archives’ shop for a range of books.

The introductory essays within the Irish Manuscript Commission’s recently published Calendars of State Papers Tudor Ireland provide invaluable insights into the records within these volumes by scholars most familiar with their contents. Other suggested reading includes: