These records comprise more than 60 different maps depicting plantations, fortifications and townships in Ireland during the reigns of Elizabeth I and James I, in the 16th and 17th centuries.

These maps are among the earliest cartographic representations of Ireland and include the famous map of Hibernia drawn by John Goghe in 1567 (MPF 1/68).

The maps come from state papers Ireland, the main record of government business in Ireland during the early modern period. They have been extracted from series SP 64, and are now held in MPF 1/35-102.

2. How do I search the records?

You can search and download the records in Discovery (£) by using the search box below.

Please note, your results will show all instances of the term(s) you searched for within the record descriptions, as this is currently a keyword search.

3. What information do the records contain?

Most of the maps show areas of Ireland from provinces and baronies to towns and forts, while there are also several maps showing the whole of Ireland. Two of the only maps in this collection that depict areas outside of Ireland are MPF 1/65, a map of the west coast of Great Britain, and MPF 1/66, a map of the Mediterranean.

These maps were drawn at a time when the English were colonising or ‘planting’ Ireland. Maps were one of the English colonists’ tools, along with the written survey and the gun. The English were trying to increase the loyalty of Ireland to the English crown by transferring land ownership from the native Irish to English settlers.

The maps were usually made in response to a particular threat, to show a siege or battle, or to help inform defence strategy against a background of ongoing clashes with Irish chieftains.

The maps show information that would have been used for defence strategies, such as:

Some maps show actual sieges of towns and military engagements with firing cannon. They often name the local chiefs and the family dominant in particular areas.

We do not know who made all of the maps. Some of them are signed by well-known mapmakers of the day, such as:

Some of the maps bear annotations and endorsements in the hand of Sir William Cecil, who became Lord Burghley, one of Queen Elizabeth I’s most influential ministers.

The maps are mostly drawn on parchment, some brightly coloured and decorated, and were originally bound in vellum covers embossed with coats of arms.

To get an idea of what these maps look like, you can download the following map, from MPF 1/58, free of charge: 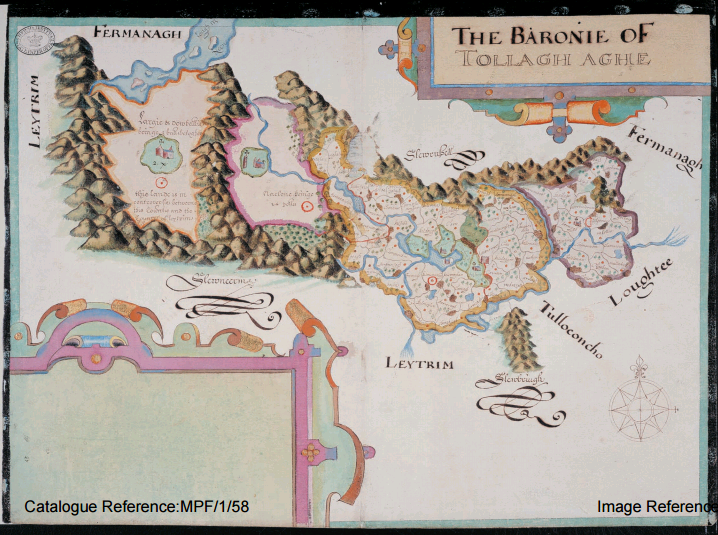 If you have problems with the handwriting of the documents or maps, our palaeography tutorial can help.

The following important points may help you find what you are looking for: