These records, in series WO 161, are reports on over 3,000 British and Commonwealth prisoners of war captured during the First World War.

The reports were made by the Committee on the Treatment of British Prisoners of War before the Armistice was signed on 11 November 1918. The Committee appointed examiners who conducted interviews with repatriated, escaped or interned prisoners of war to ask about how they had been treated. The examiners then wrote up the reports.

Although the reports contain valuable information, they represent only a tiny percentage of the estimated 192,000 British and Commonwealth captives. They do not include the many prisoners of war who were liberated after the Armistice.

The final two fields allow you to search by other people or organisations mentioned within the reports, such as an embassy.

Most reports can include details of:

A few early reports contain straightforward answers to specific questions. Not all standard questions were filled in on the form.

Standard questions from the hospital enquiry sheet include:

Unlike many other records, the reports often describe what happened after the battle in which the prisoner was captured. 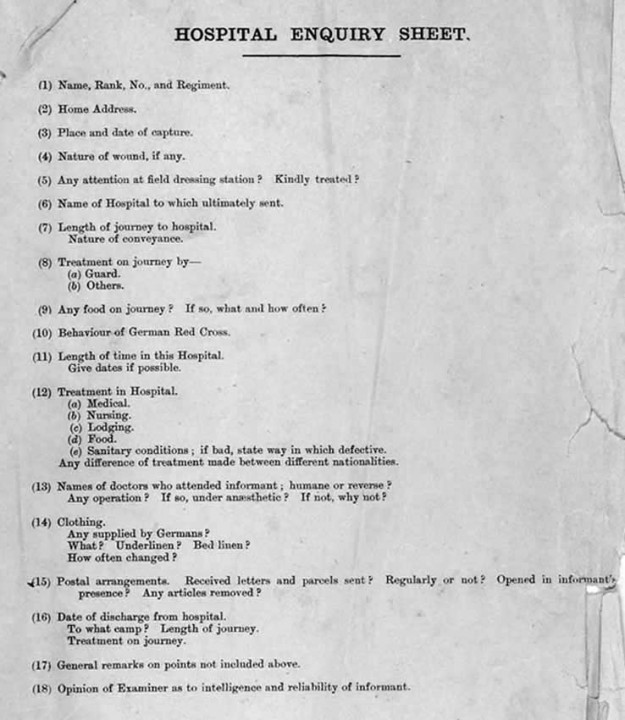 Hospital enquiry sheet in WO 161

Click on the image to the right to see an example of a hospital enquiry sheet found in a report.

Not all records survive. Pages 822-1575 of the other ranks reports have not survived in WO 161. Some are in the series FO 383: they have not been digitised, but you can still search them by name in our catalogue.

If you don’t find a report for an officer it might be worth checking to see if it survives in the officer’s service record in WO 339 or WO 374. After repatriation all officers were required to complete a report concerning the circumstances of their capture.

It’s also possible that a soldier’s regiment has its own list of prisoners of war. You can search for the contact details for regimental museums in the Find an archive directory.