There are over 5 million cards, held in series WO 372. Most of the cards are for soldiers in the British Army. The collection also includes:

Most of the cards contain information about campaign medals, which were generally awarded to all those who served overseas. However, some of the cards record entitlement to gallantry and long service awards.

It is Ministry of Defence policy to not issue medal replacements for service before 1920, irrespective of entitlement. You may be able to obtain duplicate medals from a coin or medal dealer. Alternatively, replica medals can be purchased from The National Archives bookshop.

You can search for an individual medal index card using the form below. You do not need to fill out every field to search these records; using only the last name and regiment number often works. Your search results will be displayed in Discovery, our catalogue. From search results you can select an individual record (by clicking on the title) and download it (£).

Your download will actually contain the images of six medal cards (with the exception of the Indian Army medal cards, which download individually), usually for six different individuals with similar or even identical names. Given this, if you are looking for the medal cards of two different people with the same surname it may only be necessary to download one image. In your search results, look for the Reference code. If the reference is the same for two separate individuals, you will only need to download one image for both cards.

Please note you can also search for, download and view these records on Ancestry.co.uk (£) and Findmypast.co.uk (£).

It’s important to note that the cards do not contain much personal information. You may be able to find out more from the person’s service record, if it survives.

For each person the cards record:

The card may mention the theatre of war entered, such as (1) France, but occasionally they only give the code number, or nothing if the date of entry is after 1916.

Where additional remarks are recorded on a card, you may find information on:

The original medal issue and medal receipt may also be noted. However, most of the cards record medal entitlement rather than the awarding of medals. If you want to check whether a person received a medal, you can consult the medal rolls (WO 329) which should be annotated with pencil ticks. These campaign medal rolls are available online via Ancestry £.

Occasionally, the medal card will confirm that the individual did not receive any medals, including many soldiers who went to France after 11 November 1918. They thought they were entitled and applied, but had their application refused.

Others failed to meet the required criteria for certain awards, had not served abroad, or forfeited their campaign medals due to a disciplinary infringement.

The 1914 Star was instituted in 1917 for service ashore in France and Flanders between 5 August and 22 November 1914. In 1919 a clasp bearing the above dates was authorised and given to personnel who had actually been under fire between the prescribed dates.

The British War Medal 1914-1920, authorised in 1919, was awarded to eligible service personnel and civilians. Qualifications for the award varied slightly according to service. The basic requirement for army personnel and civilians was that they either entered a theatre of war, or rendered approved service overseas between 5 August 1914 and 11 November 1918. Service in Russia in 1919 and 1920 also qualified for the award.

The Victory Medal 1914-1919 was also authorised in 1919 and was awarded to all eligible personnel who served on the establishment of a unit in an operational theatre.

The Silver War Badge, sometimes erroneously called the Silver Wound Badge, was authorised in September 1916 and takes the form of a circular badge with the legend ‘For King and Empire-Services Rendered’ surrounding the George V cypher. The badge was awarded to all of those military personnel who were discharged as a result of sickness or wounds contracted or received during the war, either at home or overseas.

Most of the DCM, MM and MSM card indexes note in which operational theatre the award was won.

The card will not give the reasons for the award, but you might find a citation in the Gazette.

Some of the award dates are given as a numerical code – use the table below to interpret the codes.

There were various gallantry awards, with different qualifications for each type:

The Distinguished Conduct Medal (DCM), second only to the Victoria Cross, was awarded to all other ranks for exceptional bravery.

The Military Medal (MM) was awarded to warrant officers, non-commissioned officers and other ranks for gallantry in action against the enemy. It ranked below the Distinguished Conduct Medal.

The Meritorious Service Medal (MSM) could be awarded for services in connection with the war or for gallantry but not in face of the enemy.

Commanders-in-Chief in the field submitted periodical lists of officers and soldiers who were ‘mentioned in despatches’. Award of a Mention ranked below MC or MM and could be for gallantry in action or for a wide range of services on and off the battlefield.

The medal index cards are displayed in sets of six (with the exception of the Indian Army medal cards, which download individually), usually for six different individuals with similar or even identical names.

Several different designs of medal cards were used but the most common type was the following:

The left hand side of the card contains a printed list of the campaign medals. A note in the ‘roll’ and ‘page’ column meant the soldier was awarded that medal. You may also see ‘do’, which meant ‘ditto’. 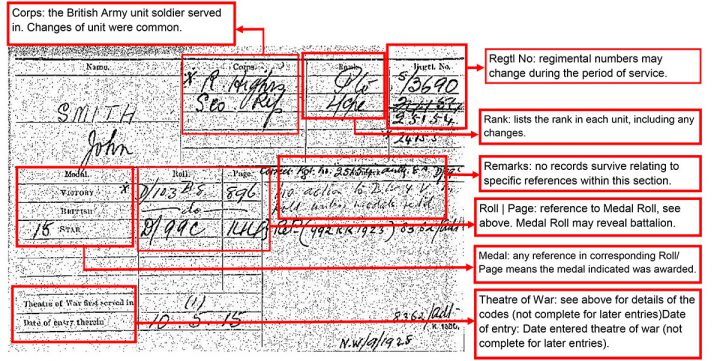 Example of the most common type of design for a medal index card (catalogue ref: WO 372/18)

The essential difference with this design is that the medal entitlement is at the top right hand corner and the entire lower half of the card is left free for any remarks. 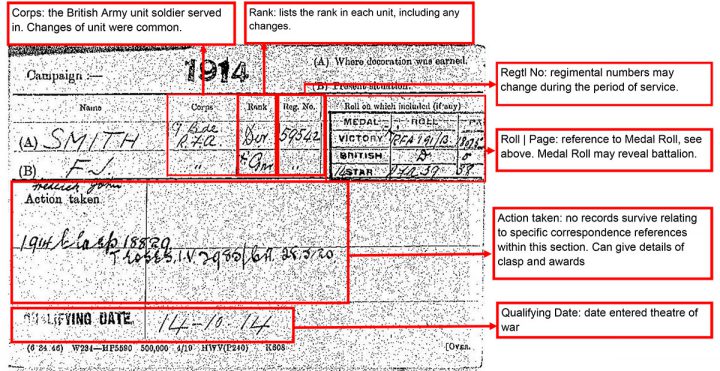 This type of card was used for individuals who received the Silver War Badge only. The card contains information about an individual and often gives the date of enlistment, date of discharge and reason for discharge.

For a more detailed list of abbreviations for rank and unit, you might find it useful to refer to the PDFs below or alternatively The Collector and Researcher’s Guide to the Great War by Howard Williamson.

Occasionally there is no regimental number recorded on the card, which may be the case if the person was an officer. In this case try searching by name and regiment only.

If members of the Royal Flying Corps did not see service overseas until 1916 or later, you will not find a medal card here. The Air Ministry maintained these medal records and they have not been transferred to The National Archives.

You may need to change the spelling of the words you are searching with; this is most commonly the case when searching for a sergeant, which was more commonly spelt as ‘serjeant’ at the time the cards were produced.

Officers had to apply for their campaign medal, so if they did not apply, there will not be a medal card.