Use this guide for advice on how to find records of trials held at the Old Bailey (later known as the Central Criminal Court) since 1674, as well as records of prisoners and convicts tried and held there.

The Old Bailey is a law court where cases against people accused of serious crimes are tried by a judge and jury. These include amongst other crimes:

This guide will help you to understand the kinds of records that Old Bailey trials produced and what information you can expect to find here and elsewhere. There is also advice on how the records were organised and filed, and how this affects how you search for records to this day.

Not all records have survived as clerks sometimes destroyed them when they ran out of space. Earlier records are less likely to have been kept than later ones.

The Court deals with major criminal cases within Greater London. In exceptional cases, trials have been referred to the Old Bailey from other parts of England and Wales.

2.1 Cases dealt with by the court

The Old Bailey has historically dealt with the following crimes, among others: 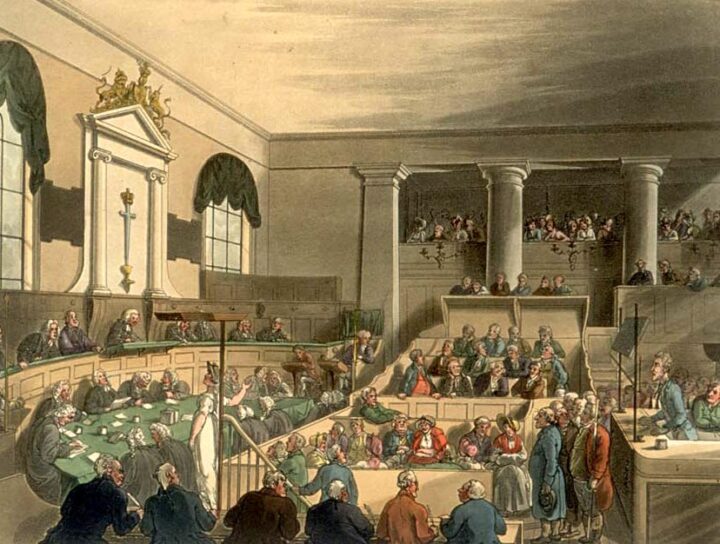 A trial at the Old Bailey in London as drawn by Thomas Rowlandson and Augustus Pugin 1808-1811 (source: Wikimedia Commons).

2.2 Counties and districts covered by the court’s jurisdiction

Located in the City of London, the court’s area of jurisdiction until 1834 covered crimes committed in:

From 1964 the area of jurisdiction was redefined as:

Under the Central Criminal Court Act of 1856, the court could also hear cases outside its ordinary jurisdiction to ensure a fair trial where local prejudice existed or where, due to its frequent sessions, it could offer an early trial and so avoid the delay in waiting for the next assizes. To this day, criminal cases from other parts of England and Wales are occasionally dealt with by the court.

When crown courts replaced assize courts in 1971 the title Central Criminal Court was retained for the crown court sitting in London.

2.2 Counties and districts covered by the court’s jurisdiction

Located in the City of London, the court’s area of jurisdiction until 1834 covered crimes committed in:

For trials of crimes committed in London south of the Thames before 1834 you need to look at the records of assize courts for Surrey.

From 1964 the area of jurisdiction was redefined as:

Under the Central Criminal Court Act of 1856, the court could also hear cases outside its ordinary jurisdiction to ensure a fair trial where local prejudice existed or where, due to its frequent sessions, it could offer an early trial and so avoid the delay in waiting for the next assizes. To this day, criminal cases from other parts of England and Wales are occasionally dealt with by the court.

When crown courts replaced assize courts in 1971 the title Central Criminal Court was retained for the crown court sitting in London.

The most recent records we hold for this court are between 30 to 50 years old. Access to these records may be closed or restricted.

Records from the last 6 years are still held by the Central Criminal Court itself.

For records from the last 20 years, you will need to contact HM Courts & Tribunal Service.

You can locate documents in the following collections by clicking on the links below and following the advice in our ‘How to search’ section:

Appeals and criminal petitions, up to 1990 in J 81 (for more information see section 9).

If the court records you are looking for fall outside of these dates, contact HM Courts and Tribunal Service.

4. How to search and what to expect

Some of these records have been digitally copied and made available online but many have not been copied and to see these you will need to consult them at our building in Kew. The search for records held at Kew can, however, begin online, using our online catalogue.

Use the advanced search option to restrict your search results to records of a specific government department or court, using the letter code for each department/court. For records of Old Bailey cases the code will usually be one of the following:

Every record we hold is represented in our online catalogue by a title, a reference and a brief description. When you use our catalogue to search for records you are actually searching across these titles and descriptions, rather than the contents of the records themselves. By clicking on any item in your search results you can see what the options are for viewing that record.

Some of these records have been digitally copied and made available online but many have not been copied and to see these you will need to consult them at our building in Kew. The search for records held at Kew can, however, begin online, using our online catalogue.

4.2  What to expect: records of defendants

The most detailed records of people involved in Old Bailey trials are invariably records of defendants.

Typically you will find the defendant’s name, occupation and place of abode.  However,  this information can sometimes be unreliable as aliases were often used and other false details were given. The place of abode mentioned is often where the crime took place rather than where the defendant lived.

5. Summaries of trials: proceedings and other accounts

The most detailed records you are likely to find for any trial are known as proceedings or sometimes sessions papers. They provide summaries of trials and what was said in court. They vary in length and detail, from reports of a few dozen words to detailed transcripts.

Proceedings usually contain, as a minimum, details of:

The original proceedings are held at a variety of libraries and not at The National Archives but they are available to search and view online at the Old Bailey Proceedings Online website.

The Chadwyck Healey microfiche collection of British Trials 1660-1900 (which also includes a few trials from 1901-1908) is available in The National Archives reading rooms and in some major libraries. These unofficial contemporary accounts of trials were originally published as pamphlets and sold to the general public. They are accompanied by separate name indexes.

The National Archives does hold some printed proceedings and you can search by date for Old Bailey sessions papers 1801-1904 in PCOM 1. You can also search the printed shorthand notes of proceedings 1834-1912 in CRIM 10, containing duplicates from PCOM 1.

5.2 Accounts of trials in newspapers

Accounts of trials held at the Old Bailey after 1913 are most likely to survive only in newspaper reports. Often newspapers recorded proceedings in great detail. The National Archives does not hold newspapers – instead you should visit the British Library’s Newspaper Library.

Search by name of defendant or type of crime for shorthand notes from selected cases, in J 82. These are trials that were referred to the Court of Criminal Appeal, mostly after 1956 though there are a few files from 1945.

Depositions are statements given in court as evidence in a trial.

Use our catalogue to search deposition records by name of defendant and date. Either restrict your search to the following record series or browse by reference by clicking on the links:

They cover all trials for:

A 2% random sample was kept for other trials. Some depositions include plans and photographs. Some are closed for 75-100 years. 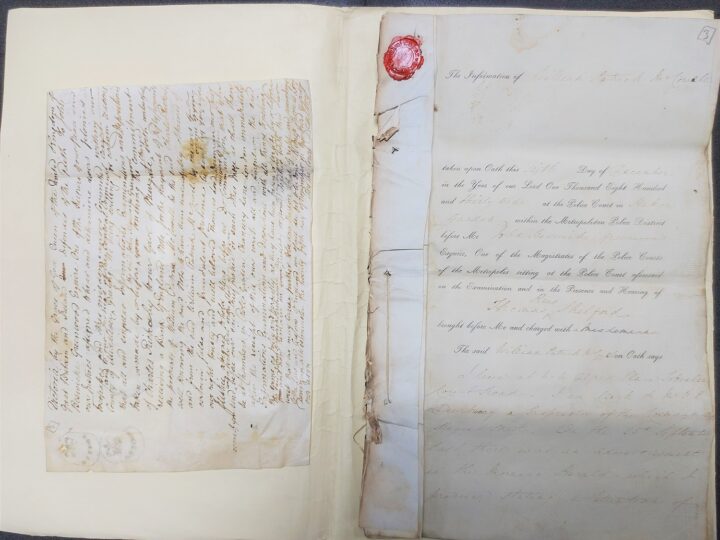 Indictments are the formal statements of the charge against the accused.

You can search by surname of the accused by consulting the alphabetically arranged calendars and indexes of indictments. You will need to know the approximate date of the trial to find the right calendar or index.

Browse through the appropriate record series by year range for the following periods:

Though primarily an index, CRIM 5 does also provide the following information:

Use the reference obtained through the calendars and indexes listed above to access indictments within the following periods:

For more recent records, not held at The National Archives, contact the Ministry of Justice. See their advice on Freedom of Information requests.

Browse through the court books in CRIM 6 (1834-1949). You will need to know the approximate year in which the trial took place as these books are arranged in ranges of years. 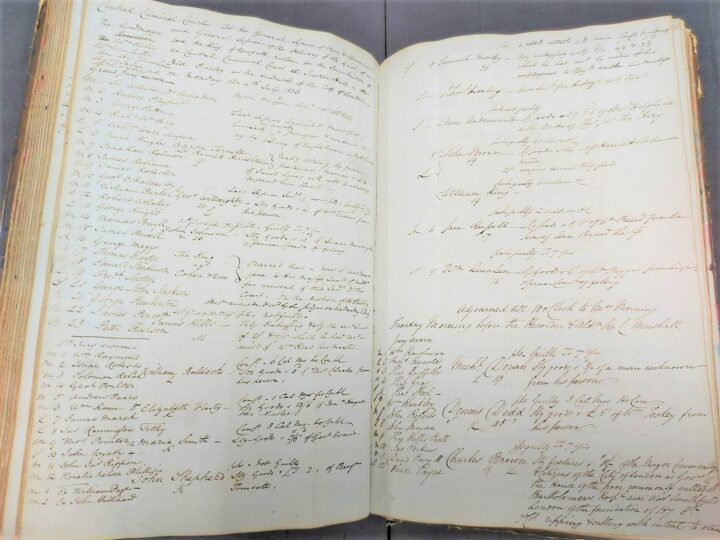 Appeals, against verdict or sentence, for the following period can be found in the record series listed: 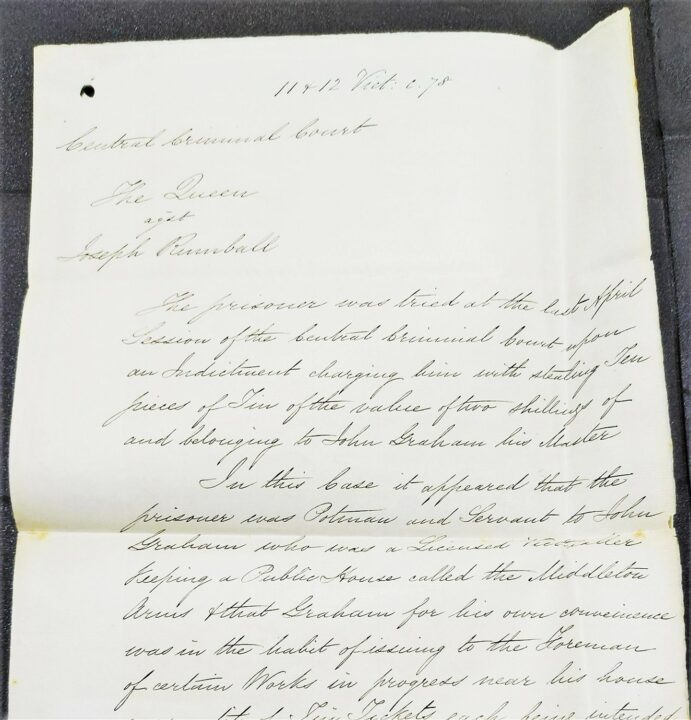 The Office of Director of Public Prosecutions (DPP) was created in 1879 with powers to institute and conduct criminal proceedings in any of the senior criminal courts – assizes, Crown Court, King’s/Queen’s Bench or Central Criminal Court.

Before 1879, the Home Office gave advice on prosecutions to police forces and magistrates’ clerks and gave directions to the Treasury Solicitor (TS) to institute proceedings in important cases, notably those involving political crimes.

Director of Public Prosecutions and Treasury Solicitor files on cases can be searched for by surname of the defendant.

Treasury Solicitor’s files on criminal cases can be found in various series, including case papers in TS 11, TS 18 and TS 22; and transcripts of proceedings in TS 36.

The Old Bailey contains a network of cells used to hold prisoners awaiting trial and those convicted of crimes. 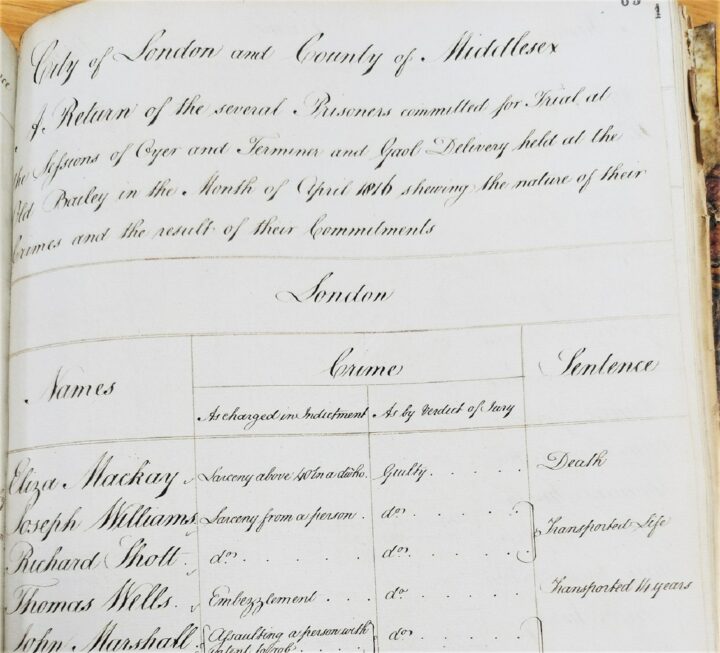 Image of returns of convicted prisoners for trial at the Central Criminal Court, including charges against them and results of trials 1815 -1818 (catalogue reference: HO 16/1)

Records of convicted criminals held prisoner at the court exist in the form of after-trial calendars.

There are no after-trial calendars after 1971. Something similar called memorandums of convictions have been kept since 1971 but they are supposed to be destroyed after 20 years and therefore do not get transferred to The National Archives.

After-trial calendars of prisoners include some or all of the following details:

Browse through the record series of after-trial calendars by clicking on the links below to find details of prisoners tried within the following year ranges:

Records from a number of archives have been brought together and digitised on the London Lives website including Quarter Sessions records for City of London, Middlesex and Westminster.

Though there are no records from quarter sessions courts at The National Archives, our library contains the following printed and published calendars for records held at the London Metropolitan Archives:

A range of books can also be purchased from the National Archives’ shop.

The following publications are available at The National Archives library at Kew:

Courts of law records held in other archives