How to look for records of... Divorce

This guide will help you to find records held at The National Archives for divorce and separation. You are unlikely to find documents for any divorce since 1937 among our records.

For legal proof of your own divorce, or any divorce in England or Wales since 1858 to the present, go to the GOV.UK website for details of how to request a copy of a decree absolute.

Contact the National Records of Scotland for Scottish divorce records. For proof of a divorce in Northern Ireland, contact the court where the divorce was granted (either the Royal Courts of Justice (Belfast) or a county court). See the Northern Ireland Court Service website to find a court’s contact details.

To see most of the records held here you will either need to visit us or, where you can identify a document reference, order a copy (£). You also have the option of paying for research (£).

2. A short history of divorce in England and Wales since 1858

In 1858 the handling of the legal process for divorce was transferred from the ecclesiastical courts to a newly established civil court, the Court for Divorce and Matrimonial Causes. In 1873 responsibility was passed to a division of the new Supreme Court. All divorce suits took place in London, thus restricting divorce to wealthier couples.

Divorce did not really open up for all classes until the 1920s with the extension of legal aid and the provision of some local facilities. In 1922, ten assize courts were named as suitable for the hearing of certain kinds of divorce and in the years to follow the number of courts hearing divorce cases expanded significantly. In the late 1960s divorce was taken over by the county courts and most divorces now take place at county courts.

3. What can you view online?

The following records are available to view online:

Each divorce suit created a case file. The National Archives holds case files for all divorces from the Supreme Court 1858-1937 – very few case files survive after 1937.

4.1 What proportion of case files survive?

The survival rate of divorce case files is:

No case files survive from the district registries set up in 1927. 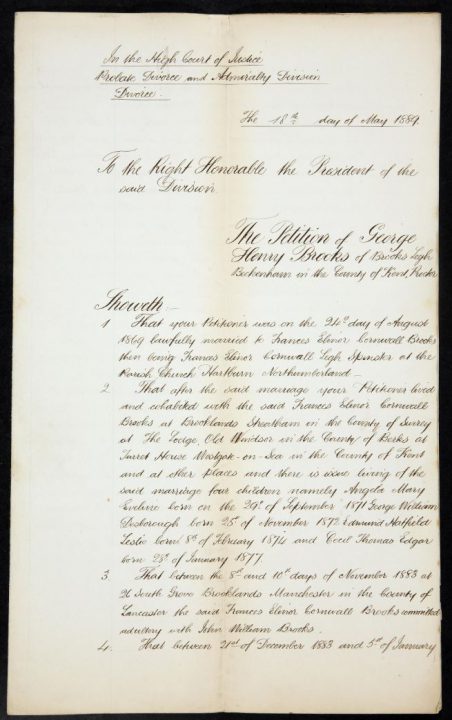 Most files were stripped of the less formal papers, but some full files were kept as examples of how the court operated. These are described as ‘full files’ in our catalogue.

Case files are now destroyed 20 years after the divorce. Within this 20-year period, you can apply to the relevant court for permission to see the file. You can search surviving case files from 1858 onwards by name in J 77. The original indexes are in J 78.

The only record of those cases where the case file has not survived would be the decree held by the court. Contact the Central Family Court for more information.

Search Discovery, our catalogue, by name of petitioner, respondent or corespondent for divorce suits in England and Wales, both successful and unsuccessful, in J 77.

Very few files survive for the period 1938-1972. Files containing petitions dated after 1972 have not been transferred to the National Archives.

Narrow your search by using double quotation marks to find a person’s full name, such as “John Williams”.

In cases of suspected collusion or deceit, decrees could be overturned.

Registers of divorce cases investigated by the King’s or Queen’s Proctor, from 1875, are in TS 29. They are closed for up to 75 years. You may find examples of collusive divorces in the case files. See section 3 on how to search for case files.

In 1858 divorce law was introduced in England but divorce remained too expensive for most people until the 1920s. Before 1858 divorce in the modern sense, that both partners were free to re-marry, was rare. People instead found other ways to separate – through custom, the church courts, the common law courts and Parliament.

See the table below for details of which records are held by The National Archives and which are at local archives.

A deed of separation would be drawn up between the husband and a trustee of the wife (not the wife herself) and provision made for the wife and children.

If you know the names of both parties, you might find a deed of separation in the Close Rolls in C 54.

You may find records of the deed and correspondence among family or estate records. Search our catalogue to see where different collections are held.

Deeds of separation were used even after the Matrimonial Causes Act of 1857, as couples were still unable to end a marriage:

A divorce a mensa et thoro was a legal separation, granted on the grounds of adultery and/or life-threatening cruelty.

You may find a record of these in the Close Rolls in C 54 or decree rolls of Chancery in C 78. In C 78 you may also find:

You can find some separation settlements in PC 2 indicating that the Privy Council had an interest in ensuring they were adhered to.

First appeals could be heard at the Archbishop’s Court at Canterbury or York. Further appeals were to the High Court of Delegates up to 1834, and the judicial committee of the Privy Council between 1834 and 1858.

On appeal, the case would be suspended in the lower court, and transcripts of all the records transferred upwards. The table below shows where you can find records for each court.

DEL 2 is the main series of cause papers, which include allegations and petitions. The papers are arranged by case and term, and consist of bundles of papers relating to each particular case. Details can include:

The early papers are often in Latin. Most of the material is in a standard legal form, but there are sometimes personal details about the parties.

The accounts of proceedings can sometimes be very long. The case books in DEL 7 (1796-1834) and PCAP 3 (1834 onwards) contain bound volumes of printed proceedings and sometimes manuscript records of the judgement given.

The church (consistory) courts of the bishops could grant a declaration of nullity, meaning the marriage was considered invalid from the start. The children became illegitimate and the wife lost her right to inherit from her husband.

You can find consistory courts records in local archives.

An annulment was a form of legal separation which protected the wife’s rights and kept the children legitimate, but neither party could remarry unless the other died. The husband or wife could subsequently apply to the church court for a declaration of nullity.

The husband of an adulterous wife could take out a civil suit of criminal conversation in the Court of King’s Bench or Common Pleas to claim damages from his wife’s lover.

In 1809 the House of Lords ordered that the transcript of a preliminary trial for criminal conversation should accompany every divorce bill brought before it.

You may find reports of sensational trials in newspapers from the late 18th century. The Times (£) covered many in some detail.

9. Full divorce by Act of Parliament

In order to remarry, a full divorce by Act of Parliament was required. Before 1858 fewer than 300 full divorces were granted. Only four of the petitioners were women and they had to prove life-threatening cruelty by their husband.

You can find divorce acts in the Parliamentary Archives. Only a few examples exist in The National Archives in C 89 and C 204.

Search The Times Archive (£) to view articles about newsworthy divorce cases from 1785-1985.

Browse a list of private Acts of Parliament to check for divorces before 1858.