‘fear of the black hole’ 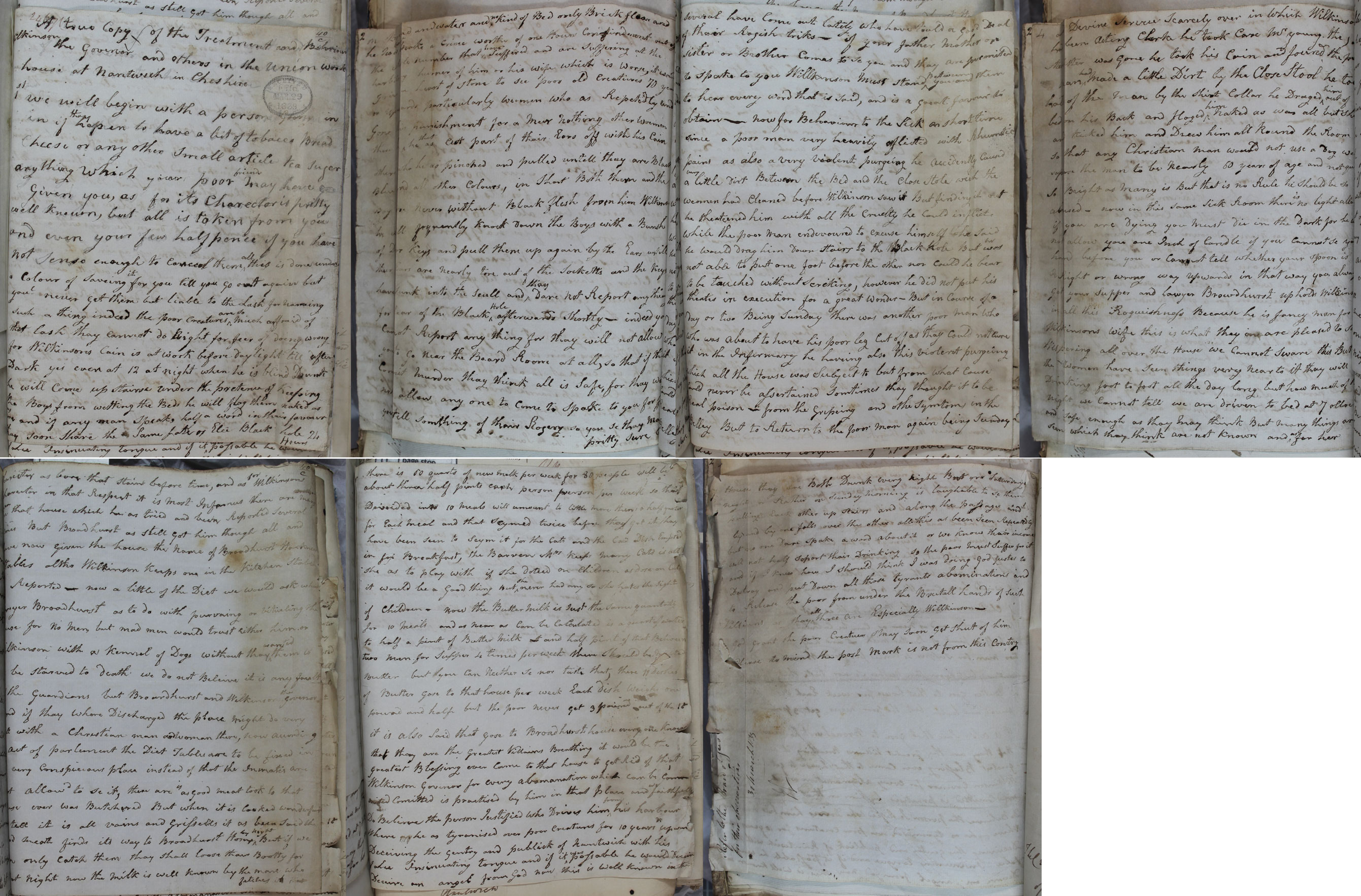 An anonymous letter from a pauper covering the brutality of the master and inhumanity of the regime in the workhouse, 29 March 1839, Catalogue ref: MH 12/1013

A true copy of the treatment and behaviour [of] Wilkinson the Governor and others in the Union Work house at Nantwich in Cheshire. First we will begin with a person going in [the workhouse], if they happen to have a bit of tobacco, bread, cheese or any other small article, tea, sugar or anything which your poor friend may have given you, … all is taken from you and even your few half pence if you have not sense enough to conceal them all. This is done under a colour of ‘saving it’ for you till you go out again, but you never get them back and likely are to be [whipped for naming] such a thing. Indeed, the poor creatures are so much afraid of that lash they cannot do right for fear of doing wrong for Wilkinson’s cane is at work before daylight till after dark.  Yes, even at 12 at night when he is blind drunk [he] will come up the stairs under the pretence of keeping the boys from wetting their beds. He will flog them naked. If any man speaks half a word in their favour they soon share the same fate or [get put] in the black hole [locked up] for 24 hours with bread and water and no kind of bed and only a brick floor…

He makes any crime worthy of one hour’s confinement. Many have suffered and are suffering from the arbitrary will of him or his wife which is worse. It would [grieve] a heart of stone to see poor old creatures of 70 years or upwards, particularly women, who have repeatedly undergone this punishment for merely nothing. Other women have had cut part of their ears off with his cane, others who he as pinched and pulled until they are black and blue and all other colours. In short both them, and the boys are never without black flesh from him, Wilkinson. He will frequently knock down the boys with a bunch of door keys and pull them up again by the ears until their ears are nearly torn out of the sockets and the keys have sunk into the scull. They dare not report [anything] for fear of the Black Hole. Indeed [you] cannot report anything for they will not allow you to go near the Board Room at all, so that if [they] commit murder they think all is safe, for they [do] not allow anyone to come to speak to you for you tell something of their roguery so you see.

Several [paupers] have told a good deal of these roguish tricks.  If your father, mother or sister or brother comes to see you, they are permitted to speak to you only if Wilkinson stands between you and them to hear every word that is said and it is a great favour to obtain.  Now on behaviour to the sick– a short time since, a poor man, very heavily afflicted with rheumatic pains and diarrhoea, he accidently caused a very little dirt between the bed and the close stool [a covered chamber pot set in a wooden stool] which the women had cleaned before Wilkinson saw it. But finding it out, he threatened him with all the cruelty he could inflict while the poor man endeavoured to excuse himself, he said he would drag him downstairs to the Black Hole. The man was not able to put one foot before the other, nor could he bear to be touched without screaming. However [Wilkinson] did not put his threats into execution for a great wonder.  But in course of a day or two [later] being Sunday there was another poor man who was about to have his poor leg cut off as they could not cure it in the infirmary. He also having this violent purging [diarrhoea] to which all the house was subject. What was the cause could never be discovered. Sometimes they thought it to be [real] poison from the griping [cramps] and other symptoms in the belly. But to return to the poor man, again, being Sunday and Divine Service scarcely over, in which Wilkinson had been acting clerk, he took care Mr Young, the Minister was gone.

He took his cane and found the poor man had made a little dirt by the close stool and he took hold of the man by the shirt collar dragged him out of bed on his back and flogged him naked except for his shirt. He kicked him and drew him all round the room, any Christian man would not use a dog like this.  We suppose the man to be nearly 60 years of age and not quite as bright as many. But there is no rule that he should be so abused.  Now in this same sick room there is no light allowed, if you are dying you must die in the dark for he will not allow you one inch of candle. If you cannot see your hand before you or cannot tell whether your spoon is right or wrong way upwards, in that way you always get your supper.

Lawyer Broadhurst upholds Wilkinson in all this roguishness because he is the fancy man [boyfriend] of Wilkinson’s wife.  This is what they are pleased to say whispering all over the House. We cannot swear [to] this but the women have seen things … They [the pair] are drinking all the day long, but [for] how much of the night we cannot tell [as] we are driven to bed at 7 o’clock and safe enough as they may think but many things are seen which they think are not known.

As for her character [the matron] she has bore that stain before time, and as for Wilkinson’s character in that respect it is most infamous, there are many women in that house which he has tried and been reported [about] several times but Broadhurst has still got him through all… Now a little of the diet.  We would ask what lawyer Broadhurst has to do with purveying or supplying food for the house?  No men but mad men would trust either him or Wilkinson with a kennel of dogs …  we do not believe it is any fault of the Guardians, but Broadhurst and Wilkinson the governor. If they were discharged the place might do very [well] with a Christian man and woman there. Now according [to the] act of parliament the diet tables are to be fixed in [a] very conspicuous place. Instead of that the inmates are not allowed to see it.  There is as good meat taken to that house ever was butchered, but when it is cooked …it is all vein and grizzle it has been said the good meat beneath finds its way to Broadhurst’s [home] by night…

There are [60] quarts of new milk per week for 80 people [which] will be about three half pints each person per week, so that divided into 10 meals will amount to little more than a half quarter for each meal. It is skimmed [fat removed from the milk] twice before they get it. They have been seen to skim [the milk] it for the cats and the cat’s dish emptied in for breakfast. The barren [Matron] keeps many cats, [they are] all she has to play with. If she doted on children as much as she does on cats it would be a good thing, but she never had any so she hates the sight of children.…

For supper, 4 times per week there should be butter but you can neither see nor taste that. 19 dishes of butter goes to that house per week. Each dish weighs one pound and half but the poor never get 3 pounds out of the 16. It is also said that goes to Broadhurst’s house. Everyone knows that they are the greatest villains breathing. It would be the greatest blessing ever to come to that house to get rid of that Wilkinson, Governor for every abomination which can be committed is practised by him in that place. We faithfully do believe the person who drives him from his harbour where as he as tyrannised poor creatures for 10 years & upwards is justified. Deceiving the gentry and public of Nantwich with his false insinuating tongue as if it was possible [that] he would deceive an angel from God now this is well known in the house.

They were both drunk every night but on Saturday night or rather on Sunday morning it is laughable to see them pulling each other upstairs and along the passage. By and by, one falls over the other, all this has been seen repeatedly but no one dare speak a word about it. We know their [income] will not half support their drinking, so the poor must suffer for [it]. If I knew how, I should think I was doing God’s justice to destroy and put down all those tyrant’s abominations and to release the poor from under the brutal hands of such villains. They all three are, especially Wilkinson, God grant the poor creatures may soon get shut of him. Please to [note] the postmark is not from this county.